The official Dragon Ball website’s forty-eighth entry in “The Nearly Complete Works of Akira Toriyama” — an on-going series highlighting rare and important pieces of the author’s work over the years — is the author’s introductory message from the 2015 Dragon Ball Super: Super Start Guide. 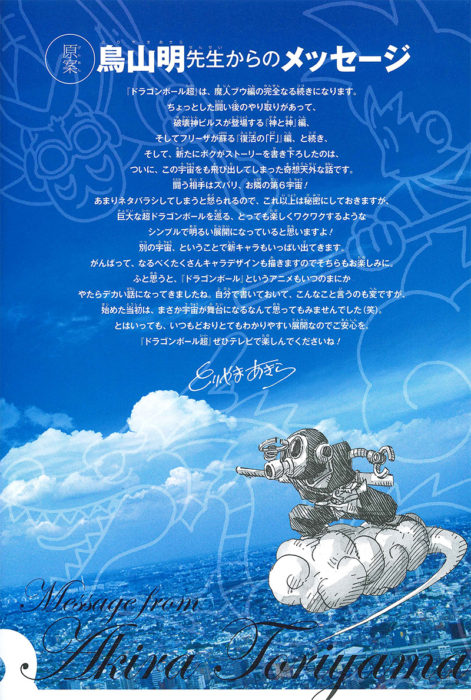 Dragon Ball Super is a complete continuation of the Majin Boo story arc. It’s got a bit of post-battle aftermath, continues with the Battle of Gods arc where the God of Destruction Beerus appears and the Resurrection ‘F’ arc where Freeza comes back to life, and then, I’ve written a strange new story where they finally depart from this universe. They’re fighting against their neighbors, Universe 6! They’ll yell at me if I give away too many spoilers, so I’ll keep the rest a secret, but they’re chasing after giant Super Dragon Balls; I think things will unfold in a bright and simple way, that will be really fun and exciting!

The message is identical to and technically originated as a part of the series’ “Completion Announcement Event” just a couple days prior, where the creative team announced their finished production on the first episode and promoted the then-upcoming series debut.

Toriyama designed the five competitors from Universe 6, which would be featured in the March 2016 issue of V-Jump the following January. That same January, Toriyama’s introductory comment for the Dragon Ball series’ 30th anniversary “Super History Book” gave a tiny glimpse into his feelings on the series at that time:

I had put Dragon Ball behind me, but seeing how much that live-action film ticked me off, and how I revised that script for the anime movie and complained about the quality of the TV anime, I suppose somewhere along the line it’s become a series I like too much to ever leave alone.

The Dragon Ball Super: Super Start Guide was released 03 July 2015 — just two days ahead of the series’ debut — and, contrary to popular belief, does not actually contain a citation on either the speed of light or vibrators.