The official Dragon Ball website’s sixty-fourth entry in “The Nearly Complete Works of Akira Toriyama” — an on-going series highlighting rare and important pieces of the author’s work over the years — is a selection from the “Cartoon Classroom” column in 1991’s Jump Gold Selection: Dragon Ball Z Anime Special II book. 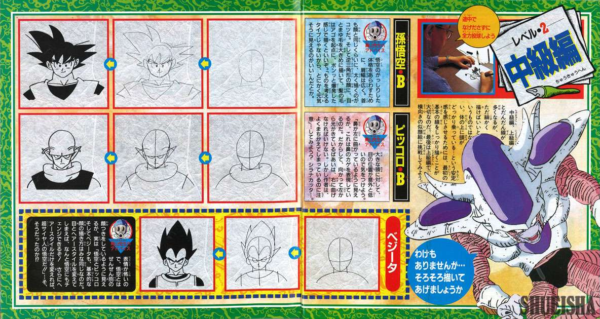 The column teaches readers how to draw Dragon Ball characters by way of Freeza also playing along, with the caveat that he will personally take care of Toriyama should he not be able to master the drawings by the end of the lesson.

In this particular section, Toriyama explains some of the intermediate-level techniques and refinements used to draw the characters Son Goku, Piccolo, and Vegeta. For Goku, Toriyama notes how he is, “…not the thinking type, so at any rate, it’s good to make him look energetic”. For Piccolo, Toriyama focuses on the nose, saying it, “…looks like it’s bent to the left, but that’s to express his nose’s shadow. Because of that, when the light is coming from the left, it has to be bent to the right.” For Vegeta, Toriyama reveals one of his secrets: “Goku’s, Piccolo’s, and even Vegeta’s faces are all basically drawn the same way. If you change the eyes and the hairstyle, he can even change into Goku! And if you change just the hairstyle, he’s Super Saiyan Goku!!”

Even with Toriyama’s expert coaching, Freeza’s drawing ability ultimately seems to be roughly in line with Jaco’s: 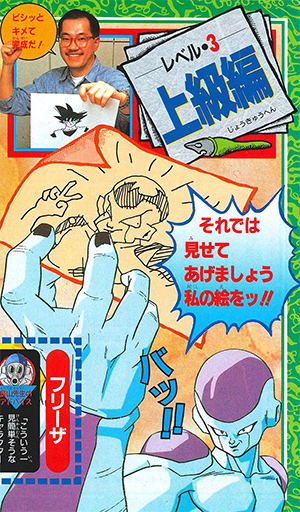 Check out our complete translation of the column for the beginner, intermediate, and advanced drawing tips for Son Goku, Piccolo, Son Gohan, Vegeta, and Freeza.