The official Dragon Ball website’s sixty-seventh entry in “The Nearly Complete Works of Akira Toriyama” — an on-going series highlighting rare and important pieces of the author’s work over the years — is the character design for “Golden Freeza” from the 2015 theatrical film, Dragon Ball Z: Resurrection ‘F’: 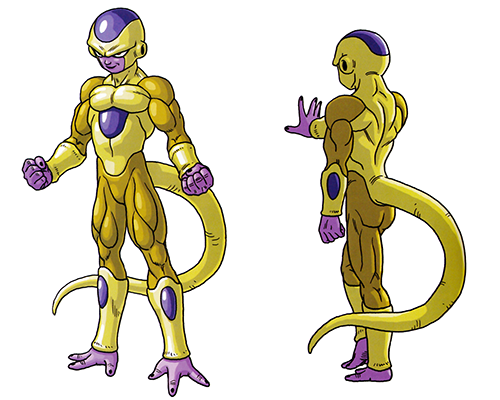 As referenced in the website’s write-up, Toriyama commented on the design in the Volume ‘F’ booklet given to theater attendees in Japan:

Since there was no way I could possibly make his design any simpler than it already was, I opted to mostly just change his color. This color feels strongest, maybe because I associate it with Gold Medals?

Freeza and his golden form returned in the film’s re-telling in the Dragon Ball Super television series, followed by his replacing Boo in the Universe 7 lineup for the Tournament of Power.