Each month, Toyotarō provides a sketch — as well as a brief comment — on the official Japanese Dragon Ball website for a character that has not yet appeared in Dragon Ball Super. Thus far, Toyotarō has provided sketches of #8, Lunch, Chapa with Oob, and Tambourine. For his April entry, Toyotarō has contributed a sketch of Man-Wolf: 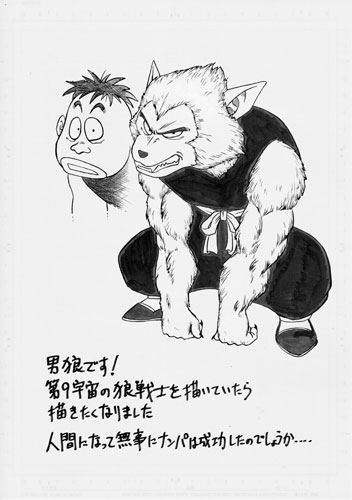 It’s Man-Wolf! Drawing the wolf fighters from Universe 9, I started wanting to draw him. I wonder if he had any success picking up girls after becoming human…

Man-Wolf originally appeared during the 22nd Tenka’ichi Budōkai, seeking revenge on the Turtle Hermit for destroying the moon at the previous tournament, thus preventing him from changing back into his human form.