The official Dragon Ball website’s seventy-sixth entry in “The Nearly Complete Works of Akira Toriyama” — an on-going series highlighting rare and important pieces of the author’s work over the years — is the reverse side of the second “Dr. Slump Hoyoyo Card” that came with the 1980 #41 issue of Weekly Shōnen Jump, released 09 September 1980 (as opposed to the publication date of 13 October 1980 listed in the official website’s writeup).

The front of each card had a full-color illustration, and the back had a character profile with a short interview with Toriyama. For this particular card, Toriyama pens an interview between himself and Arale from Dr. Slump. This particular entry was selected in honor of Arale’s May 3rd birthday (“Flying Fish 3” in Dr. Slump‘s calendar). 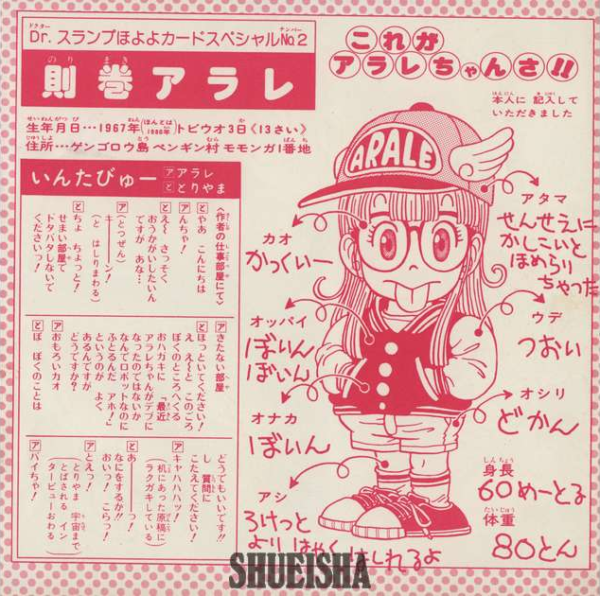 LEGS: I can run faster than a rocket

[in the author’s workroom]

TORIYAMA: Well… I’d like to get right down to asking y–…

TORIYAMA: N-never mind! Er- uhm, lately, I’ve been getting a lot of postcards saying, “Hasn’t Arale gotten fat recently? How can she gain weight when she’s a robot? You dummy!” So, what about it?

ARALE: Your face is funny.

TORIYAMA: I-I’m not concerned about me!! P-please just answer the question!

ARALE: Kyahahaha! [doodling all over the manuscript on the desk]

TORIYAMA: AAAAAUGH! What are you doing?! Hey! Knock it off!

In his author comment accompanying this issue — and chapter 37 of Dr. Slump within it — Toriyama makes a lame joke that does not work particularly well in English, but is certainly one Kaiō might appreciate:

もう秋だ。こおろぎ、ころころころがった！ おそまつでした!? ＜明＞
Autumn already. The crickets rolled over with a chirp! That was a lame joke?! ＜Akira＞
Share Post:
Tweet
Connect With Us
Support Us
Your support for Kanzenshuu is what keeps us going. You can help by donating to us directly, or by shopping online at certain retailers through our affiliate links below. Every bit counts and helps contribute to our server fees and bringing you new site content, reviews, and contest items.