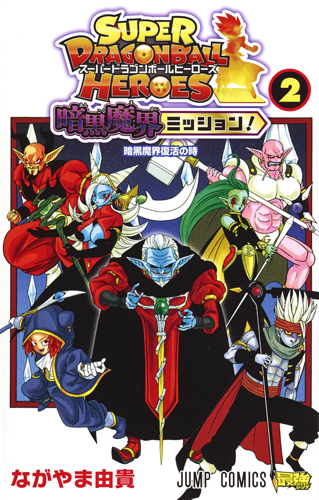 Boss Mechickaboola plots to revive the Dark Demon Realm by gathering the seven Dark Dragon Balls! Trunks and the Time Patrol, lead by the “Kaiōshin of Time”, concentrate their power to stand against him!! Dark Demon Realm Mission Part 1 reaches the ultimate conclusion!

Nagayama’s introductory comment touches on the completion of “Part 1” of the series:

Removing the dust jacket reveals separate front and back cover artwork showcasing a slew of characters from the series:

Alongside greyscaled versions of all chapter titles pages, the tenth chapter in particular features a new title page, which was originally a multi-page spread in the March 2018 issue of Saikyō Jump. Between the ninth and tenth chapters is a bonus chapter exclusive to the collected edition featuring a battle between an unmasked-and-remasked Bardock and King Vegeta: Xeno. 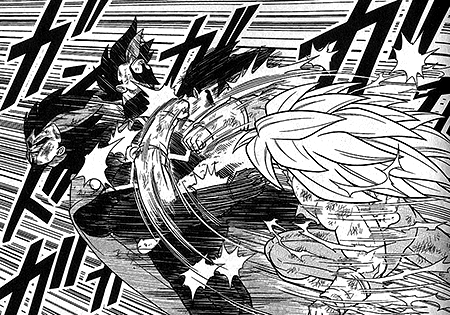 The only bonus Charisma Mission content in this volume is a set of two pages originally printed after the tenth chapter in the March 2018 issue of Saikyō Jump; where an additional two pages were present to promote Universe Mission, the collected volume instead transitions to a full-on real promotion for the new update, concluding with two entirely new Charisma Mission pages wrapping up the promotion. 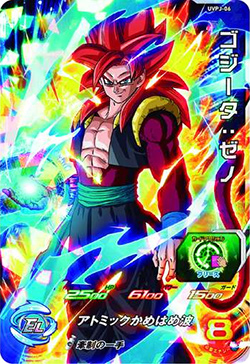 The second volume retails for ¥400 (plus tax), spans 192 pages, and is available to order on CDJapan and Amazon Japan.