The official Dragon Ball website’s eightieth entry in “The Nearly Complete Works of Akira Toriyama” — an on-going series highlighting rare and important pieces of the author’s work over the years — is, in celebration of “Dog Day” (May 13) in Japan, the author’s “Me These Days” column from the Shenlong Times accompanying the fifth Daizenshuu in 1995. In it, Toriyama tells the story of losing their Siberian Husky “Mato” due to kidney issues, and gaining a new family member in the form of their Corgi “Toma”; the name is a reversal of syllables which Toriyama first used as a joke, but caught on with his children. 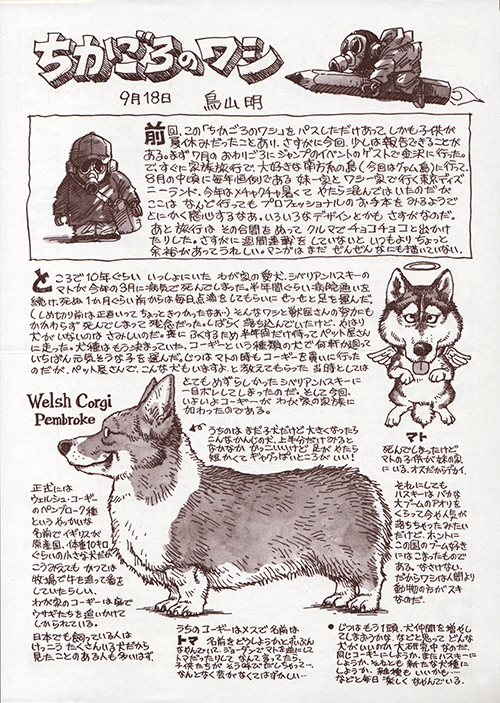 Since I passed on doing a “Me These Days” last time, and on top of that, my kids had their summer vacation, I naturally have a little to report. First off, at the end of July, I went to Kanazawa as a guest at a Jump event. Then, I immediately went on a family trip to one of those southern isles I like so much (this time, it was Guam), and in the middle of August, like we do every year, my sister’s family and mine went to Tokyo Disneyland. This year, it was ridiculously hot, and it seemed kind of crowded, but no matter how many times we go, my sister always consults a professional’s model, so I’m grateful. Naturally, I’ve been doing a variety of designs and such, as well. Also, for traveling, I used my spare time to get out here and there by car. Naturally, I’m happy to have a bit more leeway now that I’m not doing a weekly serial. I still haven’t drawn one iota of manga.

Incidentally, our family dog, a Siberian Husky named Mato who was with us for about 10 years, died of sickness this past March. For about half a year, I took her regularly to the animal hospital, and starting about a month before she died, I diligently went there every day for her intravenous treatments. (To be honest, it was a bit rough, right before deadlines…) But in spite of the vet’s and my best efforts, she unfortunately passed away. I felt down for a while, but it really is lonesome without a dog around. As a show of mourning, I waited just half a year, then rushed off to the pet store. I had already decided on the breed, called a Corgi, so I went around to a number of different places, and chose the pup that seemed the most energetic. Actually, when I got Mato, I was also looking to buy a Corgi, but at the pet store, I was told that they also had this sort of dog—a Siberian Husky, which was rare at the time—and I fell in love at first sight. And so, now, I’ve finally added a Corgi to my family.

(caption) ← Our dog is still a puppy, but when she grows up, she’ll look something like this. I like how, if you just look at the top half, it’s pretty cool, but the legs are short and stubby, like a gag!

Properly, it’s the Pembroke variety of Welsh Corgi, which is a mouthful of a name; it originated in the UK. It’s a smaller dog, with a weight of about 10 kilograms, but in spite of its appearance, it originally herded cattle on ranches, and guarded them. Our Corgi chases after the rabbits in the yard and gets scolded. Quite a few people have this dog, even in Japan, so a lot of people have probably seen one before.

Our Corgi is a female, and her name is Toma. I fretted for quite a while about what to name her, but when I said, as a joke, that we could reverse the syllables in “Mato” and make it “Toma”, my kids started calling her that…. It’s kind of artless, which is embarrassing…

• Actually, I’m thinking about maybe adding one more canine companion, so I’m reading up on what sort of dog would be best. Whether to go with another Corgi, or a Husky again, or maybe a new breed; a mutt might even be fine… every day, I entertain myself with this indecision.

(right sidebar)
Mato
She passed away, but Mato’s child[ren] live[s] at my sister’s house. It’s/They’re [a] male, so he’s/they’re huge.3

Even so, Huskies got hit with the backlash to a stupidly big boom, so now their popularity has fallen. Truly, this country’s love of fads is a problem. It’s disgraceful. That’s why I prefer animals to humans.

Be sure to read the full Shenlong Times translation!

Toriyama wrote about Mato many times during Dragon Ball‘s serialization. In his introduction to volume 11 of the collected manga, Toriyama shares a photo of himself and his son, Sasuke, while also wondering if he should share some pet photos in upcoming volumes:

This is the first time I’ve put up my photo in this section of a volume. This is me with my son, Sasuke. In putting up a picture of my son like this, it is of course true that I’m quite the doting parent, but it’s also a lifesaver, because it’s a bother always having to draw an illustration for this column. Maybe I’ll start doing this from now on, is my lazy idea. Next time, maybe I’ll use a photo of my cat Koge, or my dog Mato. Hmmm… This is nice and easy….

True to his word, Toriyama shared a photo of Mato in volume 13:

This is our family dog, Matryoshka. We took her name from the traditional Russian dolls. It’s a pain to call her “Matryoshka” all the time, though, so her nickname is “Mato”. Being a Siberian Husky, she’s quite good against the cold, so as someone sensitive to the cold, I absolutely envy her. Even though she’s female, she’s got lots and lots of energy, so my son is always crying from her pushing him around. No matter how busy I am, I play with her every day.

Toriyama shares the news of Mato’s passing alongside chapter 506:

My dear old dog finally lost the battle with her illness and went to Heaven. Please play with Goku in the afterlife.

… as well as in volume 40, released the following month:

Our nearly ten-year-old family dog Mato, whose photo was published in volume 13, has died. She had had kidney problems starting about half a year ago. Since then, I had continued taking her to the vet for her IV treatments, even on the day of my deadline, and even when I was miserable with a cold. Mato put up a good fight too, but in the end, there was really nothing we could do. Our saving grace was the kindly neighborhood vet, who devoted himself with such compassion. Thank you so very much.