The official Dragon Ball website’s eighty-third entry in “The Nearly Complete Works of Akira Toriyama” — an on-going series highlighting rare and important pieces of the author’s work over the years — is the color title page from the fifth Dr. Slump chapter (“Eeny, Meeny, Miny, Moe” or even simply “Which One Should I Choose?”; Viz adapted this as “Which Will it Be?” in their English translation), released 29 January 1980 in the 1980 No. 9 issue of Weekly Shōnen Jump: 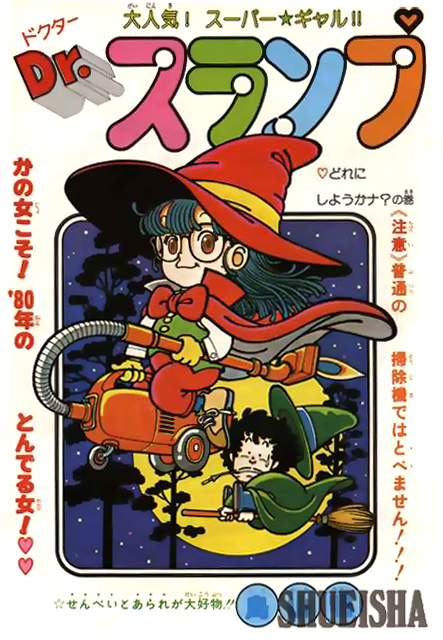 Within the chapter, Arale tries to decide which school club to join. In his comment alongside the chapter, Toriyama appears to be conducting an open search for an assistant!

名古屋近辺在住で、アシスタントできる人。建物車のカットをかいて、編集の鳥嶋氏まで連絡を！
Persons living in the vicinity of Nagoya, and capable of being my assistant. Please draw a cut of buildings and cars, and contact my editor Torishima!

The first time Toriyama mentions his first assistant (Hisashi “Hiswashi” Tanaka) in a Jump comment comes alongside chapter ten just a few weeks later. Toriyama has mentioned in interviews that, when starting out, he had no idea about using assistants, among other things Japanese cartoonists generally treat as a given. Even after procuring an assistant, Toriyama never had more than one at a time, and preferred to work by himself on the shorter serials following Dragon Ball.