FUNimation’s online shop reveals an 02 October 2018 release date for their fifth part of the Dragon Ball Super television series on DVD and Blu-ray. 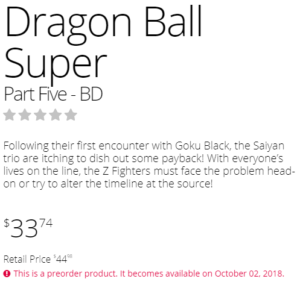 Following their first encounter with Goku Black, the Saiyan trio are itching to dish out some payback! With everyone’s lives on the line, the Z Fighters must face the problem head-on or try to alter the timeline at the source!

The bilingual (English/Japanese) two-disc set will span episodes 53 to 65 and is slated to contain 17 minutes of bonus material. The set will retail for $39.98 MSRP on DVD and $44.98 MSRP on Blu-ray.