A new Amazon listing for Viz’s fourth volume of the Dragon Ball Super manga’s print edition is dated for 01 January 2019 at a $9.99 MSRP. A digital edition will also be available at various retailers, including Amazon, Comixology, and direct from Viz. 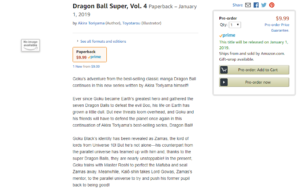 Goku Black’s identity has been revealed as Zamas, the lord of lords from Universe 10! But he’s not alone—his counterpart from the parallel universe has teamed up with him and, thanks to the super Dragon Balls, they are nearly unstoppable! In the present, Goku trains with Master Roshi to perfect the Mafuba and seal Zamas away. Meanwhile, Kaiô-shin takes Lord Gowas, Zamas’s mentor, to the parallel universe to try and push his former pupil back to being good!

The fourth collected edition is expected to cover chapters 21-24 a la its Japanese counterpart.

The Dragon Ball Super “comicalization” began in June 2015 as a promotional tie-in for the television series. The manga runs monthly in Shueisha’s V-Jump magazine, with the series’ thirty-ninth chapter coming earlier this week in the magazine’s October 2018 issue. Illustrated by “Toyotarō” (in all likelihood, a second pen-name used by Dragon Ball AF fan manga author and illustrator “Toyble”), the Dragon Ball Super manga covered the Battle of Gods re-telling, skipped the Resurrection ‘F’ re-telling, and “charged ahead” to the Champa arc to act as further promotion for the television series. Though the television series has completed its run, the manga continues onward telling its own version of the existing story. Viz is currently releasing free digital chapters of the series, and began their own collected print edition early last year.

Viz is also set to release their translation of Dragon Garow Lee’s That Time I Got Reincarnated as Yamcha! manga this November.