This week’s December 2018 issue of Shueisha’s V-Jump magazine includes a tiny splash announcing that the eighth collected volume of the Dragon Ball Super manga will release in Japan 04 December 2018. The company’s subsequent online listing notes a ¥440 + tax price point. No specific chapter count is cited, though recent volumes have spanned four chapters at roughly 192 pages each. 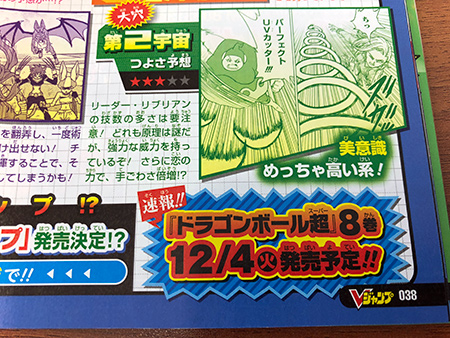 The volume will pick up with the thirty-seventh chapter of the series. The series’ seventh collected volume saw its release in Japan last month spanning chapters 33-36.

The Dragon Ball Super “comicalization” began in June 2015 as a promotional tie-in for the television series. The manga runs monthly in Shueisha’s V-Jump magazine, with the series’ forty-first chapter coming earlier this week in the magazine’s December 2018 issue. Illustrated by “Toyotarō” (in all likelihood, a second pen-name used by Dragon Ball AF fan manga author and illustrator “Toyble”), the Dragon Ball Super manga covered the Battle of Gods re-telling, skipped the Resurrection ‘F’ re-telling, and “charged ahead” to the Champa arc to act as further promotion for the television series. Though the television series has completed its run, the manga continues onward telling its own version of the existing story. Viz is currently releasing free digital chapters of the series, and began their own collected print edition early last year. The third collected volume was released in English from Viz this summer.

The Dragon Ball Super television series concluded in March 2018 with 131 total episodes. FUNimation owns the American distribution license for the series, with the English dub airing on Cartoon Network, and the home video release reaching its fifth box set this month.