Each month, Toyotarō provides a sketch — as well as a brief comment — on the official Japanese Dragon Ball website for a character that has not appeared in Dragon Ball Super. Thus far, Toyotarō has provided sketches of #8, Lunch, Chapa with Oob, Tambourine, Man-Wolf, Tapion, Janenba, Broli, Ozotto, Ginyu, Bardock, Paragus, and King Cold. For his January 2019 entry, Toyotarō has contributed a sketch of Bardock’s crew of Toma, Totapo, Selypa, and Pumbukin from the original television special (with a special tie to this year’s Dragon Ball Super theatrical film): 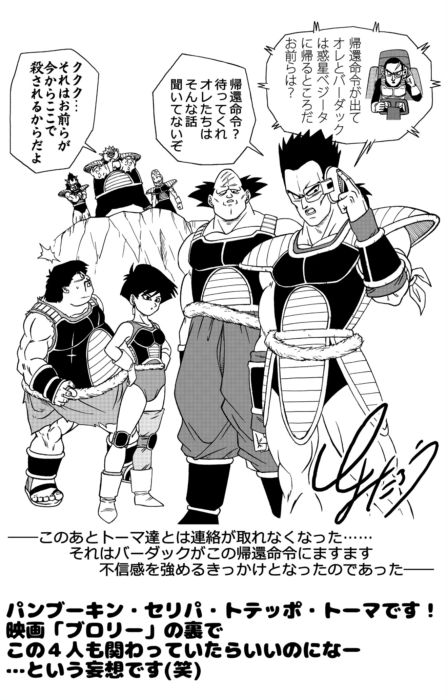 LEKE: There’s been an order to return home, so Bardock and I are about to head back to Planet Vegeta. What about you guys?

TOMA: A return-home order? Wait just a minute! We haven’t heard anything of the sort.

DODORIA: Heh heh heh… That’s because you’re all about to die right here and now.

NARRATOR: After this, they lost contact with Toma & co… That is the event that caused Bardock’s suspicion of this return-home order to grow ever-stronger.

TOYOTARŌ: It’s Pumbukin, Selypa, Totapo, and Toma! It seems like these four were involved off in the background of the Broly movie… or at least that’s how I imagine it. (laughs)

Originally designed for and debuting in the franchise’s first major television special in 1990, Goku’s father Bardock has been repurposed many times in recent years, most recently for the Dragon Ball Super: Broly theatrical film, itself adapting the underlying source material from Akira Toriyama’s 2014 “Dragon Ball Minus” bonus chapter from the Jaco the Galactic Patrolman collected edition. Whereas the original television special sees Bardock arriving to find his four teammates slaughtered by Dodoria & co., the updated story sees Bardock in a sequence of mostly one-one-one interactions with Leke and his wife Gine before hopelessly firing back against Freeza’s killing blast.