Videl and Jiren join the cast 31 January 2019, with the latest versions of Broli and Gogeta from the current Dragon Ball Super theatrical film also coming at a later date. The promotional video implies at least two more characters have yet to be revealed.

Jiren has been teased over the last few weeks alongside the forthcoming “Game Project Z” as well as in last week’s March 2018 issue of Shueisha’s V-Jump magazine in Japan: 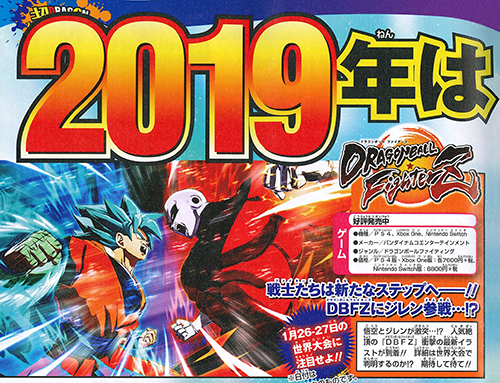 Similar to Dragon Ball XENOVERSE 2‘s update last month, Dragon Ball FighterZ is set to include the new version of Broli alongside the original version, who was introduced in the initial season pass last year.

The 3-on-3, “2.5D” fighting game is developed by Arc System Works and is currently available on the PlayStation 4, Xbox One, PC (via Steam), and Nintendo Switch. Playable characters include Son Goku, Son Gohan (Cell arc design), Vegeta, Freeza, Cell, Boo (Good), Trunks, Piccolo, Kuririn, #16, #18 (with #17), Yamcha, Tenshinhan (with Chiaotzu), Ginyu (with teammates), Nappa (with Saibaimen), Gotenks, Son Gohan (Boo arc design), Boo (Pure), Hit, Beerus, and Goku Black (with Zamasu), as well as “Super Saiyan God Super Saiyan” (SSGSS, or “Super Saiyan Blue”) versions of Goku and Vegeta that can be accessed early via pre-orders or unlocked through gameplay. The Akira Toriyama-designed “#21” is a new character central to the game’s story mode.

Dragon Ball FighterZ was originally released 26 January 2018 in North America and Europe, and 01 February 2018 in Japan, with the Switch release coming later in September. Alongside its Japanese release, Bandai Namco announced that they had shipped two million copies of the game, making it the fastest-shipping game in the franchise’s history.