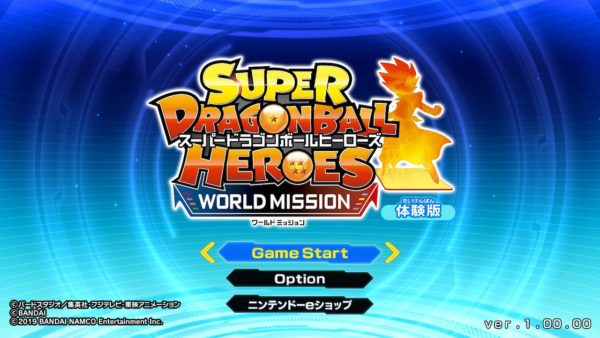 The demo version contains introductory story mode scenarios, a selection of pre-set missions, and a glimpse at the card creation mode. The demo version is exclusive to the Japanese eShop, and while it offers no additional language options, is fully playable on alternate regional accounts provided a Japanese account is created to initially download the demo.

Super Dragon Ball Heroes: World Mission, developed by Dimps for Bandai Namco, is a home version of the ongoing Super Dragon Ball Heroes card-based arcade game in Japan. Due out 04 April 2019 in Japan and 05 April 2019 internationally, World Mission will see a release on the Nintendo Switch and PC (via Steam) covering the eight base “Super Dragon Ball Heroes” missions and first two “Universe Mission” series updates. The game is set to feature an original story with Shiirasu, an antagonist with the Galatic Patrol insignia who arrives at the Time Nest speaking of “justice” to Trunks and the Kaiōshin of Time. Designed by Toyotarō, the character’s official “English” name spelling has been revealed as “Sealas”; the name in Japanese is likely a play on whitebait, fitting alongside other, similar Galactic Patrol-related names.

The North American Nintendo Switch edition of Super Dragon Ball Heroes: World Mission is available for pre-order on Amazon; digital pre-orders have yet to go live outside of Japan.