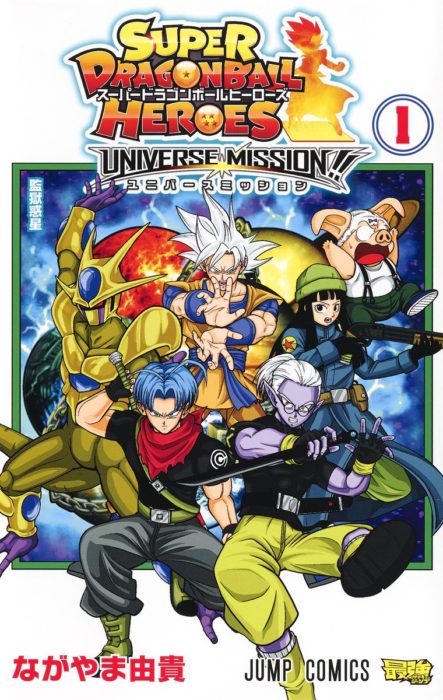 Under the dusk jacket, the volume’s front and back illustrations showcase additional characters from the story, including the various villains trapped on the Prison Planet:

In his introductory comment, Nagayama explains his profile illustration:

I just wanted to picture myself in Oolong’s costume. I, Yoshitaka Nagayama, have no interest whatsoever in a gal’s panties.

The inside title page showcases Trunks relaxing while Goku and Vegeta train, and Mai prepares a meal. 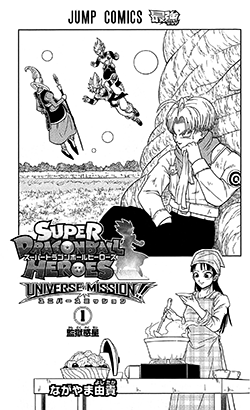 Nagayama dedicates two pages to special thanks including his assistant Atsushi Kuguno, V-Jump editor (and mascot) “Victory Uchida”, volume editor Naomi Maehara of Yuki Design, volume designer Yōko Nose of Banana Grove Studio, the entire Dragon Ball Heroes team at Bandai Namco, Akira Toriyama himself (without whom none of this would be possible), and all Dragon Ball fans everywhere. Two final pages promote arcade game content; no additional manga material is collected in this volume.

This first volume of the collected edition is available for purchase via CDJapan and Amazon Japan.

Yoshitaka Nagayama debuted in a supplemental booklet packed in with the December 2013 issue of Saikyō Jump, with Dragon Ball Heroes: Rookie Charisma Mission Episode 0 depicting the daily life and “training” of Engineer Yoshito and new Battle Navigators Tsubasa and Momo-chan in a cartoony style. The series eventually received its own standard serialization in Saikyō Jump, running in earnest from the July 2014 to July 2016 issues. With the cancellation of Katsuki Hirose’s Dragon Ball Discross Divine Power God MAX!! manga series (due to the Discross arcade game’s official discontinuation), Nagayama returned with Super Dragon Ball Heroes: Ultimate Charisma Mission!! in the March 2017 issue, which has been running alongside the standard manga fare ever since.

Nagayama’s major follow-up, Super Dragon Ball Heroes: Dark Demon Realm Mission!, began in the September 2016 issue of Saikyō Jump telling a new story set in the Super Dragon Ball Heroes world with Time Patrol Trunks, the Kaiōshin of Time, and more. The series’ tenth chapter (later renumbered as its eleventh courtesy of a bonus chapter) was serialized in the March 2018 issue, which simultaneously marked it as the “End of Part 1” while the table of contents listed it as the “final chapter”.

Independent of Universe Mission, Nagayama announced on Twitter that Dark Demon Realm Mission! would return to Saikyō Jump starting with the May 2019 issue (beginning “Part 2”), and will run for the foreseeable future alongside Universe Mission. Both series clocked in at roughly 30 pages each in the issue.

Nagayama’s Dark Demon Realm Mission! and Universe Mission manga series, as well as the ongoing “Promotional Anime” series, all adapt story content from the arcade version of Super Dragon Ball Heroes, which saw the eighth update in its own “Universe Mission” series this week.