In conjunction with Tokyo Game Show 2019 this week, Bandai Namco revealed both the domestic (16 January 2020) and international (17 January 2020) release dates for the forthcoming Dragon Ball Z: Kakarot video game, alongside various bonus items available to those pre-ordering either the standard or “Collector’s Edition” versions of the game.

All pre-orders of the game will come packed with access to the sub-quest “A Competitive Party With Friends” (仲間たちの危険なパーティー in the Japanese edition), early access to training with Bonyu (a new character designed by Akira Toriyama, debuting here as an ex-Ginyu Special-Squad member), and a cooking item that boosts melee attack power and health points. 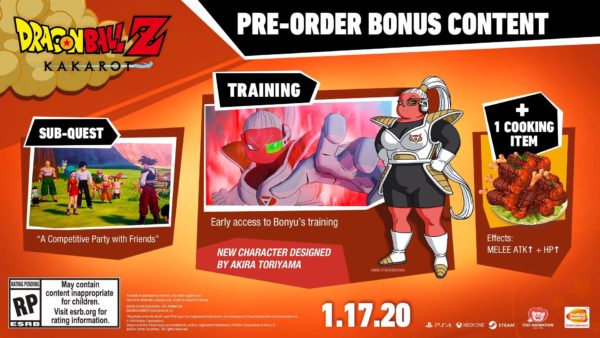 A “Collector’s Edition” priced at $199.99 will also be released for the console editions, which is set to include an 8x8x8-inch diorama, a 10×12-inch hardcover artbook, a steelbook case, and a copy of the game. 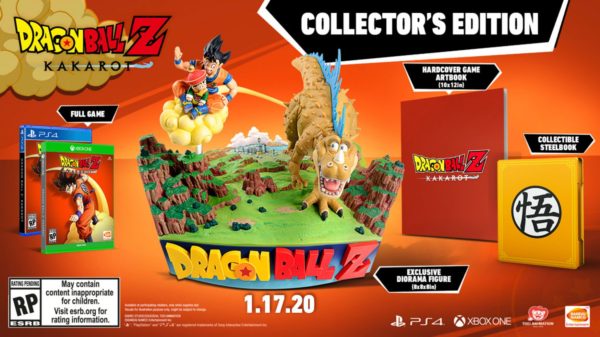 Additionally, the company announced that Dragon Ball Z: Kakarot will cover from the Saiyan arc straight through to the Boo arc of the original series.

Developed by CyberConnect2 for Bandai Namco, the action role-playing game is set for release on the PlayStation 4, Xbox One, and PC (via Steam). The game will retail for ¥7,600 + tax in Japan, where the Xbox One edition will be a download-only version.