Last month’s September 2021 issue of Shueisha’s Saikyō Jump magazine kicked off a new “Dragon Ball Super Gallery” series in commemoration of the Dragon Ball franchise’s upcoming 40th anniversary. The new celebration aims to have different artists all contribute their own spin on the original 42 tankōbon covers, with the images and an accompanying comment published as part of the magazine.

Following the initial entry from Masashi Kishimoto, this week’s October 2021 issue of Saikyō Jump brings a new entry from Tite Kubo (Bleach), with his take on the series’ 27th volume cover: 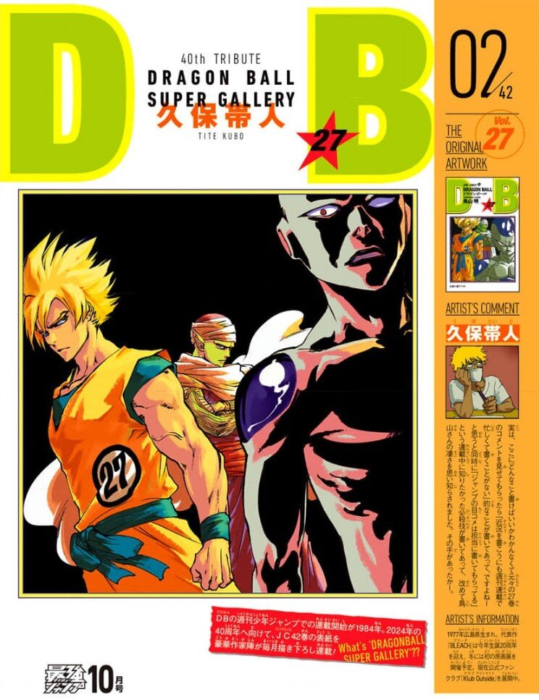 The truth is, I didn’t know what I ought to write here, so I took a look at the author comment for the original Volume 27, and it said something like, “I’m supposed to write about what I’ve been up to recently, but I’ve been so busy with the serial that I don’t have anything to write about.” ‘I know, right?’ I thought, but at the same time, it also said something like, “I have my editor write the comments in the Jump table of contents,” which is a killer move that I would have loved to know about during my own serial. That reminded me once again of how awesome Toriyama-sensei is. To think I could’ve done it like that…

To be honest, all this author has to say is, I’m always stuck for something to write here. When you’re busy working on a weekly serial, it’s not like there’s going to be anything all that special to write about. What’s even more painful is the “author’s comment” blurbs on the table of contents page in the back of Shōnen Jump. This is a secret, but for at least half of those comments, I let my editor Kondō-san write them for me. Every week, he asks me, “Anything to talk about?” But I’ve got nothing.

Saikyō Jump (“The Strongest Jump”) is currently a monthly magazine published in Japan by Shueisha under the “Jump” line of magazines. The magazine began as a quarterly publication in 2012, went monthly in 2013, went bimonthly in late-2014, and returned to a monthly format last month (including a digital release for the first time). The magazine’s focus is spin-off and supplementary manga series aimed at a young audience, while also including game promotions, news coverage, and more. The magazine currently serializes content such as Yoshitaka Nagayama’s Super Dragon Ball Heroes: Big Bang Mission!!! and the Dragon Ball GT Anime Comic. For calendar year 2018, Saikyō Jump‘s readership comprised of 58.5% in upper elementary school, 28% in lower middle school, 11% in middle school, and 2.5% in high school or older.

Kubo is a long-time fan of the Dragon Ball franchise, noting Akira Toriyama as a source of inspiration. The first run of kanzenban editions of the Dragon Ball manga released from 2003 to 2004 included bonus pamphlets, with every other volume featuring a tribute image and comment from a fellow manga author/artist. Kubo took the sixth slot with an image of Piccolo, Vegeta, Trunks, Zarbon, Recoome, and Tao Pai-pai, noting at the time how much he loved the Dragon Ball villains: 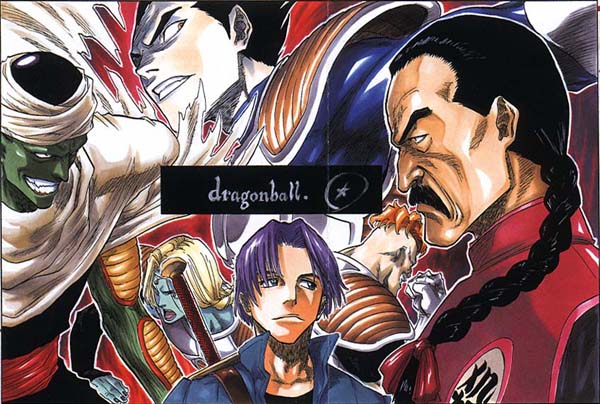