With the release of Dragon Ball Super manga chapter 77, Bardock — “Burdock” if you rather… or, heck, even “Barduck” — is back in the fandom chatter all over again. 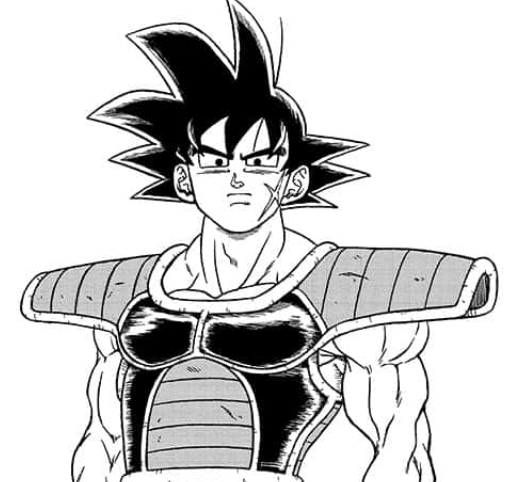 This isn’t actually about how you spell the character’s name, though — that’s another story for another time! For now, let’s talk about titles.

Dragon Ball Super manga chapter 77 is titled 悟空の父 バーダック in Japanese, rendered in Viz’s official English translation as “Bardock, Father of Goku”. That English title might sound a little familiar. Is it just a coincidence?

A quick crash course on furigana may be necessary here:

Little hiragana or katakana characters above kanji are meant to act as a pronunciation guide, particularly for younger readers and learners. These are especially helpful for kanji that may have different readings. In the case of many Dragon Ball phrases, furigana is commonly used for: (1) indicating a Chinese versus Japanese pronunciation [see: the Dragon Balls themselves having Chinese pronunciations], or (2) providing an alternate reading for a word that has the same meaning.

This second case is used so often in Dragon Ball that you may not even realize it: “Super Saiyan” is actually written as 超サイヤ人, which might normally be read in Japanese as Chō Saiya-jin… but the スーパー (sūpā) furigana consistently written above 超 tells us to read it as the English word “super”!

(This phrasing is played with, such as in the closing theme to Dragon Ball Z movie 13, which uses the phrase “Chō Saiya-jin pawā!“) 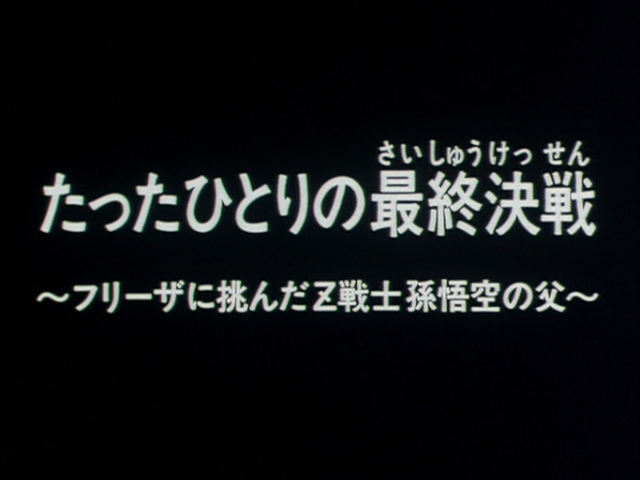 …except that’s not exactly it.

When read aloud in its next-episode preview, Masako Nozawa (in-character as Goku) reads that final section — which isn’t actually present on-screen in text in this preview — aloud not as “Son Gokū no Chichi” (“Son Goku’s Father”), but as “Kakarotto no Chichi” (“Kakarrot’s Father”).

This additional reading is backed up by newly-added furigana in things like its Daizenshuu 6: Movies & TV Specials entry, as well as the special’s own anime comic release.

This is why our own guides list a romanization of Kakarotto for 孫悟空 in this particular instance rather than Son Gokū:

When FUNimation brought the Bardock television special stateside — first on VHS in November 2000, then bilingual on DVD in January 2001 — it received a fairly simplified title of: Bardock — The Father of Goku

Concise, easy to remember, rolls off the tongue nicely. It’s even a nice simplification of the second half of the Japanese title in a way, just prefacing “Bardock” in there where his actual name wasn’t originally there.

This brings us back to the Dragon Ball Super manga chapter and any possible reference it may have. In Japanese, the chapter 77 title is:

There is indeed furigana atop some of the kanji, guiding us to a full pronunciation of Gokū no Chichi Bādakku. There’s a space between that first part and second part, which we could adapt in a few ways, such as with a comma or a semi-colon depending on how you want to order the possessive. A pretty standard and straightforward translation of this might be “Goku’s Father, Bardock” or “Goku’s Father: Bardock”. You could even flip the order to “Bardock, Goku’s Father” and maintain the same meaning; Viz went with “Bardock, Father of Goku” in this same vein.

So Is That A Reference To Anything?

It is also worth asking whether or not the chapter title in Japanese is a reference to FUNimation’s English title. It seems like a stretch: would Toyotarō even be aware of that English-language title, nevermind feel the need to directly backward-reference it in Japanese? Perhaps surprisingly, Toyotarō — under his old pen-name “Toyble” in the Dragon Ball AF days — penned a blog post in 2006 where he shared his experience importing FUNimation’s DVD of the Bardock special, which at that time was not yet available separately in Japan! (After its inclusion in the first Dragon Ball Z Dragon Box in 2003, the Bardock TV special would see a stand-alone DVD release with the Trunks TV special as the “Special Selection DVD” in 2011.) 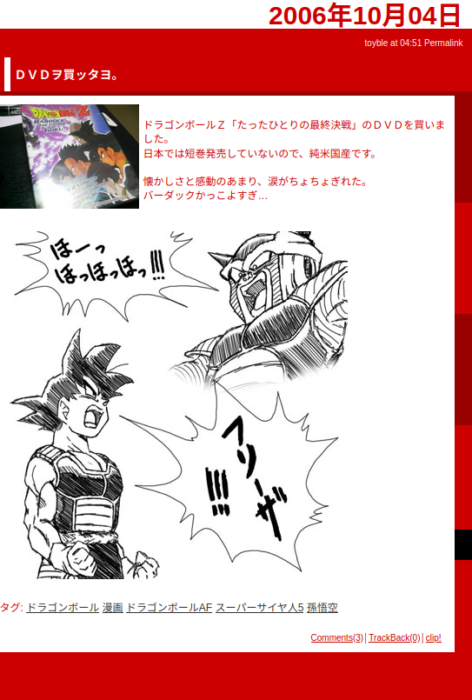 This, of course, does not actually prove anything any which way as being an intentional reference or not, but it certainly increases the probability.

As for Viz’s specific title verbiage choice, it could certainly be a reference back to FUNimation’s title for the 1990 television special, particularly with the way it rearranges Bardock’s name to be first followed by the specific phrasing “Father of Goku” (rather than, say, “Goku’s Father”). Loathe as we may be at times to want to assign the word “iconic” to anything out of an international localization, “Bardock — The Father of Goku” is a fairly solid and memorable title, and one worth referencing if the glove fits.

The manga chapter title is also incredibly basic and could be a simple statement, devoid of any deeper meaning or intentional reference. (But that’s no fun!)

And hey, if you think the Bardock title history is interesting, you’re not going to believe where the title “The History of Trunks” actually came from…

(NOTE: We were disappointed to see Viz change their established “Burdock” spelling to “Bardock” last month in the Dragon Ball Super manga digital simulpub, which carried forward to chapter 77 this month. We are constantly reevaluating our house style guide, and have made waves of changes over the years both preceding our fusion — back in the separate Daizenshuu EX and Kanzentai days — and following it in the current Kanzenshuu era. The “Burdock” spelling has major precedent and is more in line with the pun and source word spelling, and as such, may be something we switch to in the future.)