In conjunction with the Dragon Ball Super panel held at Jump Festa ’22 on December 18th, and following the release of the film’s key visual the day prior, the official “Dragon Ball Super: Super Hero” website has been updated with loads of new information. Since its announcement the film has only been slated for a 2022 premiere, but is now officially set to premiere on 22 April 2022 in Japan. There are still no international release dates set at this time. The release date is also prominently featured in a new trailer, which debuted at Jump Festa and has since been added to the film’s official site. Unlike the film’s previous trailer, which featured footage playing over background music, this trailer is the first to contain actual dialogue.

The official site has also been updated to include a brief teaser synopsis of the film, which is translated below:

Since then, four years have passed. Now, the newest movie in the Dragon Ball Super series reaches a new “awakening”.

Long ago, Goku destroyed the evil organization, the Red Ribbon Army. Now, those who kept its ideals alive have created the newest, strongest artificial humans, Gamma 1 and 2. These artificial humans call themselves “superheroes” and start attacking Piccolo, Gohan, and the others…

What is the goal of this “New Red Ribbon Army”?

Before this impending crisis, now is the time to awaken! Superhero!

While the introduction synopsis does note that four years have passed, it should be noted that they are speaking in terms of real-world time since the premiere of Dragon Ball Super: Broly in 2018, not within the context of the series timeline itself. Following the introduction are several short character biographies, which include the character’s corresponding voice actor. They also provide some additional context to the film’s plot, which will center around the “New” Red Ribbon Army. These have also been graciously translated by our good friend Zenpai.

A Saiyan raised on Earth. Even after his battles with Jiren and Broli, he still strives for even greater heights!! He is currently hard at work training under Whis.

Son Goku’s eldest son. While he harbors greater potential than even Goku and Vegeta, he dislikes fighting and is enjoying a peaceful life as a scholar.

A Namekian and the reincarnation of Demon King Piccolo. He’s also a former arch nemesis of Goku. He is Gohan’s master and currently training Pan.

The prideful Saiyan prince and Trunks’ father. In order to one day best Goku, he is hard at work training with him under Whis.

Gohan and Videl’s first-born daughter. While she is only three years old, she is being trained by Piccolo and showing signs of great potential.

The first artificial human created by Dr. Hedo. He sports a red cape. He has a very strong sense of loyalty and a calm and collected personality.

The second artificial human created by Dr. Hedo. He sports a blue cape. He has a somewhat easy-going personality which sometimes gets him scolded by Gamma 1.

President of Red Pharmaceuticals, the public front of the current Red Ribbon Army. He plans to contact Dr. Hedo in order to rebuild the army.

Magenta’s aide and driver. His big pompadour is his distinguishing feature.

Falling in-line with the family of Red Ribbon Army character name puns, Magenta and Carmine take their names from these colors, which are also the same colors as the suits they wear. And similar to Dr. Gero, the former scientist of the Red Ribbon Army whose name is believed to be a pun on a Japanese word for “vomit”, Dr. Hedo’s name also appears to be based on another Japanese word for vomit.

As far as the cast is concerned, all of the normal hero voices we have come to know and love are listed. However, as with most films, a majority of the new characters will be voiced by actors new to the Dragon Ball franchise. While Gamma 1 will be voiced by Hiroshi Kamiya, who portrayed minor characters Pobel and Long in Dragon Ball GT, his easy-going Gamma 2 counterpart will be voiced by newcomer Mamoru Miyano, who is perhaps best known for his portrayal of protagonist Light Yagami in the Death Note series. Other newcomers include Miyu Irino and Ryōta Takeuchi, both of whom bring several years of voice acting experience to their roles. Volcano Ōta returns, having previously joined the cast to fill a few minor roles in the Dragon Ball Super TV series, to provide what is presumably his most significant role to date in the franchise as the leader of the “New” Red Ribbon Army. Also returning is Yūko Minaguchi, once again reprising her role as the original Pan from Dragon Ball Z and Dragon Ball GT, although she had previously covered Pan’s brief appearances in Dragon Ball Super episode 68. Also listed as cast on the official site are Aya Hisakawa, who replaced the late Hiromi Tsuru as Bulma, Mayumi Tanaka (Kuririn), and Takeshi Kusao (Trunks). 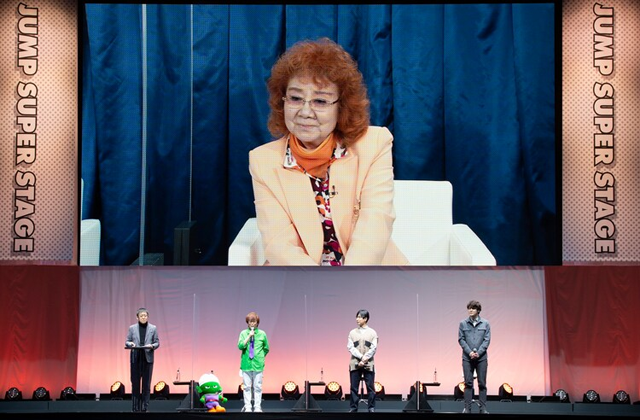 During her virtual appearance on the “Jump Super Stage” at Jump Festa ’22, voice actor Masako Nozawa shared a new comment from original author Akira Toriyama with the audience. Later in the event she, along with voice actors Toshio Furukawa, Hiroshi Kamiya, and Mamoru Miyano, provided their own comments on the new movie, which have all since been added to the official site’s news section.

Hello, everyone! I’m Akira Toriyama, the creator. For this latest animated film, Dragon Ball Super: Super Hero, the “super” bit is kind of redundant, but you should absolutely be able to enjoy the content of it! This time out, I’ve done some of the designs, story, and dialogue, but more importantly, the quality of the animation in particular for this one is amazing!

At the present time, even I’ve only seen a handful of images, but they really moved me. I’m waiting with bated breath alongside all you fans for opening day, which is now only a little ways out!

All the movies so far were obviously pretty good, but this one is great on a world level!! And as you could see from the trailer, Gohan is going to play a very active part in this movie. He’s been doing nothing but studying lately, but in order to fight the Red Ribbon Army, we’ll be able to see him taking things seriously for the first time in a while! And I would like you all to pay close attention to his conversations with Piccolo-san. Even though he’s been with us for such a long time, we’ll be able to see Piccolo-san’s house for the first time! Look forward to it!

This movie has an exceptionally good balance between the battles and the drama. Not to mention! The quality of the visuals is pretty high. I can definitely state that they’re the best so far!! Lately, Piccolo’s been acting like sort of a housekeeper, but this time we’ll be able to see him fight a lot. Gohan is also pretty active in this movie, but there are a lot of scenes where he fights together with Piccolo, which is definitely one of the highlights. It comes out in April, so it’s just around the corner! Please look forward to it.

It’s been more than 20 years since I played a part in Dragon Ball GT (1996), which was my first role in the Dragon Ball series. This is very uncharacteristic for me, but I’m super nervous. With just one glance, you can tell that Gamma 1 is a character created by Akira Toriyama-sensei: simple, yet stylish. He’s an artificial human from the Red Ribbon Army, but he’s a pretty cool superhero. I’m working on a franchise I love with people I also love, so I’m really happy that I continued being a voice actor! Even I can barely wait for the premiere!

I’m playing a part in Dragon Ball!! Back when I was in primary school, every time I came back home, I’d put on videos of the Red Ribbon Army arc. To think that there would come a point in my life when I’d be able to play a part in this franchise, I am so happy that I can’t stop shaking. Piccolo-san is a character I really like, to the point that it’s almost like I’ve also been raised by him (laughs). Gamma 2 is a character overflowing with Akira Toriyama-sensei’s worldview. Compared to Gamma 1, he’s a superhero that gets easily carried away and tries to strike cool poses. I’d be really happy if you could pay close attention to him!

In addition to the cast announcements, the film’s main staff has also finally been unveiled:

As expected, the upcoming film’s animation staff primarily consists of individuals heavily involved with CG animation. The film’s director will be Tetsuro Kodama, who was most recently the CG Sequence Director for the Dragon Ball Super: Broly film. Hoon Jung-jae will also be taking over the CG Director role after being a CG effects artist in the preceding two films, Battle of Gods and Resurrection ‘F’. The film will also bring a few newcomers to the regular Dragon Ball staff, one of which is Naoki Satō, who will be composing the theatrical score to the movie. He is a well known composer having provided the music for several live-action films and popular anime series, including Toei Animation’s first five Pretty Cure TV series.

Taking over as animation supervisor, and presumably also the role of character designer, is veteran animator Chikashi Kubota, who served as a key animator in the most recent Broli film and is more recently best known for his work on the One Punch Man series as its character designer and chief animation supervisor. He is a noted fan of the Dragon Ball franchise, having watched the original broadcast as a kid, and has cited it in the past as a major influence in his pursuing a career in animation. Shortly after the announcement of his involvement, he took to Twitter to express his excitement, saying “In Nozawa-san’s words, I’ll work hard to make it the ‘best in the world’!!”

And after all that, it’s now only a matter of time before news is shared about international releases. So stick around, because we will be sure to keep you updated with the most accurate information as more news and sections of the official website become available!