Continuing onward from previous chapters, Shueisha and Viz have added the official English translation of the Dragon Ball Super manga’s eighty-fifth chapter to their respective Manga Plus and Shonen Jump services, continuing the brand-new “Granolla the Survivor arc”. Alongside other initiatives including free chapters and a larger archive for paid subscribers, this release continues the companies’ schedule of not simply simultaneously publishing the series’ chapter alongside its Japanese debut to the release date, but to its local time in Japan alongside its serialization in today’s August 2022 issue of Shueisha’s V-Jump magazine. 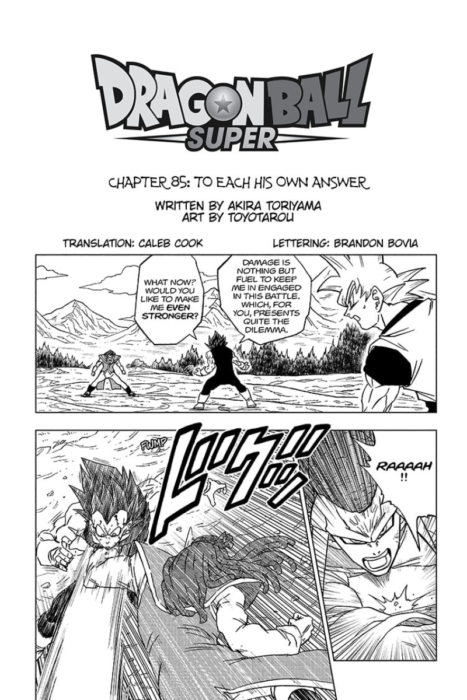 The Dragon Ball Super “comicalization” began in June 2015, initially just ahead of the television series, and running both ahead and behind the series at various points. The manga runs monthly in Shueisha’s V-Jump magazine, with the series’ eighty-fifth chapter coming today in the magazine’s August 2022 issue. Illustrated by “Toyotarō” (in all likelihood, a second pen-name used by Dragon Ball AF fan manga author and illustrator “Toyble”), the Dragon Ball Super manga covered the Battle of Gods re-telling, skipped the Resurrection ‘F’ re-telling, and “charged ahead” to the Champa arc, “speeding up the excitement of the TV anime even more”. Though the television series has completed its run, the manga continues onward, moving into its own original “Galactic Patrol Prisoner” and “Granolla the Survivor” arcs. Viz is currently releasing free digital chapters of the series, and began their own collected print edition back in 2017; the company’s sixteenth collected volume is due out in August 2022.

The Dragon Ball Super television series concluded in March 2018 with 131 total episodes. Crunchyroll (by way of the merger with FUNimation) owns the American distribution license for the series, with the English dub having wrapped its broadcast on Cartoon Network, and the home video release reaching its tenth and final box set in 2020. A complete steelbook “Limited Edition” is due from Crunchyroll this coming September.