Since the serialization of Dragon Ball began in November 1984, hundreds of individuals have been involved with the series’ production, through both the manga and its various animation adaptations. This guide has been compiled to catalog the individuals, companies, and studios involved with the series’ animated adaptations, providing an easily accessible database of production staff and their various roles. 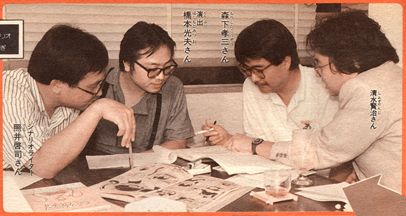 Prior to sifting through the various sections in this guide, it is highly recommended that you familiarize yourself with the General Credit Overview page listed below. This supplemental mini-guide provides a general overview of how typical episode credits are structured and how to interpret them. It will also present you with a list of common staff positions found throughout the Dragon Ball franchise and a brief look at their respective responsibilities.

From beginning to end, the production of an animated episode can be a lengthy and arduous process. The first information section of this guide provides detailed overviews of the traditional and modern animation processes, examining how a typical episode of Dragon Ball and Dragon Ball Z were produced in the late-1980s and how modern productions, such as “Battle of Gods” and Dragon Ball Super, are currently being produced. The next section details the various staff positions, including their roles, responsibilities, and general involvement throughout the various stages of production. The final section explores the variability in animation quality by examining the term “on-model” and when its usage is appropriate, as well as defining the differences between “bad animation” and “bad artwork”.

While the above sections of the guide provide general information about the production processes and techniques utilized to produce the Dragon Ball franchise’s various animated features, the following sections document the individuals actually responsible for their production. As with any long-running franchise, the amount of staff involved throughout its production is enormous. The database provided has been compiled to provide an easily navigable listing of all the animation staff involved with the Dragon Ball franchise. The database is formatted to provide a searchable list of individual staff members and listings of individual episode credits.

These supplemental “mini-guides” provide additional coverage of the other more specific topics covered in the main sections above. The supplemental guide provides a general overview of how typical episode credits are structured and how to interpret them. It will also present you with a list of common staff positions found throughout the Dragon Ball franchise and a brief look at their respective responsibilities. The additional supplemental information listed below examine original author Akira Toriyama’s contributions to the animated adaptations and a thorough look at the remastering process used to produce the first phase of Dragon Ball Kai.