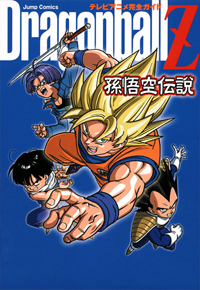 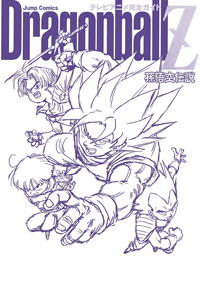 Although Dragon Ball Z was the franchise’s second animated TV series, its “TV Anime Guide” was actually the first of two anime companion guides released in the early 2000s, following shortly before the Dragon Ball companion guide. The guide’s cover illustration was designed and sketched by Akira Toriyama, but the final artwork itself was completed by Katsuyoshi Nakatsuru. When the dust cover is removed, Toriyama’s original rough sketch is visible on the front of the hardcover and Nakatsuru’s final version is visible on the back. The book has been printed in a “Western”-style, meaning unlike most traditional Japanese books it is read from left-to-right. It also comes with three exclusive sticker sets that can be removed from the back of the book.

Prologue
002
The guide’s prologue shows previous events from Dragon Ball, including the appearance of the seven mystical Dragon Balls, Goku and Bulma’s adventure to find them, Goku’s rivalries and battles, and his marriage to Chi-Chi.
1: Son Goku in Z
005
Highlights the various aspects of Son Goku as a character, from his growth from birth to age 47 (his age at the end of Dragon Ball Z), to his fighting techniques, personality, major fights, and his family and friends.
Son Goku’s Evolution
006
Son Goku’s Ability
014
Son Goku’s Personality
018
Son Goku’s Battle Scenes
020
Son Goku’s Families
036
Son Goku’s Friends
040
2: The Super Battles in Z — Collection 1
059
This section highlights the various fights in Dragon Ball Z, from Raditz up to Freeza. There are also two pages devoted to the Bardock TV special, and the will he passed down to his son.
Akira Toriyama × Katsuyoshi Nakatsuru (read translation)
090
The highlight of the book is a 12-page interview with Akira Toriyama and Katsuyoshi Nakatsuru as they discuss a variety of topics, such as the different techniques used in manga and animation (including the effect of the ongoing digital revolution), Toriyama’s thoughts on the then-recently confirmed live action movie, and how the “Z” in the anime came about. It also features the most in-depth account of how Bardock came to be, which involved contributions by both Nakatsuru and Toriyama, and fed back into the manga; Nakatsuru’s original design sketches for Bardock and his team are reproduced for the first time ever.
3: The Super Battles in Z — Collection 2
103
This section covers the fights in the anime from the Garlic Jr. arc to the end of the Cell arc. There are also two pages devoted to the Trunks TV special and the struggle against No. 17 and 18 in that future.
Akira Toriyama’s Anime Design Collection
134
A collection of character design sketches Akira Toriyama drew for the Dragon Ball Z anime staff, ranging from color guides for characters in the manga, to TV-original characters like Gregory, the Tsufruians, and Bardock, to a number of movie villains. Unlike Katsuyoshi Nakatsuru’s designs, these were previously published in daizenshuu volumes 5 and 6.
4: The Super Battles in Z — Collection 3
145
Covers the fights in the anime from the Afterlife Tournament up through the end of the series.
Enemy Biographies
172
Profiles of the major enemy characters that appear in Dragon Ball Z, from Raditz to Majin Boo.
Opening Film Explanation
188
Despite the header, this actually showcases the openings, endings, and eyecatches used during the series broadcast, explaining what happens in them, as well as what an “eyecatch” is.
5: The Secrets in Z
193
Part-glossary of animation-related terminology, and part collection of information such as anime-only costumes, movie titles, and the highest-rated episodes. Goku’s dōgi is revealed to be colored differently from the manga because cel paint in the appropriate shade was simply unavailable.
6: Characters in Z
205
An encyclopedia of the characters in the Dragon Ball Z anime.
Original Characters
206
A collection of line art spotlighting TV-original characters, along with short biographies.
Z Characters Name List
216
A (Japanese) alphabetical listing of all characters who appear, along with a brief description and the name of their voice actor.
7: The World’s Best Story Collection
225
A listing of all 291 episodes, along with TV specials and release dates of the theatrical films. Days the show did not air are included with an explanation, and the sidebar keeps track of important events in Japan and the world during the show’s run.
Epilogue
254
Credits for the main cast and staff involved in the production of the series.

It should be noted that although Akira Toriyama is listed as the author of this databook, he actually had very little involvement with the production of its content, if any at all. The contents of this databook were almost entirely compiled and organized by Kisōsha in cooperation with Shueisha and Toei Animation.