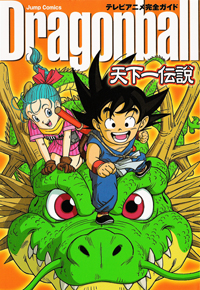 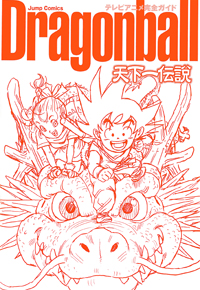 Although Dragon Ball was the franchise’s first animated TV series, its “TV Anime Guide” was actually the second of two anime companion guides released in the early 2000s, following shortly after the Dragon Ball Z companion guide. The guide’s cover illustration was designed and sketched by Akira Toriyama, but the final artwork itself was completed by Katsuyoshi Nakatsuru. When the dust cover is removed, Toriyama’s original rough sketch is visible on the front of the hardcover and Nakatsuru’s final version is visible on the back. The book has been printed in a “Western”-style, meaning unlike most traditional Japanese books it is read from left-to-right. It also comes with an exclusive “Dragon Ball Card Game” card that can be removed from the back of the book. An extra neat feature to the guide is that the outside edge of almost every page features a CG rendering of Karin Tower, and when the reader slowly flips through the book it gives the impression that they are moving up the tower.

It should be noted that although Akira Toriyama is listed as the author of this databook, he actually had very little involvement with the production of its content, if any at all. The contents of this databook were almost entirely compiled and organized by Kisōsha and Shueisha.

Non-Daizenshuu Volumes
Connect With Us
Support Us
Your support for Kanzenshuu is what keeps us going. You can help by donating to us directly, or by shopping online at certain retailers through our affiliate links below. Every bit counts and helps contribute to our server fees and bringing you new site content, reviews, and contest items.