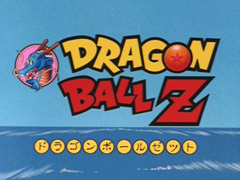 As the Dragon Ball TV series approached one of the manga’s major turning points, the animation staff approached Akira Toriyama about changing the name of the TV series to help change the “image” of the series. Thinking he would be ending the series sometime soon, Toriyama decided to signify this by simply adding the last letter in the alphabet to the series name. Little did he know that Dragon Ball Z would go on to be one of the most successful, popular, and recognized animated action series of all time.

Taking over the Dragon Ball time slot at 7:00PM every Wednesday on Fuji TV, the first episode of Dragon Ball Z aired on 26 April 1989. The main staff of the series remained relatively unchanged from its predecessor and they continued on right where they had left off the week before. The story picked up five years after the end of Dragon Ball, and would greater explore Goku’s mysterious background. With each villain stronger than the last, the series’ battles and popularity quickly escalated. The series’ TV ratings were amongst the best in Japan, with Dragon Ball Z remaining in the “Top 10” rated animated shows during its entire run.

In May 1995, Akira Toriyama announced he would be ending the manga series after 519 chapters, spelling the inevitable end for one of the most successfully popular action series of all time. After 291 episodes, 2 feature-length TV specials, and 13 theatrical films, the Dragon Ball Z TV series came to an concluded when the final episode aired on 31 January 1996. However, Toei Animation had no intention of letting the franchise die just yet and created an anime-only series of their very own — Dragon Ball GT.

Goku and Piccolo face-off against Goku’s older brother Raditz, but they soon find they must face their fiercest opponents yet: the Saiyans! They are a warrior race with a prince hell bent on using the Dragon Balls to gain eternal life. With Goku dead, the Z Warriors must train harder than ever to prepare for the Saiyans’ arrival on Earth.

Following the battle with the Saiyans on Earth, our heroes head to Piccolo’s home planet, Namek, in search of new Dragon Balls to revive their fallen comrades. Unfortunately, the most dreaded villain in the universe, Freeza, is also searching for the Dragon Balls. Our heroes must join forces with Vegeta, and take Freeza’s men head on.

Having defeated the Ginyu Special-Squad, our heroes must recompose themselves, but it’s too late… Freeza has arrived! The true battle on Namek unfolds, but our heroes are no match for the all-powerful Freeza. Goku’s anger swells as he watches his friends die right before his eyes, and he attains a Saiyan form not seen for a millennia.

The immortal Garlic Jr. has escaped from the Dead Zone and returned to take the thrown of God for himself. He soon kidnaps God and Mister Popo, and unleashes the black mist of terror, turning the whole world into Demon Clansmen. With Goku still gone after his battle with Freeza on Namek, it is up to Gohan to once again save the people of Earth.

Trunks returns from the future to warn the Z Warriors that the Red Ribbon Army has returned, in the form of artificial humans?! Dr. Gero has created the greatest killing machines known to man and their target is Son Goku!! Everyone trains in preparation for their arrival, but it proves to be in vain, for a much more terrifying enemy has appeared…

The artificial human Cell has appeared, and he will stop at nothing to achieve his perfect form. After absorbing No. 17 & 18, Cell holds a martial arts tournament to celebrate his new perfection. While preparing for the Cell Games, our heroes attain new levels of Super Saiyan once again, but in the end Goku must say goodbye to his friends.

After giving his life to save the Earth from Cell, Goku finds himself once again in the afterlife. But he soon learns of a grand tournament being held by the Dai Kaiō, and plans to participate. He manages to make it to the finals, and faces off against Paikuhan from the West Galaxy. After being pushed to the wall, Goku somehow manages to win.

Several years after the battle with Cell, a now 16 year-old Gohan enrolls in high school. To protect Satan City from evil, he takes on the persona of the Great Saiyaman. But after Goku announces he will be participating in the next Budōkai, our hero strive to train for the tournament. But an evil plot awaits our heroes…

The demon known as Boo was created five million years ago by the dark mage Bibbidi. Now his son, Bobbidi, has appeared and released Majin Boo again in hopes of conquering the Universe in his father’s name. With a little heavenly help and the power of fusion, Goku, Vegeta, and some unlikely heroes must take on this evil Boo to save the Universe.