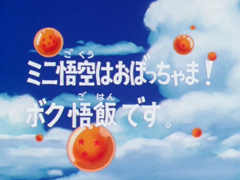 Five years have passed since the 23rd Tenka’ichi Budōkai. Goku and Chi-Chi have a son, Gohan, and they live on Mt. Paozu. But meanwhile, a spaceship lands far away, and from it an alien appears! As he searches for “Kakarotto” the man discovers Piccolo, who is giving off strong power. But even Piccolo, Goku’s equal, is petrified before this man’s tremendous power!! The alien then picks up another strong power, and heads off in that direction.

It is a beautiful day in the countryside. Adults are laboring and children are playing at a large farmhouse where pink ostrich-like creatures graze. Five years have passed since Son Goku defeated Piccolo at the 23rd Tenka’ichi Budōkai, and peace has reigned ever since. However, there is a new threat on the way to Earth in a space pod.

At Mount Paozu, Chi-Chi calls for Gohan, telling him that lunch is ready. Goku searches the forest for firewood; when he finds an appropriate tree, he fells it with a single punch. Chi-Chi is still calling for Gohan when Goku drops the tree in front of their house. She asks him where Gohan is, but he only complains that he is hungry. Frustrated, she asks him again if he has seen Gohan, and Goku says he has not. Chi-Chi wonders aloud where he could have gone, noting that if they do not eat and get going, Muten Rōshi will get impatient waiting for them. Goku offers to go find Gohan; Chi-Chi says he cannot have gone far. As Goku leaves, Chi-Chi wonders what she is going to do with Gohan.

Back at the farm, a farmer is forking hay into the bed of a Chevrolet pickup truck, thinking about how close he is to being finished, when a space pod crashes into the nearby farmland. The farmer is alarmed, wondering whether it is a meteor or a UFO, and he rushes to investigate in his truck. When he arrives at the crater, he exits the truck and approaches the crater with a shotgun in hand. Seeing that it is not a meteor, he wonders what it could be. Just then, Raditz emerges from the pod and floats out of the crater, coming to land in front of the farmer. Raditz realizes that the planet’s inhabitants are still alive, and curses Kakarrot. The farmer demands to know who he is, and Raditz touches a button on his scouter, reading the farmer’s battle power. Seeing that it is only 5, he dismisses the farmer as trash. The farmer warns Raditz not to come any closer or he will kill him; Raditz steps closer anyway, and the farmer shoots. Raditz catches the bullet in his hand and then flicks it back at the farmer, propelling him into his truck and to his death. Raditz scoffs at the weakness of Earthlings, and then notices a significant battle power on his scouter at a range of 4,880. He takes off, wondering if this could be Kakarrot.

Gohan is wandering through the forest, crying and calling for his father. He sits down by a tree trunk where a giant butterfly lands and then flies away. Gohan chases after the butterfly, asking it to wait for him, but it alights up a tree. Gohan resolves to jump to its location but he falls short, and the butterfly flies away. Gohan continues his search until he notices a rustling bush. He goes to investigate, and is scared when a large saber-toothed cat emerges from the bush. Gohan decides to play dead, hoping the cat will ignore him. The cat licks him and steals his hat, causing Gohan to cry because it was a gift from his father. Gohan chases after the cat in tears of anger, and the cat runs from him. When Gohan is about to catch up, the cat changes direction. Gohan doesn’t notice, plunging ahead through a group of bushes, where he finds himself over open air. As he falls, his eyes close in apparent sleep.

When Gohan awakes, he is hanging by his tail from a branch over a small ledge. He drops to the ledge, dusts off his clothes, and starts crying again. Goku searches the forest, calling for Gohan as he passes the tree stump where Gohan encountered the butterfly. Gohan continues to wander, crossing a small, rocky river and crying for his parents as he walks alongside it. He spots a colorful bird sitting on the end of a log that juts out over the water. Gohan is fascinated by the bird’s headdress, and he carefully walks out on the log, settling down when he reaches the bird. He compliments the bird, which it seems to acknowledge, and then Gohan introduces himself. The bird flies away, and as Gohan reaches for it, the log falls in the water. He tries desperately to hold on, calling for his parents as he floats down the river. Meanwhile, Goku spots Gohan’s hat passing by above the bushes. He sees the saber-toothed cat wearing it, and inquires after the hat, informing the cat that it belongs to his son, and asking how the cat acquired it. The cat tries to growl threateningly, which causes Goku to ask more forcefully. The cat is frightened and runs away, leaving the hat behind.

Gohan continues to float down the river, which is getting progressively wider and more perilous. He almost loses his log when it hits a rock, but he manages to grab hold of it again. Goku is searching the river on Kinto-Un, calling for Gohan. He finally spots Gohan hanging onto the log, and Gohan hears his voice. Goku tells him to wait; he is coming to save him. He tries to reach for Gohan, but Kinto-Un will not go low enough. At that moment, they approach a place where the river tunnels through a cliff. Goku flies above the cliff, intending to find Gohan on the other side, while Gohan cries for his parents in terror as the river carries him through the darkness of the tunnel. The river emerges from the cliff in a steep waterfall, and Goku does not make it in time to catch Gohan. He hears Gohan crying, and sets out to search for him at the bottom of the waterfall, but then he realizes that the voice is coming from a great distance above the waterfall. Gohan has somehow managed to jump up, grabbing hold of a branch emerging from the cliff. Goku flies up to him on Kinto-Un, and Gohan jumps into his lap. Goku looks down at the waterfall below, blinks in confusion, and asks Gohan what happened, but Gohan does not know. Goku returns the hat to Gohan’s head, and suggests they go home; Chi-Chi is worried about him, and the Turtle Hermit is waiting for them. Gohan happily agrees.

Raditz flies through the air in search of the great battle power. He passes over a city full of happy, thriving people, and he curses Kakarrot again. Piccolo is standing on a windy cliff when he senses a great power coming toward him. He fears that it might be Goku, but then Raditz arrives, seeming disappointed that it is not Kakarrot after all. Piccolo asks who he is and what he wants. Raditz says he has no business with the likes of Piccolo, and Piccolo asks why he has come, and whether he wants to die. Raditz laughs and mocks Piccolo’s optimism; he uses his scouter to read Piccolo’s battle power, which is 322. Raditz is impressed that this planet has people with such power, but he informs Piccolo that he is still no threat. Piccolo is offended, and asks Raditz whether he knows who he is talking to. Raditz says he does not, and Piccolo grows frustrated. He wonders how this man has such power, and attacks in desperation, but Raditz is unaffected, calling his technique worthless and asking if all it can do is kick up dust. Piccolo is speechless. Raditz offers to show what he can do; he raises a hand to charge an attack, but then another reading on his scouter diverts his attention. He flies up to try to get a location for the reading, and finds it at a range of 12,909. He notes that it is the largest power on this planet, and he is certain that this must be Kakarrot. He flies away, and Piccolo collapses to catch his breath, sweating and gasping for air. He laments Raditz’s ridiculous power; he was so terrified that he could not move.

As Raditz flies toward his target, he asks whether Kakarrot has lost the pride of the Saiyans, the mightiest warriors in the universe. There is imagery of baby Kakarrot being placed inside a space pod and then departing from a war-torn planet as the other Saiyans watch. Who are these Saiyans, and who is Kakarrot? Goku’s past will finally be explained!

Next Time:
“The Strongest Warrior in All of History is Goku’s Brother!”

The table below outlines all of the musical pieces used during this episode, and which (if any) CD releases contain said music. Most Dragon Ball Z background music collections compile multiple pieces of music into a single track, or suite; as such, individual pieces tend to not have their own unique titles, but rather exclusively have catalog numbers. The CD listings below indicate which disc (if applicable), which specific track, and which individual piece within that track’s suite of music is that scene’s corresponding background music.

The overall credits listed follow a straight forward structure; the staff involved with the production of the series as a whole are listed in the opening credits and the staff involved with this specific episode are listed in the ending credits. All credits listed below are presented as they originally appeared in the episode’s initial broadcast, although errors have been corrected to maintain accurate and consistent spellings throughout the site. For more information and a complete listing of the series’ staff, visit the Animation Production Guide.