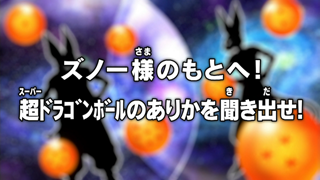 To Lord Zuno! Ask About the Location of the Super Dragon Balls!

As Jaco flies to Earth to meet up with Bulma, he receives a report from Galactic Patrol headquarters about a dine-and-dash. The suspect is a repeat offender called “Burp Man”, and an image of him pops up in Jaco’s ship. Jaco is not interested in this news though, and instead complains about how Bulma has called him on his precious day off. He angrily resolves to still enjoy himself on the way to Earth, and uses his ship’s weapons system to blow up some nearby asteroids, including a strange crystalline one. Shortly afterwards, he receives a direct call from headquarters, asking about the recent explosions in his area. It turns out Jaco has unwittingly destroyed a “Galactic Natural Monument”. Panicking, Jaco claims that Burp Man was responsible, and vows to pursue and capture him right away.

Finally arriving at Capsule Corporation on Earth, Jaco sits and mopes in the corner, upset over this unexpected turn of events. Bulma wonders if he is feeling remorseful for taking so long to show up, and Jaco blames her for the whole mess, but she has no idea what he is talking about. She asks him about taking her to the center of the universe, but he considers this request ridiculous. The galaxy is incredibly vast, and the universe as a whole contains an enormous number of galaxies, so there is no way he could go to the very center. Bulma thinks that someone at Galactic Patrol headquarters might know a way of getting there, but Jaco again protests, explaining that the Galactic Patrol’s area of operations is limited to the Milky Way Galaxy. Goku shows up, saying he was unable to locate Kaiōshin’s ki. It seems they cannot rely on the Galactic Patrol or Kaiōshin to help them out.

Jaco is annoyed at them for treating him as simply a means to an end, and is about to leave. Bulma tries to use sex appeal to get him to stay, but he says she’s too old for that to work, making her angry. However, Jaco suddenly thinks of something: on a planet not too far from Earth, there lives a strange person named “Zuno”, who supposedly knows everything… even the pattern of underwear worn by people he has never even met. Bulma thinks that this person must surely know about the Super Dragon Balls, and requests that Jaco take her to meet him. Outside, Bulma climbs into Jaco’s spaceship and they prepare to take off. Vegeta warns Jaco not to try anything “funny” with Bulma, and when Jaco responds with an expression indicating he finds the very idea absurd, Bulma gets angry at him once again. As the ship takes off, Goku and Vegeta discuss how they both have such strong-willed wives. Vegeta explains that this is due to their Saiyan blood; all Saiyan women were strong-willed like that.

Out in space, Jaco is shocked to learn about the Super Dragon Balls and the upcoming matches against Universe 6. He wants to come watch, and Bulma says it should be fine. He can even bring his girlfriend! Jaco suddenly gets very quiet… it turns out he has been dumped again. When Bulma finds this a little too amusing, Jaco retaliates by flying the ship super-fast, making them both sick. Jaco says Bulma has gotten older, making her angry yet again, but he explains he simply means that she has changed a lot from when he first met her. He flashes back to a time when kid Bulma flew his spaceship around, while he and Tights stood and watched from the sidelines. Thanks to Bulma’s genius intellect, she was able to fly the spaceship even at such a young age. Jaco says that with her guts and piloting skills, he thought she could have made a fine member of the Galactic Patrol. However, Bulma says while that might have been fun, she is satisfied enough just being Vegeta’s wife and Trunks’ mother.

The two finally arrive on Zuno’s planet, and approach his mansion. Zuno’s four attendants come out to greet them, but explain that Zuno is unfortunately booked solid and so he will not be able to meet with them for seven years. Bulma offers to pay them however much they want, but it is no use. Just then, someone with a reservation shows up: the criminal Burp Man! He has waited seven years, and now finally his appointment has arrived. Jaco recognizes him, and thinks that if he captures him then they can take his appointment with Zuno. Burp Man likewise recognizes the mark of the Galactic Patrol on Jaco’s chest, and considers running away, but he is reluctant to give up the appointment he waited seven years for. Jaco hesitates too, thinking that if Burp Man is arrested, the investigation may reveal he was not the one who destroyed the natural monument. Burp Man assumes Jaco does not recognize him as a wanted man, and hurries on.

Bulma tells Jaco it is alright; they will just have to pray Beerus was only joking when he said he would wish for the entire world to be destroyed. Hearing this finally spurs Jaco to action: he calls out for Burp Man to hold it. Burp Man panics, and holds one of the attendants at gunpoint. Jaco says holding someone hostage like that is a far more serious offense than a mere dine-and-dash, but Burp Man says dining and dashing is his life’s work. He was going to ask Zuno how to keep on doing it without ever getting caught, so he cannot let himself get captured before then. Jaco nonchalantly holds up his thumb, and says he is measuring the distance between himself and Burp Man. At this range, he can take Burp Man down before Burp Man even has the chance to pull the trigger. Burp Man does not believe this, but true to his word, Jaco quickly takes him down. In gratitude, the attendants let Jaco and Bulma see Zuno right away.

Inside, Zuno says that he will answer any question… but first they must give him “tribute”. Jaco kisses Zuno on the cheek, and is told that being a man, he only gets to ask one question. Jaco shows off Zuno’s knowledge by asking him about Bulma’s bust size. Zuno matter-of-factly states that it is currently 83.4 centimeters, though it used to be 87 centimeters before her breasts started to sag. Bulma’s annoyed, but kisses Zuno on the cheek and is told she gets to ask three questions, since while a woman she is middle-aged and not his type. Bulma accidentally wastes her first question by asking if a beautiful woman like her really only gets allowed two more questions than a man. Trying to be more careful, for her second question she asks Zuno to explain everything about the Super Dragon Balls.

Zuno launches into a long monotone speech, never pausing, and Bulma quickly whips out a notepad and starts jotting things down. According to Zuno, the Super Dragon Balls (also called “Wish Orbs”) were created in the 41st year of the Divine Calendar, by the Dragon God Zalama. They are perfect spheres, 37,196.2204 kilometers in diameter, light yellow with one to seven red stars inside. These stars have a special design that allows them to look like stars no matter which angle they are viewed from, and Zalama obtained a patent for this design in the 42nd year of the Divine Calendar. The two universes together contain a total of seven Super Dragon Balls, and when they are all assembled, one must use “the language of the gods” to ask the “dragon of the gods” to come forth and grant one’s wish. This must be worded in a specific, corny way. Once the wish is granted, the Super Dragon Balls will again scatter throughout the two universes.

Zuno thus concludes his speech. Jaco asks Bulma if she understood any of that, because frankly he did not. Bulma asks Zuno for clarification: Universe 6 and Universe 7 together contain a total of only seven Super Dragon Balls? Zuno confirms this is so, and with that, Bulma’s three questions are up. Bulma protests, since there is still much she wants to ask about, including whether they really have to say such a corny line to summon the dragon. But it is no use; Zuno’s attendants turn Bulma and Jaco away, and they dejectedly fly back to Earth, arguing the whole way. Back on Earth, the two fill in Goku, Vegeta, and Piccolo on how things went. Vegeta notes that if the Super Dragon Balls are spread throughout both universes, and Champa already has six, then that means he must have snuck into Universe 7 to gather them. Beerus will definitely be angry to hear about that.

Jaco tells Bulma he has “important matters” to attend to, and that he must be off. As a parting gift, Bulma gives him a cartload of milk and cheese. Grateful, Jaco says that Bulma might not be such a bad woman after all. Vegeta demands to know if Jaco did anything “funny” to Bulma, and Bulma teases him about his jealousy. As Jaco takes off, Goku says Jaco told him about how Bulma’s breasts are sagging, making her angry one final time. Out in space, Jaco thinks to himself that he should maybe have asked Zuno about how to make up for destroying the natural monument, since a written apology probably will not cut it…

Next Time:
“The Matches Begin! Everyone Head to the ‘Nameless Planet’!”

A Cooperative Production With