My gosh it has been a hell of a month for this game lately.

- Got somewhat lucky to pick up Vegetto Blue, but he was the only new unit that I got it from both banners and that's after completing the 7 steps for both in like two or three times, oh well

Spoiler:
- So they managed to give Android #13 more character depth than the original, but damn all that stalling for Shallot becoming a God was really annoying

- Don't know if I liked Nappa returning, also I know we should consider battle powers in this game, but for god's sake the likes of him, Bardock attempting to fight Buuhan just makes me wanna puke, if it was not silly enough for Majin Vegeta to resist Buuhan for so damn long.

- Also the dialogue was kinda stupid: 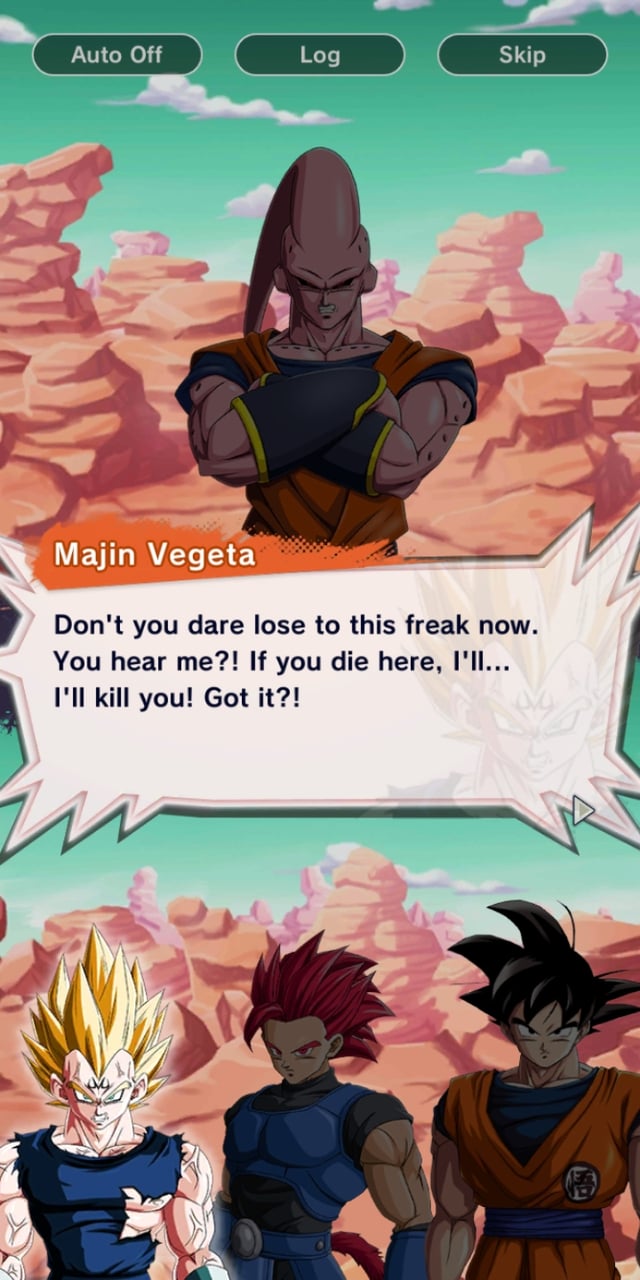 - A really good unit, can't believe I would find useful to use Shallot in the PVP again, seriously the last time was on this game first days
- Still don't know which special move could be the best for him in this form, I have Blaster Shell for faint and attribute downgrade

- I thought I couldn't complete the first one without the new units for boost chars, but I actually did it... I had some time spending on it, but Hit was the savior for me, god bless his nullify endurance abillity
- Omega Shenron Battle 51 was a pain in the ass, but thanks to Kefla I could do it in time. It's fun because it's challenging, but why not give us a better prize than another title to boost stats?
- Awakening Trunks was more fun when I got Vegetto Blue, so I could draw a lot of Z Power from the event, Co-Op was better than the last time with Kid Goku and I could get more tickets this time. Don't intent to have him at VII though.

- Well, this sums up for me:
Spoiler:

- Also so funny that I wanted undressed Paikuhan for FightersZ and we got in Legends instead:


Noah wrote: ↑
Sun May 24, 2020 10:44 pm
If we ever get Paikuhan I hope it is on his without his weight clothes as no fighting game have ever introduced him with that outfit.

Man, I saw Vegetto Blue so much in co-op (definitely on purpose and with some fake profiles, as I don't believe that many people have him, nobody from my friends does) that I don't even want him now... Butt! do you guys collect QR codes for Shenron, and how?
FighterZ: Funky_Strudel
PS4: Dynamixx88
Top

MCDaveG wrote: ↑
Wed Jul 01, 2020 4:09 am
Man, I saw Vegetto Blue so much in co-op (definitely on purpose and with some fake profiles, as I don't believe that many people have him, nobody from my friends does) that I don't even want him now... Butt! do you guys collect QR codes for Shenron, and how?

I tried getting QR codes for Shenron last time, and I couldn't get a single Dragon Ball. So this time, I'm not even bothering with that stuff.
Top
Post Reply