Agreed; this is something I've been wondering about since finishing the story mode (and getting the majority of the cards); I was still playing Ultimate Mission X (in a grinding/ 'just for fun' sense rather than actually doing anything, apart from clearing a few of the harder Arcade mode battles that I hadn't succeeded in before) up until just before World Mission came out, and a few months back managed to get all of the game's available cards (3376, unless I've missed a code somewhere); the fact that World Mission only offers 1177 (of which, in 100 hours, I've collected 1116- don't know if that's 'good' or 'bad', just illustrating it hasn't taken THAT much time to reach the limit of play-motivation in that respect) is, taken on its own as a comparison and disregarding all other factors, pretty unimpressive.

I appreciate it's Super DBH so focuses on that, but the absence of a good number of particular cards/ characters leaves me a little cold, despite the fact that I enjoyed World Mission for what it was, and the Switch's superior capabilities made for an all-round superior experience.
I'd hope that older sets might become available at some point, but I think it could just as likely not happen given the aforementioned Super DBH focus.

World mission has 110 more playable characters than UMX. Though there are many things I liked more about UMX, it for doesn’t have more characters. More cards yes, and really wish they would add the original card sets even if we didn’t get all the arcade missions for Pre SDBH and it wouldn’t be hard cause every effect and attack even from DBH is in game.
Top

S3 Hendrix wrote: ↑
Fri May 31, 2019 11:28 am
World mission has 110 more playable characters than UMX. Though there are many things I liked more about UMX, it for doesn’t have more characters. More cards yes, and really wish they would add the original card sets even if we didn’t get all the arcade missions for Pre SDBH and it wouldn’t be hard cause every effect and attack even from DBH is in game.

Oh, sure, with all the new Xeno stuff and Super characters etc I get that the total number of characters is now greater, but I mean specific things like Buu-saga yellow suit Yamcha, Abo and Kado, Bardock's team, and the Super 17/ 18 fusion. I know you can make your own of at least some of these, but that's a whole different kettle of fish in my mind (however cool the feature is). I guess I just liked the comprehensive range of versions of characters and the ability to make 'what if' teams and the like, which given the omission of certain versions isn't possible to the same extent, but I acknowledge this point wouldn't necessarily matter to a lot of people, and certainly isn't a deal-breaker for me personally, just a minor quibble. At the end of the day I can always just pick up my 3DS if I want, so it's not too bad- just would have been cool to have it all in one package (with the vastly superior graphics etc), so to speak.

I agree with you that it really shouldn't be much effort for them to add the older sets, and if we're lucky we may get at least some of them

I was originally a little deflated that the older sets weren’t available, but then when I finally competed all sets within the games I was quite relieved I didn’t have to do this with the older cards. If they could add them as paid DLC without having to pull for them, then great! But I’m happy enough that we can make them ourselves (for the most part) with the custom creation mode.
"I'm not a bad guy, I am a good guy, who just... hits women with his car."
Top

Can’t say to much, but manyyyy more characters are coming to world mission. Like a lot more
Top

new characters from the recent UVM sets??? there is not that many of them unless you mean new cards of the same characters like they always release each mission, hope not.
Top

new characters from the recent UVM sets??? there is not that many of them unless you mean new cards of the same characters like they always release each mission, hope not.

Well the scan has been leaked, we’ll be getting a bunch of new Goku and vegeta br cards like transformation ssj Goku BR who turns ssjB and transformation ssj Vegeta BR who goes SSJGod, Sealas, great saiyaman 3, Paragus BR, Beet BR, Goku CC SSJGod, Goku CC MUI(UVM5 sec), and a few others.(like Goku br and vegeta BR in their SAB jackets) but this is crazy cause they’re giving us cards from UVM8 which literally came out barely 2 months ago
Top

I´m still salty about not having Hirudegarn first form.

The following cards will be added soon: The leaks also mention UMP-05, UMP-26 and UMP-43, so I guess those might be coming too.
Top 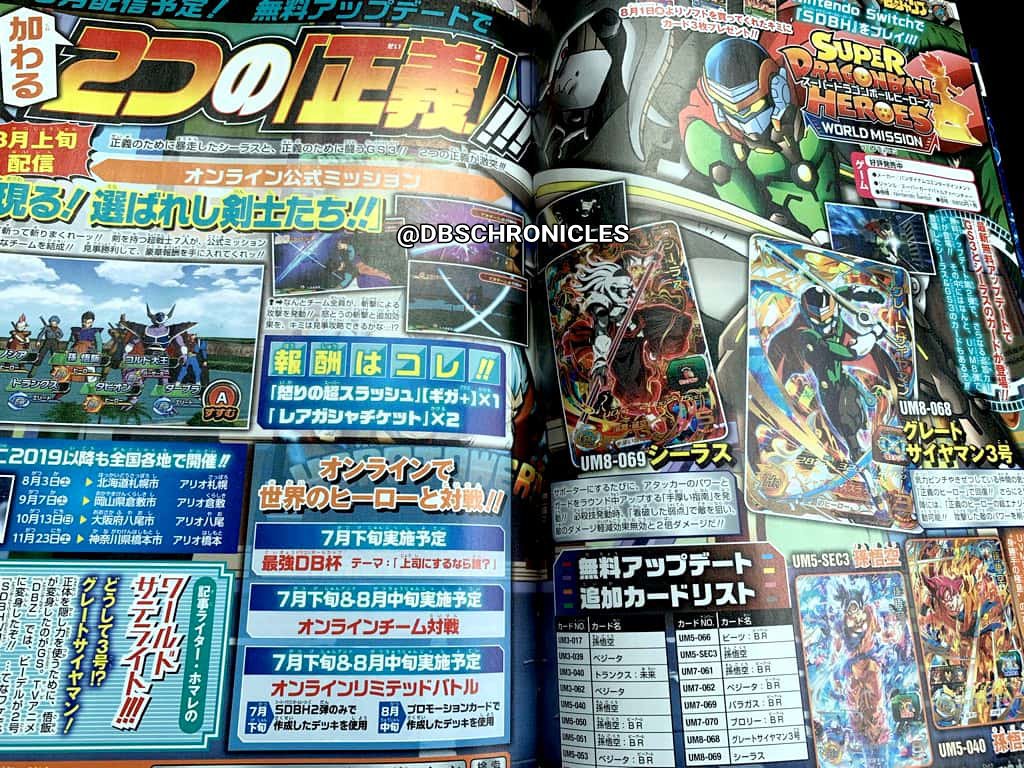 Does the DLC add new arcade missions?
I'm re-watching Dragon Ball GT in full on my blog. Check it out if you're interested in my thoughts on the series as I watch through it!
Top

My bad everyone I meant to say it drops 8/7/2019 idk where I got 8/3 from, also no it doesn’t add new Arcade missions but it does add new missions to the “added/extra mission” mode where you can play new missions which include the DLC characters.
Top

so the update is coming out today, Right?
Top

this is just pure speculation but, the first DLC pack for world mission was DBS broly and the second was power of the saiyans so it seems each DLC pack is themed to something so here’s what I believe the following DLC pack themes will be

DLC 4 Dark makai army (which will include characters such as the new demon god forms for Towa,dabura and mechikabura, also we’ll get dark Gogeta )

And the possible final pack DLC 5 which will include warriors from the universal conflict arc( such as hearts, Kamioren, lagss, grand priest Goku, And GoD Toppo)
Top

Did we get SS Vro;y in this pack? Or still just base?
Playing Xenovoerse on PS4
PSN Tag: Dualist721
Top

Base. I didnt see no ssj broly, FPssj broly, or any gogeta either.
Top

It's really stupid World Mission doesn't have Gogeta Blue or SSFP Broly. Two units I really want to use on my team. I wonder what they're thinking. We should also be getting more current story cards from SDBH.
Top 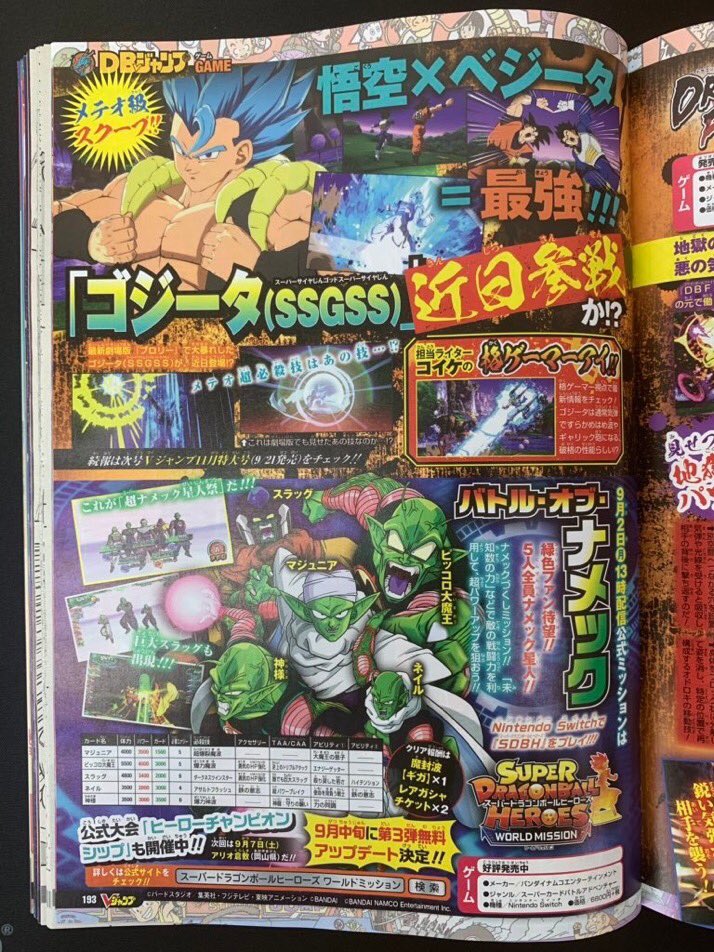 Meh. They're going with the more boring choices possible in the available pool of missing cards with these updates.
Top
Post Reply