1) The cards that you collect in this game look like actual Japanese cards of some sort that are probably nostalgic for Japanese fans to see again if I had to guess. My fiance noticed on the side of them they almost look like they're meant to be scanned by something when you slide them, like credit cards do. These wouldn't be basically the old Cardass cards I've heard people talk about before would they?

2) When you get Goten and Kid Trunks as support characters later on, do they have access to Super Saiyan via their skill trees? Or do we only get them in base forms?
My Writing Endeavors - Twitter
"There are two kinds of folks who sit around thinking about how to kill people. Psychopaths, and mystery writers. I'm the kind that pays better." - Richard Castle, 'Castle'

Gyt Kaliba wrote: ↑
Thu Jan 30, 2020 9:55 am
When you get Goten and Kid Trunks as support characters later on, do they have access to Super Saiyan via their skill trees? Or do we only get them in base forms?

They have Ssj.
Top

Nice, I was hoping they would, thanks for the confirmation.
My Writing Endeavors - Twitter
"There are two kinds of folks who sit around thinking about how to kill people. Psychopaths, and mystery writers. I'm the kind that pays better." - Richard Castle, 'Castle'

Why did they include the driving test for Goku and Piccolo but not the Garlic Jr saga?
Top

Let me tell ya'll a funny story. So i'm just sitting here leveling up Gohan and it's dead quite in my house and i'm laying down with the controller right up next to me and all of a sudden King Kai's voice comes through the controller speaker HOWS THAT SOUND!? scared.....Me too death. LOL

The Dragonboxes are like a middle aged woman who still looks good through simply taking good care of her skin and body with maybe a tiny bit of makeup while the Orange Bricks are like a middle aged woman who get's 50 tons of botox, makeup and plastic surgery in order to look younger and as a result looks even worse. ~ ringworm128
Still recording Toonami broadcasts on VHS after all these years!
#1 Paikuhan fan!
Top

The driving test was quick filler that doesn't contradict or stretch previous story elements that some fans actually like. The Garlic Jr. Arc is filler that contradicts the internal continuity of the series by including a movie villain from a movie that contradicts several story elements from the series that pretty much no one actually likes & its only contribution to future stuff is getting referenced in GT for the water that cures everyone which...firmly establishes that GT can only take place in the Z anime's continuity, but whatever. On top of that, it would take up time & assets that were better spent on the actual canon events of the anime & manga.
Only dubs that matter are DB, Kai, & Super. Nothing else.
Vic Mignogna: Good actor & singer, but a MAJOR douchebag & idiot.
https://www.youtube.com/user/Scsigs
https://twitter.com/Scsigs

Spoiler:
The epic tale of how Sean Schemmel blocked me on Twitter:
I tagged him in a thread explaining how his performance wasn't rerecorded when FUNi were redoing parts of the early Z dub for the Orange Bricks.
He thought I was misrepresenting his work by saying he wasn't in something he was in.
I explained how that wasn't the situation & did a bit of a sarcastic kinda thing involving the rerecordings FUNi did for the Z dub to show how stupid that was.
He said they didn't record him & not use his recordings.
Blocked & he deleted his response tweets to me.
???
Profit...?
Top

not to mention the driving episode is one of, if not the most popular and well remembered pure filler episode in the series, where as the garlic jr saga,,,,well some people remember it exists.
nonbinary, they/them

Woo I did it , I beat buu saga then beat the hidden boss fight , pretty awesome imo.

Only negative choice imo is bandai blocked sharing images to social media but I don't know if they know they did. What I mean is I tweeted photos and bandai UK liked it. However I didn't use the PS4 built in share to upload to twitter no. Instead I had to do these steps :

Only way to upload those pics:
1 Send to a friend on PlayStation (I used my USA account so no one is bothered)
2 Open PlayStation app on phone
3 View messages
4 Save each screen shot on phone
5 Manually upload to twitter with #ps4share added in message 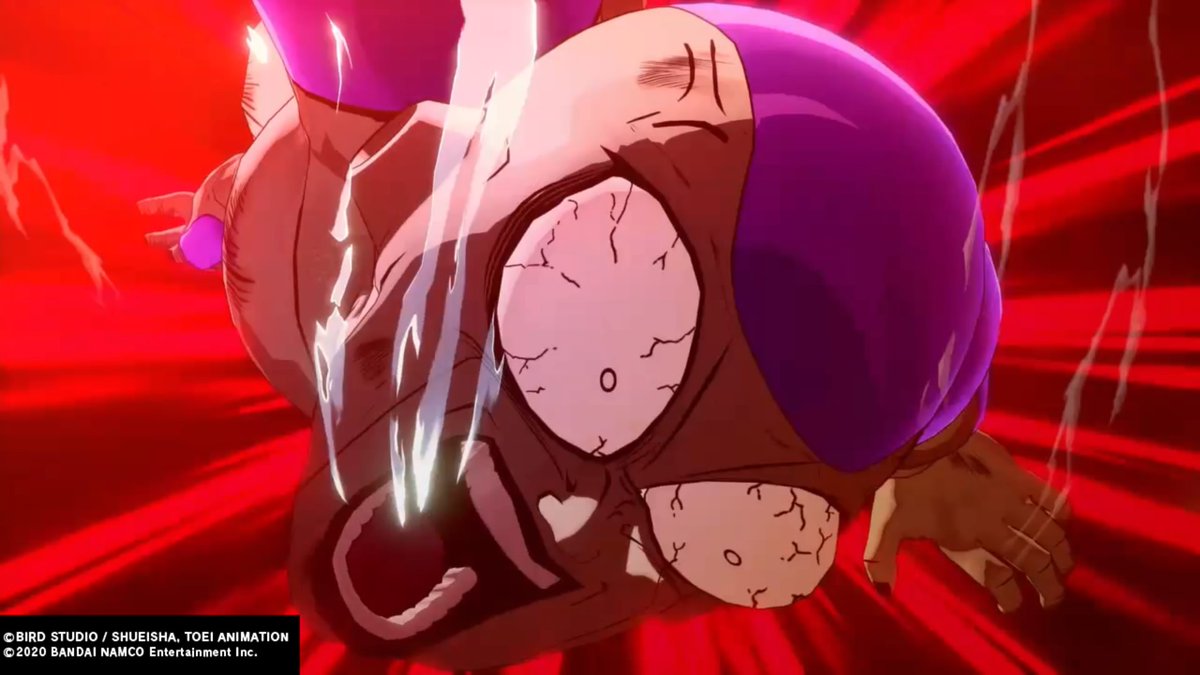 It's too much work for a basic feature. It's baffling too as the Mira stuff is all blocked scene so can't record video. I get that that's fair. However why have everything else unblocked if we can't do anything with video or pictures ? lol

- Totally agree about Garlic Jr being a pain in the ass in many aspects, and the driver license filler a fun chance to introduce a mini-game, that could've been done much better.

- Someone said earlier that you couldn't play as Cell arc Gohan, which is wrong, after Cell you get to play as him for as long as you like, until the 7 year hiatus of course. After he grows up, expecting to play again as his younger self is just not serious.

- I revived the Cell Jr, but couldn't fight them before the 7 year hiatus, do I have to wait for the main story to end to challenge them?

- Having a great time as the Golden Warrior/Gureto Saiyaman and assisting to OS High School. I wish we could choose to use Kinton. Also, the way Videl finds out about Gohan makes much more sense than in the show.

- I loved Vegeta regaining his fighting spirit by meeting Gohan again, they made it look as if he is projecting Goku onto Gohan. Too bad they had a dialogue about Trunks being hyped about going to the amusement park, that could've been told as if Trunks already hit Vegeta and earned his trip. This is the kind of lore expansion I want from a videogame, not the real origins of the saiyans or heavy stuff like that.

- I'm wondering if the battle power would've changed drastically if my leveling up would've been better. Like if Cell arc Gohan was level 80 (I had him around 50-ish), would his 7.9M BP be higher? like 20M?
Top

Are you playing as right person for cell Jr? Vegeta I believe.
Top

No, as Gohan. I had no idea only certain characters can fight certain enemies, thanks.
Top

Yes, loading screens on consoles are a pain. But tomorrow they will release an update to shorten load times and make other adjustments (the official account of the game said it would give more details tomorrow, but I think it’s not the Time Machine update yet)

By the way, there are side missions that you can only start with if you are using the right character or if you have the required character in your party for example

Thanks, I just got the update too, let's hope it's good


Minor stupid complain: I would've liked to have the second opening as well.
Top

Can you miss out on getting the recipes? I've been trying to get the Special Ramen Course and the Deluxe Seafood Course to show up (they're both around West City), and they refuse to show up for me. Apparently you can start getting those two after Chapter 2 from what I was reading, but I checked back then and they weren't there, and I'm just about to start the Androids arc. Am I basically screwed on that front until the Time Machine function is added?
My Writing Endeavors - Twitter
"There are two kinds of folks who sit around thinking about how to kill people. Psychopaths, and mystery writers. I'm the kind that pays better." - Richard Castle, 'Castle'

I started playing last Saturday and I'm really enjoying it. The new story bits , the music and the bosses are great (I got my ass kicked once by Raditz and three times by Dodoria)

Although... I haven't progressed the story that much (I'm currently at the Ginyu Forces arc) because I don't have too much time to play.
[Enter a cool signature here]
Top

Kid Buu fight is bullshit just like how it was in Budokai 2. Annoying but nostalgic in a way
Top

1) The cards that you collect in this game look like actual Japanese cards of some sort that are probably nostalgic for Japanese fans to see again if I had to guess. My fiance noticed on the side of them they almost look like they're meant to be scanned by something when you slide them, like credit cards do. These wouldn't be basically the old Cardass cards I've heard people talk about before would they?

I have no clue where they’re from, but I found a bunch of them in my drawer the other day. From the ones I have, haven’t found any of the Kakarot equivalent but I’m missing over half. Either way it was kinda surreal
Top

lol, that actually kinda makes me hyped for that fight, i had so much fun with that budokai 2 fight when i played that game again a couple months ago. just such a asshole fight, took turns fighting him with my friend, fun times.
nonbinary, they/them

Garlic Jr might be getting DLC, although it's unknown if it will be his arc or movie.

I think #18 was worse with Burter and Jeice being a close second.
Top
Post Reply