This can be a Hyper Dimension general discussion, but I really wanted to know whether there's any interviews or any worthwhile reading regarding this game. I was thinking about Dragon Ball games from around the time, and Hyper Dimension stands out as a really, really special game, which the developers clearly poured a lot of love into. They're the same developers as the Butouden games, but Is there any reason this Dragon Ball game looks so good? Like, one of the best looking SNES games ever good? Is there any reason it has a really unique atmosphere? Most games then (and even now) seemed to really try to hype up the franchise, but this game seems to understand that you love Dragon Ball and isn't trying to waste your time.
This game seemed to stick with Dragon Ball fans for years as the best Dragon Ball game and I'm not convinced that it's due to it being technically the best game, but more so that it just seems to... love Dragon Ball. I'd love to read more about the game from the developers, if such reading material exists!
Top

The only thing I can infer is that, as a last-gen title (Ultimate Battle 22 was already out on PS1), they really wanted to push the SNES hardware to its limit and wow players with something beautiful and unique, since UB22 was already kind of a Butoden sequel. Just my wild but speculative guess.

Couldn't really find anything on its development though.
Top

I don't remember having ever seen any info about the development back then in magazines (I'm from France, where the game was released soon after the Japanese version).

The only infered info that I can offer is that Goku's portrait was changed late during development: he looked pretty serious in the original portrait, which you can still see on both the Japanese and the French instruction booklets. The Japanese instruction booklet was likely already done and impossible to edit when they decided to make him smile instead, and the French staff just took and edited the Japanese booklet without noticing (or caring) that the portrait had been changed in the game. 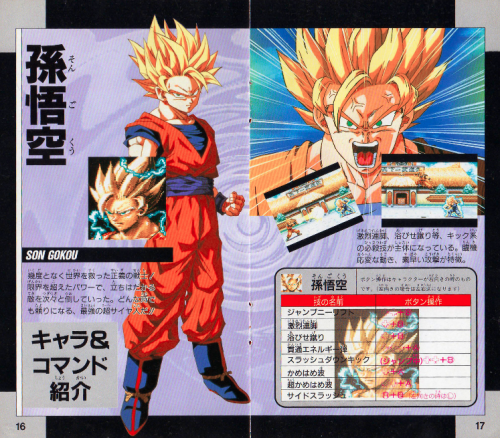 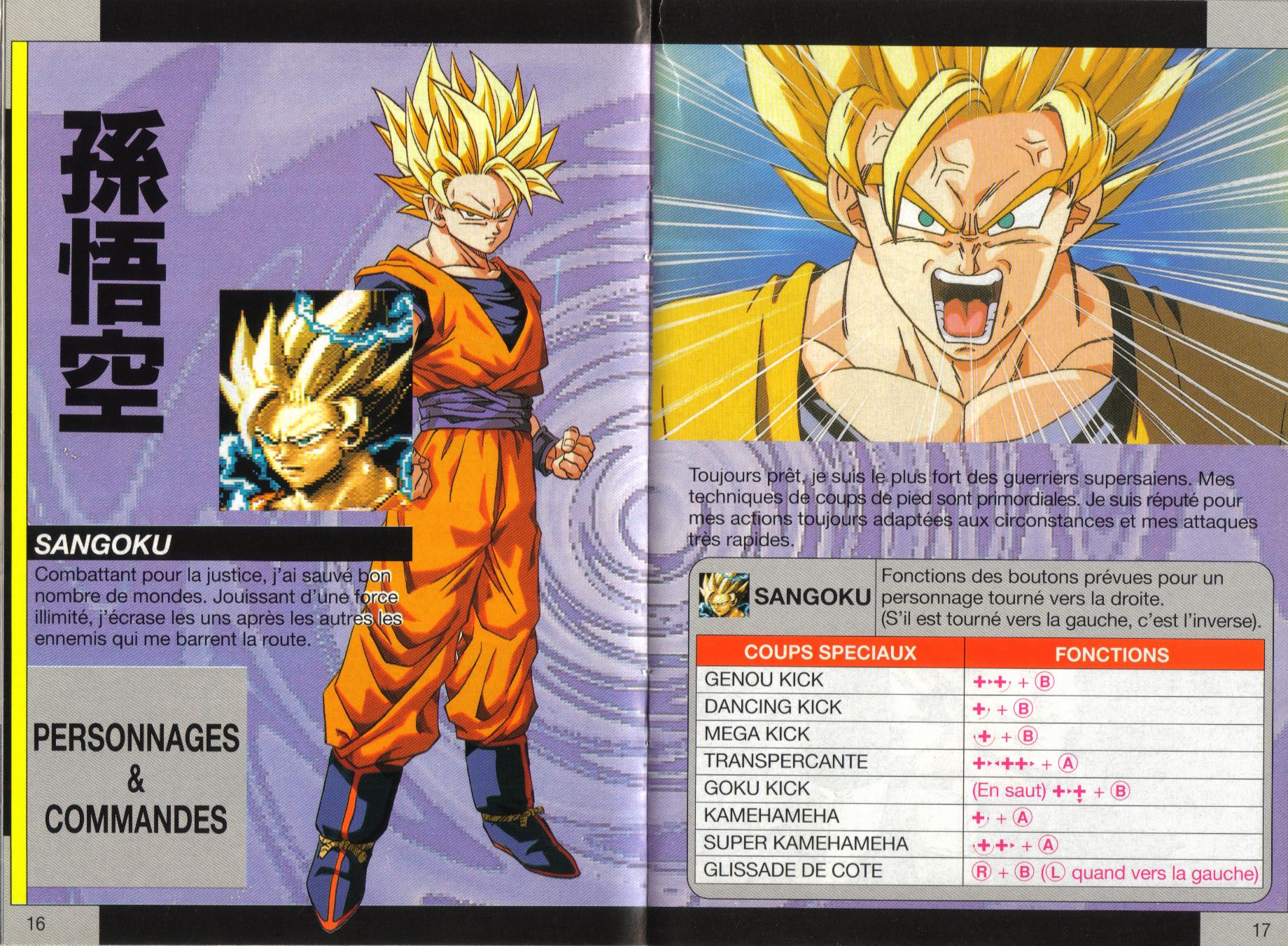 Through my short-lived exploration of the broken Debug Mode, I could also see that the developers had built a few specific systems for their development, pretty classic ones:

- A way to instantly start any battle in any stage with any fighters with both fighters locked at 999 health units (which I think is impossible in the game itself).

- A way to visualize the various stages instantly, without trigerring any battle or event, just a picture to scroll through and check how the stage looked currently.

- A way to access various specific points of the game immediately: the opening, the title screen, the beginning of the story mode, the final credits, the secret battles, etc...

Finally, despite my exploration being minimal due to most of the Debug menu being extremely broken, I didn't find any trace of unused elements, on the contrary of previous games, which could imply that this game was more carefully and strategically crafted than previous games with no element left behind because of time constraints and no time wasted to create things that would not be used. It's like nothing was created with a thought that "maybe it will be in, maybe it will remain unfinished". All elements are either complete or not even remotely started, or so it seems.

Finally, this is exclusive to the development of the French version, but because it would have taken either too much time or too many efforts for the translators, the access to the Story mode was erased from the French version. The developers simply took out the option from the main menu, erasing the letters and modifying the cursor's programmed behavior so that it never goes to "option 0" (originally the option for the story mode) and only goes from options 1 to 4. They also severed the link between option 0 and the story mode, so hacking the cursor onto it and clicking just leads to a black screen.

The placement of the story mode event was not changed in the data, so you can go there in the Japanese version and transfer that specific moment to the French version to initiate the story mode. But with the numerous Japanese letters having been erased or replaced by western letters and the translators not having reorganized it at all, it is complete gibberish.
Development is sometimes as easy as making letters disappear from a menu and blocking the cursor on all other options.

Saving costs and efforts on the translations was not uncommon back then: Street Fighter 2 lost a lot of biography info, all of the gameplay hints and 90% of its possible win quotes compared to the Japanese version so that it would be easier and faster to translate.
Top

Sorry to bump an old thread, but this popped into my twitter feed today.

So the EX posted a picture of this booklet from V-Jump that featured "Dragon Suzuki" promoting Hyper Dimension:
https://twitter.com/VegettoEX/status/12 ... 6823306247

Was this intended as some sort of focus test event or something?

Also, I'm reminded of a conversation between Pekindaq and Kei17 about a promotional VHS that was intended for the game that was apparently never released: