I see it popping up a lot due to "Battle of Gods" promotional material: the phrase "Mystic Gohan". I'm pretty well-versed in its general history and have been thinking of adding it to the "Rumor Guide" on the site (mostly just confirming that it's never used in Japanese merchandise and such).

One place where it WAS "officially" used was an American figure line: 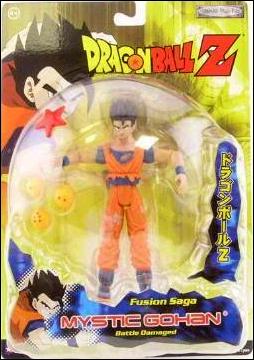 Does anyone actually own that figure? I'd like a nicer picture of it, and perhaps information about the series/line and its release timeframe. That stuff I'm pretty in the dark about. The page I pulled that image from (combined with a little digging through archives on dragonballtoys.com) puts it at around a January 2003 release, it seems.

Don't some of the newer video games use ‘Mystic Gohan’ too?
Top

Certainly not the Japanese ones (though I doubt that's what you're referring to). I was going to spot-check all of the American games to find out, though, yeah.

Is the figure "battle-damage" or is it just the low quality? I have one that looks similar, but I no longer have the box.
Top

Puto wrote:Don't some of the newer video games use ‘Mystic Gohan’ too?

No, it's Ultimate Gohan in Budokai Tenkaichi/Raging Blast/Ultimate Blast series, and Elder Kai's Unlock Ability in the Budokai series.
Top

Okay, for starters, here is a better image of that figure from off the web, though I never kept my boxes so I couldn't personally help anyway.

Second, there were multiple versions of this Jakks Pacific Gohan released with the "Mystic" term, but none in 2003. When that Gohan was initially released in his dad's dogi with a new sculpt, he was misidentified as "SS Gohan". It wasn't until early 2004 when the battle damaged version came, using the Genki Dama Goku body, and was actually labeled "Mystic Gohan". Subsequent releases of both the normal and damaged version have used this label in both single releases and 2-packs. Later repacks of figures originally released in Japan first, the Ultimate Figure Series, were given a domestic release and did in fact use Ultimate on their packing though...

Um...third, here is a site that has a shitton of card scans: http://www.dbzcollection.fr/v2/cartes.php I haven't looked through the American releases, but they do have a section for the TCG if you scroll down. I imagine you'll probably find at least one or two, even if they don't have them all.

Oh, and yeah, the figure in the image is "battle damaged", though incorrectly. It uses a Goku body, one from when he was supposed to be firing his final Genki Dama against Buu, but they've always had the orange on the figure. There is an undamaged version that was released a couple series beforehand.
Top

Here are a few various images. Use whichever ones you like.

Shit, how'd that last one get in there? Guess I just can't help myself. ;p

A quick search on ebay brought up a few other figures:

Hey, I know you're looking for merchandise that classifies Gohan as "Mystic", but while I was ripping images from the "season" set booklets last night, I came across Gohan's bio in which they do call him "Mystic".