He DID beat Jiren. Stop lying.
Every new thought that you have, NEGATES your previous thought!

This is the answer to existence.

Are you able to see it?
Top

Yup. He just didn't knock Jiren out of the ring. That's it.
Top

That’s only in the manga version. In the true version, he beat Jiren with the assistance of Krillin encouraging him to get up and continue the fight.
Top

And heaven forbid the main character lose. It’s almost like the teamwork aspect of the tournament was a huge part of it in the manga. It’s almost like Goku not being able to overpower Jiren was a plot point. It’s almost like the manga is internally consistent instead of going for visual bombast over anything else.
My not-review of DBS: Broly
The Creatives who inspire me: Akira Toriyama, George Lucas, Chris Nolan, J. R. R. Tolkien and Zack Snyder

You saw Batman v Superman? Is it the Ultimate Edition? No? Then you haven't seen Batman v Superman. Also, the Snyder Cut is the greatest, non-deconstructionist ensemble comic book film ever made.
Top

Are you making holy stew? You're certainly stirring the hell out of the pot.
One-liners aside, you went into the manga thread and replied to a post that specifically said "Manga Goku." I'm sure you aren't, but don't be surprised if nobody here takes your out-of-nowhere anime-centric reply seriously.
Last edited by Alruneia on Wed Sep 11, 2019 6:54 pm, edited 1 time in total.
Probably Kanzenshuu's biggest Bulla fangirl. Current avatar: DBU Bulla

Rebel_Yeh wrote: ↑
Wed Sep 11, 2019 5:33 pm
In the true version, he beat Jiren with the assistance of Krillin encouraging him to get up and continue the fight.

You're fighting a losing battle here. Nobody not even the DB companies themselves believe in that perspective anymore.
Super Dragon Ball Heroes Universe Mission translation compilation here. All translations are done and owned by me.

When did he beat Jiren?
he never beat him he lost to him Numerous times in the manga
If you're talking about the anime's portrayal then state otherwise
Top

Anime Goku never beat Jiren, despite Kuririn being made a mouthpiece for the writers to insist otherwise.

He fought Jiren in UI, had him on the ropes... and dropped out of UI before he could finish him off. Jiren was still capable of fighting, and went on to fight Goku, 17 and Freeza after that.

He didn't lose by tournament rules, or by any reasonable definition. He thought himself lost, but the fight resumed once it was clear that he wasn't beaten.

Kuririn's insistence that Goku had won was just a blatant attempt to make out that all the hype the anime and promotional material invested into UI paid off. It was pretty obvious that UI Goku was going to fail (and thus the hype bubble to burst) especially when the anime already did the exact same thing with UI Omen Goku Vs Jiren.
I'm re-watching Dragon Ball GT in full on my blog. Check it out if you're interested in my thoughts on the series as I watch through it!
Top

Saying Goku won that fight is kind of like saying that he beat Vegeta in the Saiyan arc because he managed to smack Veggie around with KK x3 for a while. Please ignore the part where Goku destroyed his own body in a failed attempt to incapacitate his opponent and ended up at said opponent's mercy. Also ignore the part where Goku was literal seconds away from death and had to be saved by two outside actors.

Actually, if you call the fight ever time Goku has to be saved by a teammate from getting ringed-out, Goku lost to Jiren four times in the manga (and I think as many times in the anime?).

dbgtFO wrote: Please elaborate as I do not know what you mean by "pushing Vegeta's destruction"

He's probably referring to the Bardock special. Zarbon was the one who first recommended destroying Planet Vegeta because the saiyans were rapidly growing in strength.

It was actually Beerus disguised as Zarbon #StayWoke

Herms wrote:The fact that the ridiculous power inflation is presented so earnestly makes me just roll my eyes and snicker. Like with Freeza, where he starts off over 10 times stronger than all his henchmen except Ginyu (because...well, just because), then we find out he can transform and get even more powerful, and then he reveals he can transform two more times, before finally coming out with the fact that he hasn't even been using anywhere near 50% of his power. Oh, and he can survive in the vacuum of space. All this stuff is just presented as the way Freeza is, without even an attempt at rationalizing it, yet the tone dictates we're supposed to take all this silly grasping at straws as thrilling danger. So I guess I don't really take the power inflation in the Boo arc seriously, but I don't take the power inflation in earlier arcs seriously either, so there's no net loss of seriousness. I think a silly story presented as serious is harder to accept than a silly story presented as silly. 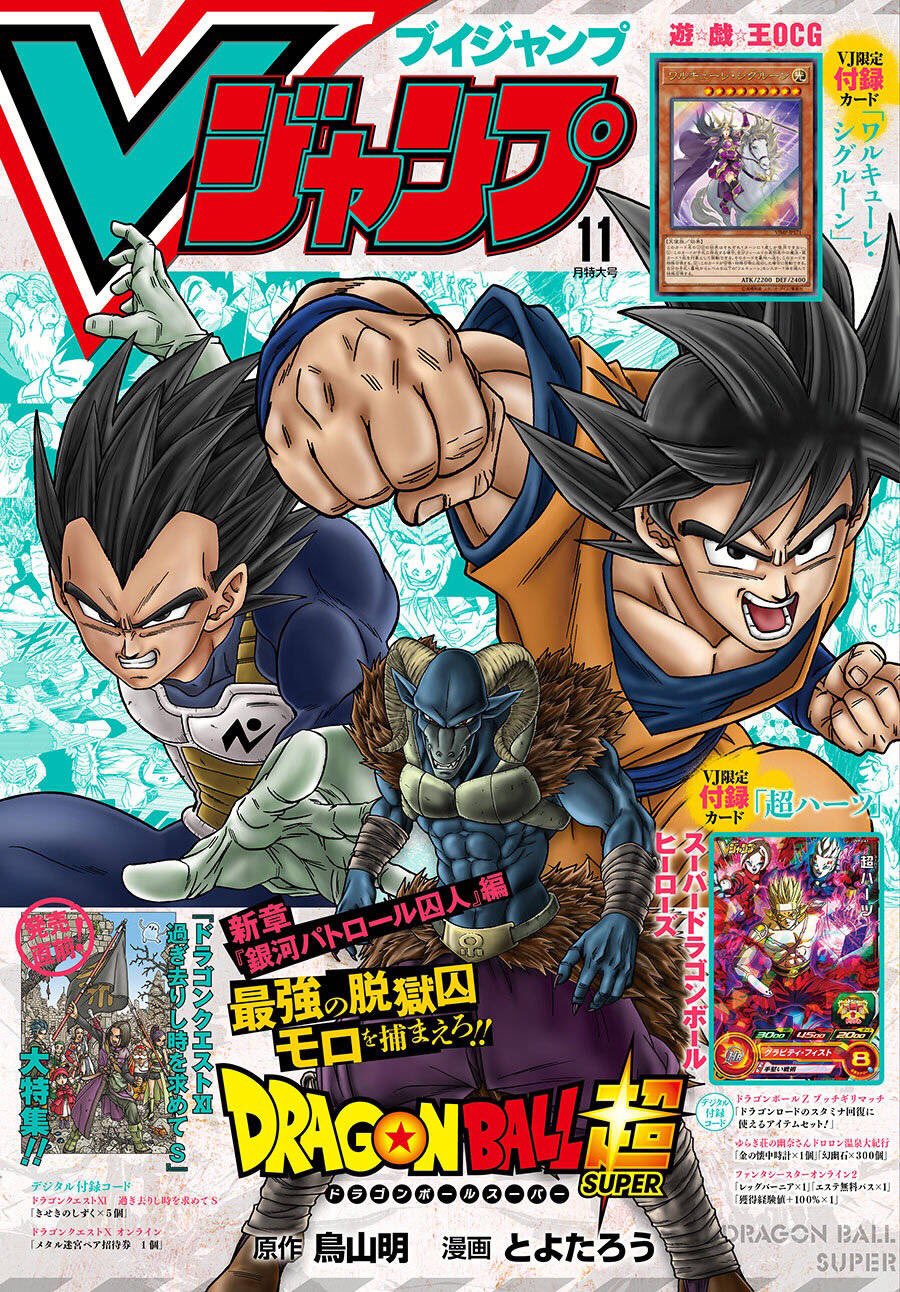 Moro looks amazing! The wild colors completely make up for his lack of beard.
Top

Am I the crazy one or is there something really uncanny valley about Vegeta's left arm there
My not-review of DBS: Broly
The Creatives who inspire me: Akira Toriyama, George Lucas, Chris Nolan, J. R. R. Tolkien and Zack Snyder

You saw Batman v Superman? Is it the Ultimate Edition? No? Then you haven't seen Batman v Superman. Also, the Snyder Cut is the greatest, non-deconstructionist ensemble comic book film ever made.
Top

Nope not just you, it looks pretty bad.
Top

Quasimodo! Yeah, he looks bad.
"If it means having to live under your control, I'd rather be dead!" - Trunks
English is not my first language, so if I made mistake, please, feel free to correct me. It will help, thanks.
Top

Hahaha ha I was gonna say that

At least Moro is ready to bite someone!
Top

I like the cover quite a bit overall despite the issues.

I've heard people complain about the color scheme. I remember reading an interview where Toriyama complained about the bright colors of the anime while saying he'd prefer a more subdued color scheme. I don't remember the interview, so don't quote me on that. I think that's what Toyotaro was going for. How successful he was is up to you.

Regardless, Moro's pallet and shading totally clashes with the rest of the cover. He looks much better on his own:
Spoiler: 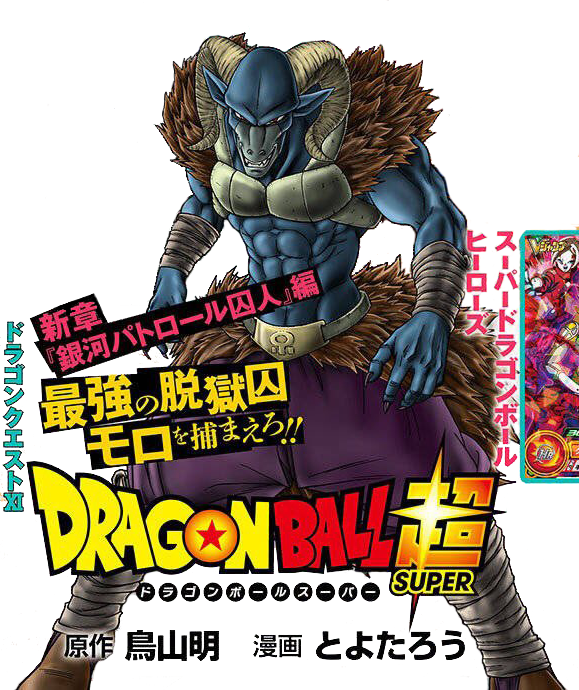 Re: purple pants~
I was just thinking the other day that just about every major villain from Super (aside from Jiren) has purple or bright green in their color scheme. I guess Moro does too.

As for Vegeta's arm...I think there's a chance it's a Photoshop issue to fit everything on the cover. It's likely that Toyotaro uses layers to draw multiple perspectives, so they might've just shifted the arm up to fit in the Dragon Quest bit. The shoulder might still be a bit large, though...
Top

so what are our expectations for this chapter?

I dig the cover. Vegeta's left shoulder is literally fine, yes Toyotarou does sometime draw human anatomy in an odd manner but people are overreacting this time.
Super Dragon Ball Heroes Universe Mission translation compilation here. All translations are done and owned by me.