Femme Fatale Kikaza wrote: ↑
Mon Sep 21, 2020 9:32 pm
I just hope that when Moro is ultimately defeated for good that letting him go free is not considered an option. Because here's what would happen if Moro lived by the end of the arc.

Moro : Is allowed to live.

Proceeds to break out all his henchmen, power them up to the point the Z fighters can't stop them, draining planets that escaped his radar, drain Earth, kill everyone and look for ways to get to other universes, meaning they failed and that everyone basically screwed up.

Were going to be with Moro at least 2x chapters, especially after what was said in the last panels,.

Honestly, Moro is seriously the most worthless main villain in Dragon Ball history.

Beerus and Whis don't seem to care for him at all, They have been standing right next to Moro the past two chapters and Moro does not even know who they are, Jaco knew who Beerus was and Moro does not not despite being around in U7 for 1 million years.

Moro does not even know of Freeza despite being out of prison for two months, Kaioshin and Od Kai don't seem to care for him at all.
Last edited by DevilKing99 on Thu Sep 24, 2020 7:55 pm, edited 1 time in total.
Top

Xeno Goku Black wrote: ↑
Tue Sep 22, 2020 5:20 pm
This Moro guy is gonna die without them ever really bothering to explain what is actual motivation is.

The guy showed up, was all "I wanna eat" and there's been fighting ever since.

I know Dragon Ball villains have never had the best motivations or development but the character has been written with nothing really going for him. This is what separates him from Zamasu because at least you knew what he was fighting for and why it mattered that he is defeated.

The only thing we know of Moro's character is that he is evil, that's pretty much all there is to him.
Top

Can't wait to see how this ends - I also feel like I'm reading a different series than some of you - it's a manga, not Hamlet

Oh, it's most people actually love this arc from what I have seen, my group is the vocal minority here actually, don't let me or anybody else discourage from loving it, I'm just a lore nerd so I'm kind of disappointed that I didn't get more of that.
Top

Hamlet doesn't have strenght levels to debate.
I learned english listening to songs. So I don't know anything about. The day you had to learn play piano by just listening .mp3, you'll understand.
Top

Whether Moro lives, dies, stays on Earth, teams up with Frieza and Broly, goes off planet to live in solitude, it doesn't matter.

Everything is alright by the End of Z.
Top

Everything is alright by the End of Z.

This is the biggest issue with keeping everything within the 10 year gap. You can get away with it once or twice, but not for as long as they have. The problem is that there's 0 Moro can do that will truly surprise us, because we know everything will be OK thanks to EOZ.
Top

I'm in the camp of EoZ getting retconned, at least to some extent anyways. Toriyama seemingly had a clear vision on how to conclude the series back in 1995 and that it would stand the test of time. However, given that he has since tweaked a few details in the 10 year gap as well as having an imaginative protege taking the reins a bit, I wouldn't be surprised if EoZ might be somewhat of a red herring. The events of the last few chapters could be an imagining of Goku's in how things will go down with meeting Boo's reincarnation or simply how Goku might perceive it. Other things could be going down at the same time and Goku would be so single-minded about meeting Oob that he simply wouldn't notice anything else.
It would be an ambitious departure from the well known ending to Toriyama's story but is that a terrible thing if it means more DB?
"Why is a raven like a writing desk?" - The Mad Hatter

Maybe Beerus can be kill because it's strange that he (and Whis) wouldn't come to a casual Tournament just for some food and company.
Top

Maybe Beerus can be kill because it's strange that he (and Whis) wouldn't come to a casual Tournament just for some food and company.

Beerus and Whis aren’t on Earth all the time. Why would they care about a low level tournament with iffy food. They’re only on Earth now because of Moro, meaning they hadn’t traveled to Earth in over a month.

precita wrote:Goku will still be around but take a Buu saga approach backseat.

Goku barely took a backseat in the Buu saga, at best he took a leisurely stroll round back while everyone else cried for him to come back.

It won't surprise me if Goku kills Moro. Unlike the DB series, Super does not have many major bad guys. Beerus, Champa, Jiren, and Broly are not bad guys. Super only has Freeza, Zamasu, and Moro as their own major villains so far. Freeza is the only one that was killed by Goku and Zamasu was erased from exsitence from Zen-Oh. I would honstley have Vegeta kill Moro, but Goku doing it is way more likely.
PS4 username: Guyver_Spawn_27
MAL Profile: http://myanimelist.net/profile/Hellspawn28
Steam: http://steamcommunity.com/id/GS27/
Top

Xeogran wrote: ↑
Mon Sep 28, 2020 10:34 am
Maybe Beerus can be kill because it's strange that he (and Whis) wouldn't come to a casual Tournament just for some food and company.

They weren't there because they weren't created at the time. When we get to EOZ, it'll probably be changed a bit to include the new elements and characters introduced since 2013.
Top

Everything is alright by the End of Z.

It's not like this franchise isn't known for retcon things or anything. Anyway new characters like Beerus and Whis can still die and other timelines or Universes can get erased.
A world without Dragon Ball is just meh.
Top

I would love to see Vegeta fight Goku over sparring Moro.
Top

Skar wrote: ↑
Sat Sep 05, 2020 5:35 am
I was checking the spine arts for a different thread and reminded of the discussion for Super's. I always had the updated spine arts in mind so I noticed something when looking over the one for the first release:

Some people theorized the yellow bar in Super's might be Uub riding the Nimbus. It's a nice reference to this one with Uub going the opposite direction of Goku. Also this one only showed the antagonists up to the Cell saga so Super's may not necessarily show every major antagonist. This doesn't indicate that it's ending soon and there's likely going to be at least one more arc but I just thought this was interesting.

I'd really like that. I remember Toyo saying they were already thinkng about reaching EoZ in an interview, but it's been a long time. Not only that, Uub was mentioned in both manga and anime (even appeared in the manga). Surely that means he's still part of the plans for the series in the minds of Toyo, Toriyama and Toei.

Do we have the spine arts available from Super put together like this?

I know it's a late reply, but I felt that I would show my Dragon Ball Super manga collection, which includes the first 10 volumes, the only ones that have been released in english until now. 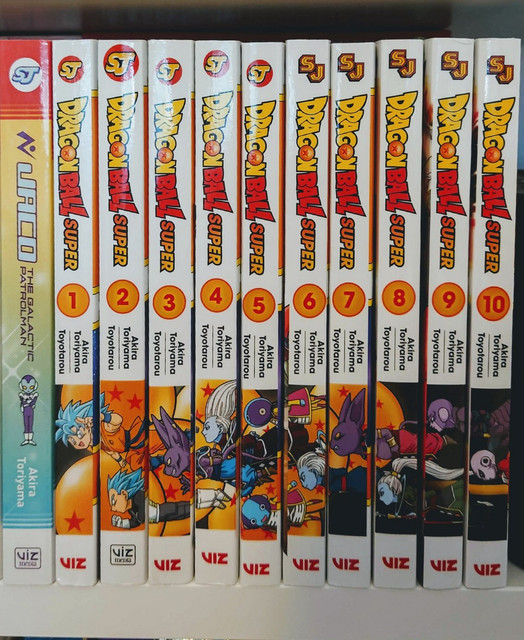 "Dragon Ball once became a thing of the past to me, but after that, I got angry about the live action movie, re-wrote an entire movie script, and now I'm complaining about the quality of the new TV anime. It seems Dragon Ball has grown on me so much that I can't leave it alone." - Akira Toriyama on Dragon Ball Super.
Top

Hmm if it does reach chapter 100, that would be about two more arcs. I could see that happening since Goku learned to use Omen at will this arc so it might take another arc or two to fully master UI. I assume that's the endgame unless Toriyama decides to introduce more transformations.

Also thanks for the spine art image

Does anyone else find it strange that they keep saying Moro can’t absorb the androids ki. Like obviously they don’t have Ki for fighting, but they should still have life energy for him to steal. They could give energy to the Spirit Bomb in the Buu Saga, Goku instant transmissions to 18, they could be brought back by the Dragon Balls While Android 16 couldn’t.

I know what he was going for, but it doesn’t really make sense when you think of it.
Top

DiscountDabi wrote: ↑
Tue Sep 29, 2020 2:28 pm
Does anyone else find it strange that they keep saying Moro can’t absorb the androids ki. Like obviously they don’t have Ki for fighting, but they should still have life energy for him to steal.

I tend to think of it as though they have a Human base, but are completely reliant on the Infinite Energy engine to live. If that weren't the case, Gero's remote (which, according to Daizenshuu 7, shuts off the engine) would just shut off their extra power and leave them as ordinary people, rather than deactivating them completely like it does.

This bit made me sit up and take notice - when does this happen, exactly?
Top

This bit made me sit up and take notice - when does this happen, exactly?

In the anime when they fight with Anilaza
Top

This bit made me sit up and take notice - when does this happen, exactly?

In the anime when they fight with Anilaza

But in the manga they also teleport away from jiren behind a random wall. I've always assumed even before this that he can teleport to anything in eyesight, it's just you need a ki to lock onto to go longer distances.

Either way I think this doesn't answer the do androids have ki question.

They must have at least genki, and they are still a living being. I assumed they had normal human amounts of ki and it just couldn't be detected for some reason.

It gets more blurry when you realise that 17 donating to the genki dama was a last minute replacement for Luncu
Yamcha almost certainly did not cheat on Bulma:
He was afraid of Women, Bulma was the flirty one.
Yamcha wanted to get married (it was his gonna be his wish)
He suggested they settle down in the Trunks saga.
Alternate future Trunks is not a reliable source.
Toriyama wanted new SSJ Kids and not make new characters.
Top
Post Reply