The movie was so good, probably spread from mouth to mouth and people actually wanted to see it. That's beyond awesome.
Top

With that estimation then I don't think this movie can make it to the top 10 highest anike box office of all time.

It's probably unlikely but not quite impossible. It needs to get to $134 million and it should be at least at $118 million at the moment.

In China, One Piece Film Gold made $15.6 million and Boruto the Movie made $15.4 million. If Broly could make anything like that amount then it would probably just about pass it.

I don't think it would though. Resurrection F made $1.6 million and this new My Hero Academia movie made $5.8 million.

At best I could probably see Broly doing better than the Academia movie which would put it more between $125-130 million.

So it'll probably have to wait until the next movie.
Top

So Box Office Mojo seem to have given the movie a bit of a (incomplete) update.

All they've done though literally is add up every single number on this page to get their international total.

It's still wrong because that list is missing off several dozen countries and some of the grosses that are listed aren't even up to date like UK or Australia but at least now it's not as far off as it was before.
Top

Portugal: $154,638
(All VAs of Goku and Vegeta around the world) (How DragonBall is also known) (DragonBall Super: Broly - List of confirmed countries)
Top

This was said to be coming out in China but the posts got removed and now I don't remember what date was given.

Anyone got the poster and release date again?
Top 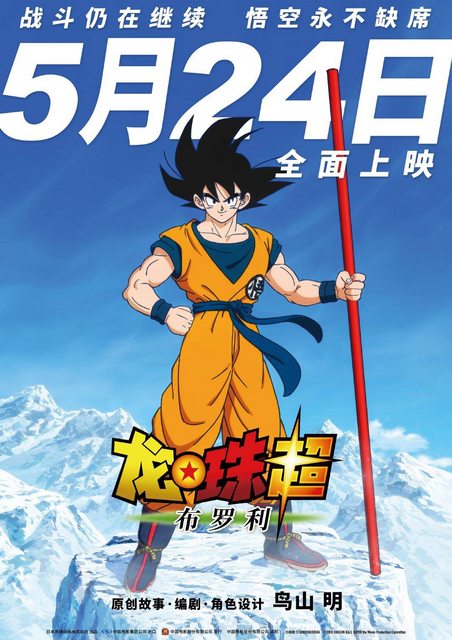 Box Office prediction for China:
$5,000,000 (source)
(All VAs of Goku and Vegeta around the world) (How DragonBall is also known) (DragonBall Super: Broly - List of confirmed countries)
Top

Why does China get the movie so late? With those kinds of box office predictions, you'd think they would've released the movie there way earlier.
Dragon Ball Super: Broly AMV
Top

So I guess the movie already release over there? When will we they release the box office collection?
Top

Super Saiyan Swagger wrote: ↑
Tue May 21, 2019 8:46 am
Why does China get the movie so late? With those kinds of box office predictions, you'd think they would've released the movie there way earlier.

There's a lot of bureaucracy you have to go through to get a foreign film released in China. Hollywood struggles and that's a far wealthier industry than anime.
"I like the money it brings in, but Dragon Ball Heroes is the worst. That's actually the real reason I decided to start working on new material. I was afraid Bandai would make something irredeemably stupid like Super Saiyan 4 Broly." - Akira Toriyama, made up interview, 2013.
Top

Only that much? Slow week in China?
Top

This is funny, because this isn't the case with movies.

An studio that produce a film in USA will receive 50% from the income in USA cinemas. However, it will receive less from other countries (For example: 25% from China).

I don't know how it works in Japan, but it should be a similar pattern with its country and other countries.


Of course, this isn't a problem for Broly , since it will still be a lot of money. Not to mention the other benefits with merchandise.
Top

Seems like the 5’000’000 estimate for China is for the whole run. They took too much time bringing it there, though, and that surely must have had an impact.
悟 “Vincit qui se vincit”

Final figures are out. It crawled and reached the ¥4bn mark in Japan. A ~7% increase over the previous movie. A respectable finish.
Top

I notice the absence of certain countries, for example Germany.
Top
Post Reply