Was Gohan consistently training after the events of F?

Was Gohan consistently training after the events of F?

Piccolo says he will "whip gohan into shape"

Goku told Piccolo in flashback "based on his old power, he should have done better (at zen exhibition)

Gohan himself asked Piccolo "when did you get so strong"

Piccolo even chides Gohan telling him "while you were studying, i was training"

Then before Gohan goes ultimate , he tells him "bring out the power you used against Boo" (remember gohan still had ultimate in BoG so its a good chance that line was referring to his level of power against Boo since he regressed by BoG


Even in the manga, we got the bonus chapter where Gohan said he'd been using gravity room but in ch.32 he credits piccolo for "whipping him into shape"

Both versions pushed some sort of him training after F but then credited Piccolo for completely whipping him into shape right before the ToP resulting in the most absurd power jump we've seen until Broly came along.

Thoughts? just an inconsistency , or maybe toriyama wanted piccolo to get credit for whipping him into shape right before?
Top

Well, perhaps Gohan was training on his own, but kind of hit a limit by himself. So Piccolo came in and began driving Gohan hard.
Top

No I don't think, I recall him saying in between those two points that he'd retired...might have been in the filler after the Future Trunks Saga....

No actually I think it was when Goku asked Gohan to take part in the Zen Exhibition, Gohan initially turned him down because he said he'd retired.

Either way no I don't think he continually trained. You mention it being implied in Episode 67 and I originally thought the same but now I'd say that wasn't the case, he was wearing his loafers anyway and I just think it was coincidental, he was sweating because he rushed over after probably just hearing about Trunks.
Top

I don't think so, he just trained before the ToP so he wouldn't get wrecked so easily. Aside from that he's pretty much retired.
Top

If the post-RoF intro and Gohan's demeanor after the arc is any indication, then he trained after RoF. However, I don't think it was necessarily consistent. He surely didn't make much progress and doesn't have the time to devote his life to training like Goku,Vegeta, Piccolo etc etc.
Spoiler:
Super carries on much of Dragon Ball and Z's charm in ways that might not immediately be obvious, while also bringing something new to the table. I certainly can't think of any previous arcs like Goku Black, and, for all its problems, the Tournament of Power is possibly the most ambitious storytelling endeavor in series history as far as how its narrative unfolds. It's also a thrill ride, which is all I wanted and exactly what I got. Super also canonizes decades old fan theories in ways that very naturally tie into the overall fabric of Dragon Ball's world in satisfying ways. All in all, Dragon Ball, Z, and Super are all well worth experiencing.
Top

Going by statements in the manga, Gohan had become a "total bookworm" by the time of Champa's tournament with Beerus. On the other hand, we do hear in the Super extra edition 3 that he's been recently using the gravity chamber at Capsule Corp in order to train; this happening during the events of the Zamasu incident. 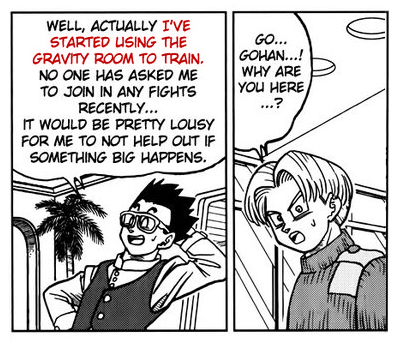 Judging by the prioritisation of his name before others like Piccolo and Buu, we might be able to assume that he was still was, or is now, more powerful than they are. If anything "big" is happening that would warrant Goku and Vegeta's involvement on the scale of Freeza or worse then how could he be confident in the idea of being an asset to them? Sounds crazy to assume that after just a few sessions in the gravity chamber he could already be stronger than Golden Freeza from some time back but with how this series operates, it's not impossible.
Top

I think that after the events of F Gohan at least trained himself back to physical shape.
Not only did he lose his Gi in RoF, he also lost all his muscle mass, both of which he had back during the Zen Exhibition Match, even though he was still not at his best he could at least transform into a Super Saiyan with no problems at all and also wanted Goku to see the progress he made.
悟 “Vincit qui se vincit”

I can't recall every line related to Gohan's training in Super , but based on what I do remember, which is him going to Piccolo twice to be "whipped back into shape", I'd say no. Even though the TOP went a long way in redeeming his image as a fighter, Super as a whole treated him really badly. I'm not talking about him having retired but about this inability to maintain a consistent direction with him. It's already bad enough that the theme of him not keeping up with his training and paying the price for that was already used in the Buu Saga and most fans expected him to have learned his lesson by the time Super rolled around, but they reused that theme over and over again in Super as well. At the end of the F arc he made a whole deal about wanting to protect his family. It just makes him look bad.
Top

we can assume he trained off and on at the time.
Top

If we look at it from what was likely happening behind the scenes, it's hard to say he was. What probably happened was they wrote that set-up of him training to get back into shape in the RoF arc, then Toriyama gave them two outlines in a row where Gohan had no involvement.

It seems like he was training in U6 but couldn't make the tournament due to work, then in Future Trunks it looks like he was retired but still seemed willing to fight when he heard about the problem (and 67 definitely implied he'd been training with Piccolo when he came to see trunks off). There was the filler ep where he sparred with Goku and had no problem going Super Saiyan, then the Zen Expo where he also had no problem going Super Saiyan and talked about having gotten stronger. The training with Piccolo where he regained Ultimate (and presumably SS2 as well) seemed to be more about giving him the last big push to get him over the line.

So if you look at it that way, it's pretty disingenuous to imply that he had retired completely in Future Trunks based off that one episode, or that he got all of his gains in 88. Ignoring the inconsistency regarding how they wanted to handle it, the internal logic makes sense if you assume he was training casually. Not completely slacking like he was prior to Res F, but also not devoting all his time to it like Goku, Vegeta and Piccolo do. And that would make sense; just because he said he would recommit to training doesn't mean he can drop everything for it like them. I'm picturing his training with Piccolo as being like an one to two hour gym sesh after work, or maybe once a week on his RDO. You know, like what normal people do when they've got a job, family and exercise regime to balance.
Top
Post Reply