I thought this episode was great. I loved how Shida storyboard this episode. Takahashi and Shida work so well together. I love the build up in the beginning. I thought the fights were really good beginnings to the end of the TOP. I loved how Vegeta didn't give up in the end. The episode also tease us about what does Jiren truly want in life and it made me realy question Jiren's character in the anime. What is his wish going to be? I loved how he beat Vegeta and it made me shocked when I first saw it. I don't think Vegeta is going to get Ultra Instinct yet. But, I have some questions when watching the next episode preview. The new ending looked like bad to me but I did like the song. This was a great start to the end of the Tournament of Power!
Rating : 8 out of 10
Majinwarman
So I'm 'evil', huh? Interesting."
A world without Dragon Ball is just meh.
Top

It's original because the anime did it and that's all that matters.

But no I jest. I just found the huge amount of hatred to homages to be overblown. Yes they can be annoying or pandering, but it's really not bad honestly. At least for me I am sometimes impressed, but mostly indifferent. I'd rather not have them at all...but eh as long as it's kept to a minimum. Though I think the U6 arc also had the same homage if I recall correctly...though less so than this one.

Pointless homages are really bad. They're there for fanservice, and fanservice is usually just a cheap way to grab a viewer's attention. I have no problem with homages if they're used in a creative way or to showcase a character's growth. Like, say Cell fights Vegeta again for instance. One neat homage would be Vegeta elbowing Cell's back like Cell did it to him all the way back; the positions are switched so the parallel/homage would be justified. Now, something like this, what purpose does this serve? How does this tie-in with the Cell arc or the Cell fight in any way? It doesn't, so it's stupid, it's pointless, it's unoriginal and lacks in creativity.

Oh I agree with you don't get me wrong. I just don't think it's the end of the world or the reason why something is automatically bad by default. The manga homages therefore it's bad. The anime homages therefore it's bad. I think that kind of thinking is excessive. That's all I mean. I agree entirely with your points though. I feel the same way.
Why Dragon Ball Consistency in something such as power levels matter!
Spoiler:

I liked the episode, but I didn't understand why Jiren was laying down after the Final Flash. Was it that strong?
[i]"I have yet to show you, young warrior, what I'm truly capable of."[/i] - Cell
Top

a little too many Zeno cutaways in this one.. I think I counted 5.. everytime he does it its annoying and its no exception in this episode as well
Top

.The New ending was a downgrade,I did not liked it, the song was the only positive.
Top

mAcChaos wrote:I liked the episode, but I didn't understand why Jiren was laying down after the Final Flash. Was it that strong?

Yeah I found that weird too because he got right back up and acted like he wasn't affected by it. Is he just that much of an a**hole or did the attack really not hurt him? Maybe he was playing possum.
Big fan of the characters of Dragon Ball, all of them, especially formerly prominent sub-characters. -__-
Top

Thought the episode was ok, definitely felt like it was overhyped. Vegeta's parts were ok. Liked the moment where he read Jiren's movements. I felt Jiren and Dyspo were the coolest parts of the episode. I loved Jiren's finishing move and I liked his discussion about strength with Goku. You learn Jiren isn't basing after strength, but something beyond it, and I also liked his conversation with with Vegeta about Vegeta having no purity in the way he fights. As for Dyspo, him ragdolling Freeza was priceless.
Top

So glad that they decided to make all the spectators sit together. Now whenever it cuts away to the audience it makes it seem like there's more of a crowd watching. This will also lead to more shit-talking between universes since they're so close to each other now.

Just when Jiren is starting to show personality and started becoming interesting, he's becoming very unlikable again. He's talking about how Vegeta is such an arrogant fighter when Jiren himself is probably the most arrogant Dragon Ball character ever.
Top

Visuals were obviously incredible. But the writing certainly left something to be desired...I thought it was pretty bad to be honest. The two conversations Jiren had with Goku and Vegeta were some of the most vapid, boring "nothing-speak" in this tournament. You can tell the writers are struggling to come up with things for the characters to talk about. This is likely because Jiren is such a bland, nothing character.

The episode was still pretty damn great, but mostly because of the spectacle, not the actual substance.

It was certainly overhyped, in the sense that it was basically just your average good Super episode that looked prettier than usual.

Also, maybe it's just the Goku fanboy in me, but my favorite part in the Vegeta centric episode was a Goku scene. It was that scene in the very beginning with Goku screaming in Jiren's face as he transforms. Alpha as hell lol.
Last edited by Artorias on Sun Jan 07, 2018 12:20 am, edited 2 times in total.
Top

The Good-The fight between Vegeta vs Jiren was amazing.-Dyspo grabbing Frieza was pretty hilarious.-Toppo vs #17 and Gohan was decent.-Glad they didn't took the predictable route of Vegeta being in mediately ring out in the episode The Bad-The bleachers thing was dumb,No one taking sides, which I was disappointed by that also Zeno was pretty annoying I seen way too many shots of him fawning.-The final flash of Vegeta was just a retread of the cell saga.-Vegeta was really generic and so is Jiren. VerdictIt was an ok episode but not the greatest and I did not liked the ending.
Last edited by Spider-Man on Sun Jan 07, 2018 12:26 am, edited 5 times in total.
Top

Jiren's reaction was also like Cell's ''Oh, shit!'' and Vegeta's words when he kicked Jiren in the gut (''You were faster and stronger when you fought Kakarot!'') were similar to the ones he said when he kicked Goku's gut in the Saiyan Saga (''When you defeated Nappa, you had to have been doing better than this!'').
Top

TheUltimateNinja wrote:Seems this episode was overhyped after all, nothing happened.

Just because no one has been eliminated doesn't mean "nothing happened".

This episode was great, exciting from the beginning to the end.

Huh? We pretty much knew everything that happened in the Special episode from the spoilers before we saw it, just because we know that will happen doesn't mean "nothing happened".
If you have a problem with that you can stop watching NEPs or twitter images and spoilers.
Last edited by OverHeaven on Sun Jan 07, 2018 12:27 am, edited 1 time in total.
Top 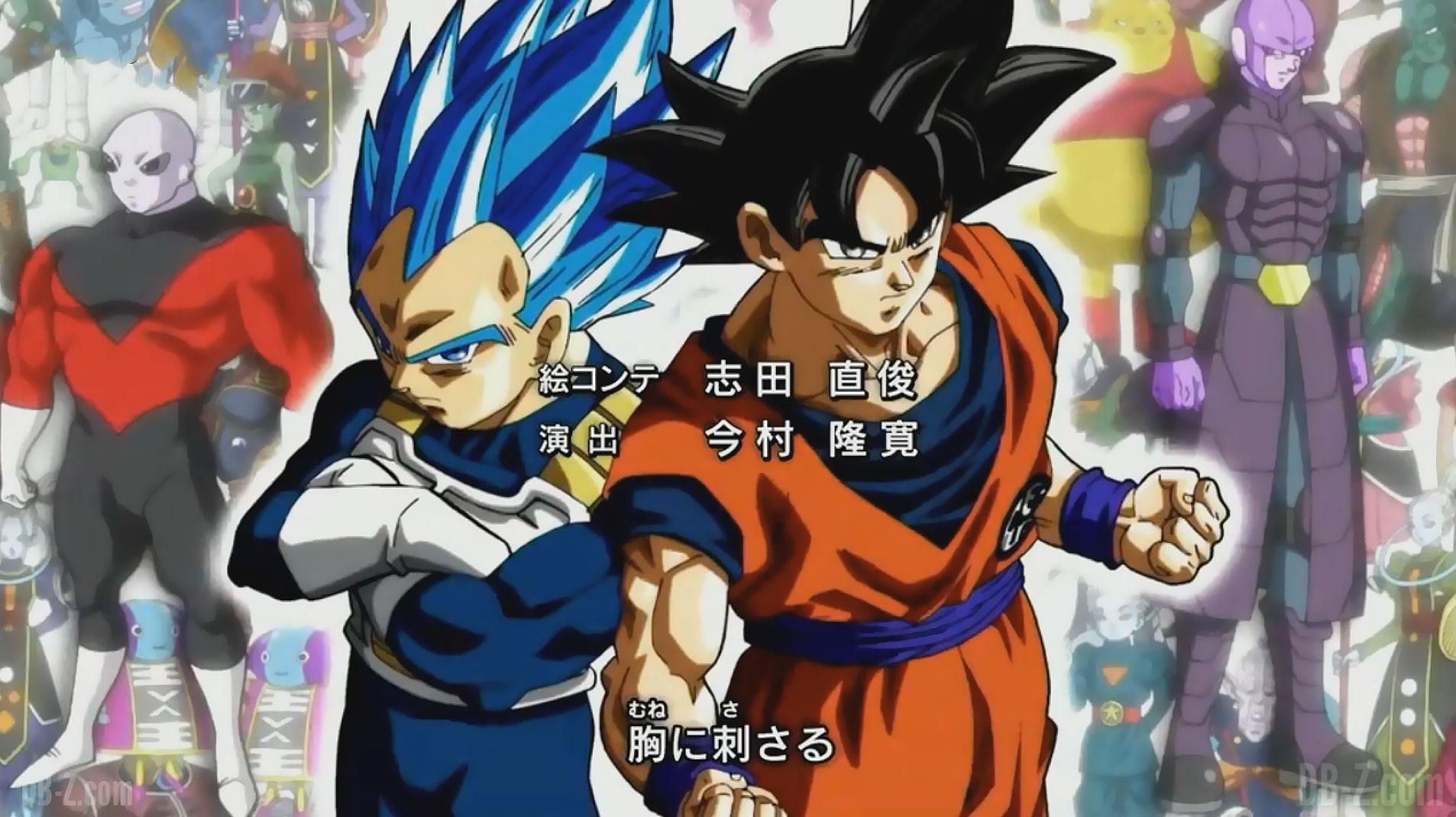 He's standing besides UI Goku and has the same aura so it's either similar to it in some ways or it's just him being on Goku's level of importance.

One thing's for sure, this and the next episode(s) will most likely be enough to kill the whole "Vegeta won't do much in this arc and will be replaced". Vegeta alongside Goku are the heart and soul of DB and no one is replacing either of them.

The ending on top of supporting that tells me that by the end of the tournament these 2 will be the strongest men standing, not Jiren.

I wish I could be this delusional about Vegeta as well. First the NEP of last week was all about Vegeta performing better than SSBKKX20 Goku now it's revealed by said Vegeta this episode that Jiren wasn't even using close the power in this fight that he used in the first fight so it makes Vegeta look even more pathetic this episode.

What I wonder if how the hell can Goku be able to fight Jiren without going Ultra Instinct.
Top

Super Saiyan Swagger wrote:So glad that they decided to make all the spectators sit together. Now whenever it cuts away to the audience it makes it seem like there's more of a crowd watching. This will also lead to more shit-talking between universes since they're so close to each other now.

I enjoyed this too. I wouldn't mind the cutaways if it were just the tense interactions between those in the stands. The Shin & Khai exchange brought a smile to my face. I just wish the other U11 fighters had more of a personality to increase the tension with U7
Big fan of the characters of Dragon Ball, all of them, especially formerly prominent sub-characters. -__-
Top

Melee_Sovereign wrote:Just when Jiren is starting to show personality and started becoming interesting, he's becoming very unlikable again. He's talking about how Vegeta is such an arrogant fighter when Jiren himself is probably the most arrogant Dragon Ball character ever.

Lol Vegeta is far more arrogant than Jiren. He was right.
Top

I was rolling my eyes at the Final Flash stuff. It was such an obvious callback to Cell beat for beat that it made Vegeta seem stupid instead of arrogant. That said, I'm super glad Vegeta didn't get eliminated and appears to have an even bigger part in all this than I had ever imagined he would. So, I'm pretty excited.
Top

What I take from jiern and his fight with Goku and Vegeta in this episode. Is that after the fight with Goku in UI made the saiyans a interesting race. So even though he's not full power. He like Goku and want to see the full potential of the fighters than out right destroy them.

As for this episode I thought it was good and Vegeta will be important in this final arc
Gohan and 17 short clips against toppo was good along with dyspo vs frieza saying he going to be killed again.

Vegeta's new transformation looks interesting wonder what triggers it since ssb is of calm mind?
Top

The gr wrote:Did anyone find it weird that Dyspo send the death threat to Frieza

.The New ending was a downgrade,I did not liked it, the song was the only positive.