That was a good episode, full of strategy and display of some techniques.


- Man, Zen-Oh antics are getting irritating as F***, but no point in complaining about something we have to deal every damn episode since the ToP began.

- Damn Gohan was really close eliminating Toppo, 17 had a good strategy! Too bad it didn't work it.

- Never though I would see Goku producing landmines with his Ki, that was an interesting move

- I was about to complain about him using Kienzan like it was a random stuff, but he also almost caught Jiren by surprise with it, nice!

- I don't why Beerus said "if that doesn't work I don't know what..." like he forgot that Goku is still able to use the Ultra Instinct, is not like KKx20 + SSJB is his full power.

- I really would prefer that Vegeta have thoughts about Bulma and Bra when he was about to go "Ultra" Blue, I don't really dig that Cabba is that important to him

- And Goku is not even impressed by what Vegeta have achieved? Did he saw that before?

- I'm glad they're fighting together without any BS and willing to cooperate to take Jiren down!

- NEP shows that Gohan is helping Freeza against Dyspo, but why the F*** he abandoned his fight with Toppo?

Noah wrote: - NEP shows that Gohan is helping Freeza against Dyspo, but why the F*** he abandoned his fight with Toppo?

Based on the episode, I'd guess that 17 figures working with Gohan is a bad idea since they can't coordinate their attacks at all, so he may insist to Gohan that he take Toppo on himself (which is a foolish move, if that happens).
Top

The Buffed body reminded me a bit of Super Vegeta, the time when he fought Semi-perfect cell. Sadly that`s the only good thing about the form. Pupils look bad on Gets, actually if his eyes went blank, that would have been better probably. The aura is horrible too, kinda reminds me of Mastar`s SSJWhite sparkles, but worst animated and far too many of them. I miss the SSJ2 clean aura with lightnings here and there

Otherwise I liked the episode. There was action and strategy here and there. Not too bad. I dunno about Jiren`s power level. Maybe Goku and Gets got some Zenkais, I can`t tell. But they are healing very rapidly these last episodes, especially Vegeta. As much as I like him this seems rather odd.

124 Preview: Beerus was acting menacing I wonder what that`s all about.
https://www.facebook.com/dnavenomart/
https://www.artstation.com/artist/dnavenom
http://dnavenom.deviantart.com/
Top

I enjoyed it much more than last week despite it looking a lot worse. Loves Jiren's Power Fist like moves and Goku's combat IQ on full display was easily the highlight.
Top

The animators of the last two episodes should have been reversed. If this ep had last weeks animator it would have been a contender for a 9/10 episode.
Top

That was a real good episode, a lot more action packed than I was expected. Probably one of the most action packed actually, might be why the animation wasn't as great as last pick but I certainly won't whine about it, it's far better than what we had at one point.
Top

Also, him grabbing a Kienzan by the blunt parts and throwing it back was something I wanted to see for a long time done by someone. Certainly better than taking it head on. Keeps the move feeling relevant.
English is not my first language !

The great storyboard and direction did an excellent job of masking the standard/mediocre animation. Again, this is the exact opposite of last week, where I felt that the technical animation was impressive, but the action wasn't very engaging.

It's always nice to see clever Goku strats, and that was on full display here. Obviously it didn't work, but I enjoyed the Krillin call back. The Goku and Vegeta team up at the end was also really cool to see, and I actually love the idea that Whis states, that the reason Jiren can't keep up as well with them is ironically because they AREN'T coordinating their attacks. That's certainly an interesting concept that I've never really seen in this series or any other.

Jiren still sucks, and Vegeta's form is a cringey asspull, but I guess my expectations were so low that I got over it pretty quickly. Whatever at this point.
Top

I'm going with 'ASSB' for now.

I mean, they clearly just slapped blue hair on one of Vegeta's previous forms and called it good...
[spoiler] 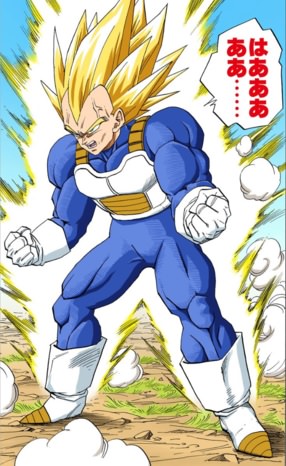 This whole time watching the episode, I couldn't help but shake the feeling it could've been potentially better the whole time. I loved the storyboarding, and outside of that stupid Freeza's not allowed to struggle against Dyspo bit, I thought the writing held up with so much tactical flair and enterprise. Really, it was all set to be a grand episode..... and then Kitano had to be the one mainly animating so it essentially flopped. I hate to single the guy out like that, but man, his animation work just... leaves so much to be desired. Definitely not fond of his output, even without the time constraints that I thought he was plagued with during early Super.

I also find it funny that Vegeta's new form derives power from his feelings from Cabba's erasure rather than fighting for his family's potential survival. He's still supposed to have a dedicated episode to star in so I'm hoping we get to see some family-man Vegeta there, but it'd be weird not to give him a "MY BRA / BULLA!" moment in the Tournament. Otherwise, her birth doesn't amount to much in terms of enlightening Vegeta as a person.
By jove, I've got nothing important to say!
Top

Yeah the art animation first half wasn't that good but the second part much better. I really hope the main episodes will be perfect art and animation-wise. Episode 125 126 and the final etc.
Top

Was Vegeta actually buff in his new form or was it just how that one shot was drawn?
Top

Good episode. Goku's strategies for fighting Jiren were new and exciting. Goku learning from his spar with Krillin, and adapting that into his fighting style was good to see. This episode could've hurt itself from a power scale standpoint by having Jiren power up only to be overwhelmed by the two Saiyans, but saved itself by offering an explanation. Goku and Vegeta were fighting together, but it was sporadic and reaction based which threw Jiren off.

This goes back to what 17 told Gohan. They weren't used to fighting together, and Gohan was trying so hard to mesh with 17 that their effectiveness was decreased. This may be the reason Gohan leaves 17 on his own next episode. I hope the next episode doesn't start with Gohan helping Frieza with no mention of conversation between Gohan and 17.

As far as the bad goes, obviously, the animation wasn't stellar. From a writing standpoint, it makes no sense for Jiren to A) not eliminate the Saiyans when he puts them down (Warrior, Sleep) B) Power up just to show what he could do if he wanted to. There's less than 10 minutes left, does Jiren plan to win or what? If Goku and Vegeta's uncoordinated teamwork is gonna work, then it needs to work. I don't really need another "Now this is my REAL power" moment from Jiren. I understand things are supposed to be aesthetically pleasing, but having Jiren fight in an under powered state to stall for cool moments has to have an expiration date.
Top

The Good-I like goku strategy against jiren,The landmine with his Ki was a creative move.-Gohan and #17 vs Toppo was alright,#17 had a good strategy!-Zeno imitating Jiren was so cute.-Jiren ability is interesting I like the whole Ki fist thing he has.The Bad-I really wish Vegeta obtain his new form by his family and to wish back U6 instead of the whole Cabba thing which I didn't dig that at all.-The animation look clunky.Overall decent episode definitely better than last week.
Last edited by Spider-Man on Sat Jan 13, 2018 10:58 pm, edited 1 time in total.
Top

This episode was great but ik this is simply a taste of whats to come. I sense far more epic moments coming in the final 3 minutes.
Top

The episode was awesome but it felt more of a preview than an actual episode, it's going to be 2 weeks before we see Goku/Vegeta against Jiren as next week is where Dyspo will likely be thrown out.
Steam: Rukiri89 | uPlay: Rukiri89 | Origin: XxRukiriXx | Xbox LIVE: XxRUKIRIxX89 | PSN: Ericks1989 | Nintendo Network ID: Rukiri

Bullza wrote:Was Vegeta actually buff in his new form or was it just how that one shot was drawn?

He is buffed.
Top

Nice episode, it's always nice to see actual fighting strategy rather than just screaming to power up and shooting lasers. Of course, the strategy ultimately amounted to nothing. And again Vegeta pulls a new transformation out of thin air.

Art and animation were a bit off here and there, but nice episode overall.
"The life is the hardest video games of ever. Because you have only one life and the powers are kinda lame. And sometimes a stage takes years"

This episode was terrible. Vegeta's new form is such a cringey unforgivable asspull. Far worse than Super Saiyan Ikari Trunks. At least we know that his new form is weaker than UI and Goku is still the superior warrior.
Top

Kaiosama wrote:This episode was terrible. Vegeta's new form is such a cringey unforgivable asspull. Far worse than Super Saiyan Ikari Trunks. At least we know that his new form is weaker than UI and Goku is still the superior warrior.

How's it an asspull when they tell you what he did? That was a lot more explanation that most Dragon Ball forms get.
Top
Post Reply