I wasn't really sure whether this fit more this section or in-universe, but since I'm thinking of it more in just a design way...I'm opting for here. I should also add that this isn't really something I'm clamoring for, just something that occurred to me earlier.

Suppose a video game in the future (like Heroes or something) decided to give a what-if 'Golden' form to Cooler - it's entirely possible, since there's been plenty of what if forms for characters in games before. If such a thing happened, which form do you think would get the design tweaks applied to? This one - 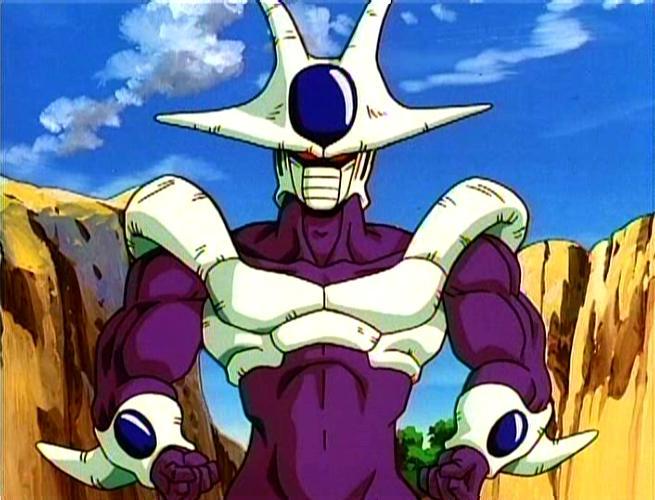 On the one hand, Freeza utilized his Golden form from his final form (which is basically akin to the first one we see Cooler in), rather than his 100% form, so it's possible it'd be that one for Cooler as well. At the same time though, Cooler's 'final form' is much more of a new form entirely than Freeza's 100% one was, which was basically just his final form only more muscular. So either option is logical enough for what it is...although given that Heroes is the most likely place something like this could happen, logic is the last thing they'd be thinking of anyway.

Which of the two forms do you guys think would most likely be tweaked for this hypothetical new form for Cooler? Which form would you rather see it happen for, if at all? For my own part, I'm expecting that if it happens, it'd be to the first one, but personally I'd prefer the latter, as it'd make the form at least a little more different from Freeza's than it would otherwise be.
AniManga Travelogue - Currently Reviewing: Dragon Ball
Twitter
"There are two kinds of folks who sit around thinking about how to kill people. Psychopaths, and mystery writers. I'm the kind that pays better." - Richard Castle, 'Castle'

I'm pretty confident that if it happens, the first one would be chosen. Metal Cooler already went with it.
Didn't Freeza mentioned he purposely made his color Gold? There's the chance Cooler goes in another direction. Pink Cooler would be fun.

I don't particularly like Cooler further form, I would much prefer if it was applied to it's regular form.
Top

Freeza's 100% power "form" isn't a real transformation. He likely only buffs up because he's not used to controlling that power, so there was no real reason for that to be a design base for Golden Freeza after he trained.

Coola's "Super Evolution" on the other hand is an actual transformation. It was actually akin to his race's version of Super Saiyan (prior to Golden Freeza literally becoming gold). That's why he drops out of the form prior to meeting his "death" at the hands of the sun at the end of DBZ Movie 5. So if Coola were to unlock an Ultimate Evolution like Freeza did, it would likely use his "normal", Freeza-esque form as the base.

In-universe though, given that Freeza states he had some control over designing his Ultimate Evo (at least the golden color), it's possible Coola could make his version look like a further transformation from his Super Evo and some other color if he wanted to.
Direct translations of the Korean DB Online timeline and guidebook.
My personal "canon" and BP list. (Coming Soon)
Top

Platinum (color chosen) Cooler should be a thing since he loves one-upping his brother.
"Dragon Ball once became a thing of the past to me, but after that, I got angry about the live action movie, re-wrote an entire movie script, and now I'm complaining about the quality of the new TV anime. It seems Dragon Ball has grown on me so much that I can't leave it alone." - Akira Toriyama on Dragon Ball Super
Top

How about Red 5th form Cooler? That would look neat.
Cool stuff that I upload here because Youtube will copyright claim it: https://vimeo.com/user60967147
Top

Kool-Aid Cooler? Kooler-Aid?
English is not my first language !

fadeddreams5 wrote:Platinum (color chosen) Cooler should be a thing since he loves one-upping his brother.

I was thinking the same thing, but with his bigger transformed state. He'd look pretty slick.
http://www.kanzenshuu.com/forum/viewtopic.php?f=11&t=40715&start=20#p1439892
http://dba.bn-ent.net/character/barduck.html
https://i.imgur.com/86hOk5i.gif
Top

fadeddreams5 wrote:Platinum (color chosen) Cooler should be a thing since he loves one-upping his brother.

I was thinking the same thing, but with his bigger transformed state. He'd look pretty slick.

Like Gold or Platinum Shredder.
The biggest truths aren't original. The truth is ketchup. It's Jim Belushi. Its job isn't to blow our minds. It's to be within reach.
"You miss 100% of the shots you don't take - Wayne Gretzky" - Michael Scott
Happiness is climate, not weather.
Top

Since "metallic" counts as a color in Dragon Ball (Sergeant Metallic) does that mean Metal Coola was the counterpart to Golden Freeza all along?
"Like that bald punk? Killyin... You're talking about Killyin?!!" - Anime Labs

Thouser wrote:Since "metallic" counts as a color in Dragon Ball (Sergeant Metallic) does that mean Metal Coola was the counterpart to Golden Freeza all along?

Thouser wrote:Since "metallic" counts as a color in Dragon Ball (Sergeant Metallic) does that mean Metal Coola was the counterpart to Golden Freeza all along?

Yeah, that's what I thought too! Although, I don't remember Cooler calling himself Metal-Cooler

I don't remember if they use it in the movie but he's labeled that in Daizenshuu 6 (pg. 89).
"Like that bald punk? Killyin... You're talking about Killyin?!!" - Anime Labs

If Metal Cooler wasn't a thing, I would honestly say that would have been the appropriate alternative transformation for him reaching the equivalent of Golden Freeza.
Spoiler:

Lord Beerus wrote:If Metal Cooler wasn't a thing, I would honestly say that would have been the appropriate alternative transformation for him reaching the equivalent of Golden Freeza.

Though, to be fair, I never understood why the creators of movie 6 did not have actual Cooler in his Final Form, but with a Meta-Cooler body and was connected to the core. Instead, we got Cooler that looks like he tried to hook up with a TV.
http://www.kanzenshuu.com/forum/viewtopic.php?f=11&t=40715&start=20#p1439892
http://dba.bn-ent.net/character/barduck.html
https://i.imgur.com/86hOk5i.gif
Top

At the end of Movie 5, Cooler was back in his first form again when he was being shot into the sun for some reason. So Movie 6 used his first form for the Metal version.
Top
Post Reply