Yeah, it’s another one of these threads. After the latest news of the past 24 hours with a certain Saiyan, I thought it was appropriate to do one of these. I’ll start now.

Dragon Ball Episode 14: Goku's Rival wrote: Muten Roshi: Bring me a Pichi-pichi gal here. Do that, and I can train you
Son Goku: What's a Bitchy bitchy gag?

Dragon Ball Super Chapter 24: Son Goku's Evolution wrote: Zamasu:What about you?! Are you prepared to kneel before god?
Vegeta: Don't screw with me... I an the Prince of all Saiyans... Even if I have to die... ...I'LL NEVER GIVE UP MY PRIDE!!!

Innagadadavida wrote:I don't really think it's worth getting worked up about. Very soon we will have our own Wiki. And over time, it will be bigger, better, and more accurate than theirs. We'll have standards. We'll have quality control. We'll have better information. And I'm sure, people will naturally gravitate to it once there is some substance.

The best way to fix the giant cancer that is the DB Wiki is to provide an alternative for those who really want it. Even those who prefer dub names will wind up looking things up on the Kanzenshuu Wiki. Because sooner or later, they're going to need information they know they can trust.

penguintruth wrote:"New in 16:9! It's DBZ as you've partially seen it before!"

VegettoEX wrote:Gonna publish a book called “The Kanzenshuu” and it will have 199 blank pages followed by 1 page with text that simply says “nah Goku is gay though”.

I would normally consider Movie 15 as well, but seeing how it just contibutes to this nonsense that the "main series" has become these days, I'll leave it out with the rest of the crap works that have been released after 2014.

With due time, I might start consider Heroes' Dark Demon Realm and Prison Planet saga (and whatever more interesting sagas they can come up with), but we shall see.
Top

I have to be critical here, do we really need another thread about canon? It's been discussed to death the past couple weeks it seems like. It's getting kind of tiresome. Mainly because nothing good or worthwhile ever comes from these discussions. Maybe I'm just being pessimistic.
Top

Bardock the father of Goku special.

The history of Trunks special.

Everything else is irrelevant for all I care
Top

I don't have a personal canon as there is no such thing. I do have a preference of what material I think adds to the original story. In addition to Toriyama's original story, I like bits of fight filler like Tenshinhan countering Goku's boston crab, I like Gohan training before the Saiyans. Hell, I prefer the pendulum room depiction of a wartorn Planet Vegeta (assuming that was Vegeta) to the technologically advanced Planet Vegeta in the Bardock TV special. Lastly, I like parts of GT, but it's not so good that it's my perferred depiction of how Goku's story keeps going. And again, these are my preferences, but they aren't canon.
The biggest truths aren't original. The truth is ketchup. It's Jim Belushi. Its job isn't to blow our minds. It's to be within reach.
"You miss 100% of the shots you don't take - Wayne Gretzky" - Michael Scott
Happiness is climate, not weather.
Top

ABED wrote:I don't have a personal canon as there is no such thing. I do have a preference of what material I think adds to the original story. In addition to Toriyama's original story, I like bits of fight filler like Tenshinhan countering Goku's boston crab, I like Gohan training before the Saiyans. Hell, I prefer the pendulum room depiction of a wartorn Planet Vegeta (assuming that was Vegeta) to the technologically advanced Planet Vegeta in the Bardock TV special. Lastly, I like parts of GT, but it's not so good that it's my perferred depiction of how Goku's story keeps going. And again, these are my preferences, but they aren't canon.

I agree with you.


I don't have a personal canon as there is no such thing. I do have a preference of what material I think adds to the original story.

The DB manga never had so many mistakes, nor those were this constant."

Taking a different tack, this is how I manage all the various different continuities (considering that there is no solid canon as such).

My canon is already in my signature, but I will actually explain it better here.

- Dragon Ball Minus. Chronologically it happens first, and it comes from Toriyama. Yes, Bardock’s special is superior but unfortunately this one contradicts many of the story elements from the special. The scene where Bardock challenges Freeza still appears in the manga, and it was 1:1 with the special, so I personally believe that, until proven otherwise, after Goku is sent to Earth, the events of the special which can fit with Minus still happened.
- Jaco: The Galactic Patrolman. Of course, it was written by Toriyama to fit with the canonical events of Dragon Ball, and it does indeed fit.
- Dragon Ball Manga. The definitive Kanzenban version.
- Dragon Ball Super. The anime version. This overwrites BoG and RoF, as Toriyama personally wanted the movies to be retold, thus it takes precedence over those and can be considered the true continuation of the original manga. This also includes the upcoming Broly movie too, as it is under Super’s brand and written by Toriyama.

I believe that the main canon, in Dragon Ball’s case, is made up of the stories coming from the original author or considered by him when writing new stories. Even if I dislike some aspects of the stories and even if there are some very good stories not from Toriyama. Therefore, when I think about Dragon Ball’s “true story” I consider these to be the pieces of media where one can read/see the real story. Of course I can also consider DBZ Movie 9 and 13 as canonical, as they fit with the main continuity and do not change or shape the story in any significant way, being self contained stories.
悟 “Vincit qui se vincit”

I still enjoyed other parts of the franchise like some of the earlier movies, BoG, and Neko Majin but I prefer to view the rest as taking place in alternate universes.
Top

Pliable time, everything happens, no such thing as contradictions. End of this.
Dragon Ball Love, a Facebook DB fanpage in spanish <3
Top

simtek34 wrote:Yeah, it’s another one of these threads. After the latest news of the past 24 hours with a certain Saiyan, I thought it was appropriate to do one of these. I’ll start now.


I have 3 personal canons. I'm more of the view point of different media being their own thing than saying something's not canon because it didn't happen in the manga. It's like saying (WALKING DEAD SPOILERS) Carl's death isn't canon because he didn't die in the comics.

There is no established "canon", only separate continuites and individual interpretations of those continuities. Here's mine.

Toriyama:
Modern Era Toei:
Classic Era Toei:
What-Ifs:
*: Minor details of the modern films are sometimes retconned by the Super manga. Regardless, this still mostly works as a cohesive continuity.
**: May or may not include The Final Chapters, which contains minor details that are contradicted by the Super anime. Regardless, this too mostly works as a cohesive continuity.
Last edited by Marlowe89 on Wed Jul 11, 2018 4:24 pm, edited 1 time in total.
Top

My personal canon is a very strange mish mash of different versions, fanedits, and such, so bear with me. This is all specifically the Japanese version.


Kunzait_83 wrote:No matter what twisted pretzel logic you contort yourself into to try and convince yourself otherwise, Raditz landing on Earth is the middle of the fucking story. Zero context, zero setup. Its in NO way meant to be seen as a "beginning point" for ANYTHING other than the next story arc. It flows precisely and fluidly from where things left off in the aftermath of the 23rd Budokai and mostly hits the ground running from there without really stopping to look back. You're plopping someone into the middle of a book starting at chapter 195 out of 519 for absolutely no good goddamn reason, with very minimal opportunity to look back at much needed context and character/story growth.

My canon is generally the main series (anime/manga, with the films being basically their own thing)...

But with Dragon Ball Minus in it too. 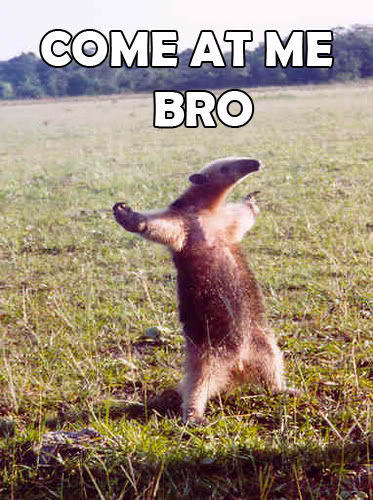