For some reason it took Manga UK a while to release the original DBZ movies and specials, despite DB movie 1 and the GT special being released on their banana and green bricks respectively. This seems odd at first glance, but then when we look into the history of what AB Groupe did and didn't release it brings some possible explanations to mind.

I know it's been theorized by some here that Manga UK couldn't release the movies and specials for a while because AB Groupe may have been holding on to the rights to them and charging outrageous prices for the license, but what's interesting is that the only Big Green dubs that we know were produced but never released on home video (OG DB movies 1-3 and the GT special) coincided with the movies and specials Manga UK were seemingly able to release prior to 2017. I know Manga UK haven't released OG DB movies 2-4 or 1 uncut but if the license for them was more easily obtainable than the one for Z then hypothetically they could release them anytime.

Additionally whenever Manga UK have been asked to clarify why they will never release the Ocean dubs they have said its due to rights complications. A friend of mine was also told by Jerome in a Facebook message recently that there have been rights issues with accessing the Ocean dubs Manga UK haven't figured out yet. Now I'm not suggesting Manga UK could eventually release the Westwood and Blue Water dubs, but since they have said on more than one occassion there have been unforeseen legal difficulties with acquiring them I believe they have at least looked into it at some point due to fan demands, possibly gave up when they knew what it would cost (which would definitely be more than they usually pay when there is no existing DVD release to import) and that there may be more to it than simply calling TOEI and AB/Mediawan and negotiating a deal.

Additionally, AB Groupe held the rights to at least distribute the entire series to TV stations like Cartoon Network, CNX and Toonami UK in the early 2000s, but never put anything on home video aside from DBZ movies 2-4. This could be for a number of reasons. On one hand they may have not sold as well as AB had hoped when people who bought the DVDs/VHS found out it wasn't the American or Canadian casts, on the other they could have attempted releasing the series because it was already doing well on TV. Regardless of how well or poorly the big green dub home releases sold I'm sure a DVD/VHS release of the Saban dub for Z or Blue Water dubs of OG DB and GT in the UK with 3-4 episodes a pop would have done better because the intended customer base was already familiar with the casts. They could have tried releasing a few volumes with the first few episodes of Blue Water OG DB as this was the start of the series and a logical starting point for fans wanting to collect the series and the perfect trial run to see if sales would justify releasing more sets. From my perspective unless AB Groupe couldn't work out a deal to release these dubs because they lost the home video rights to the Canadian dubs, GT special and OG DB movies 1-3 specifically this would have been a missed opportunity, but it could also explain Manga UK's insistence on "rights complications" regarding the Canadian dubs.

It would also explain why the big green dubs of OG DB movies 1-3 and the GT special were never released on the Scandinavian DVDs as an extra audio track like DBZ movies 1-9 were.

In light of this could it be possible AB Groupe for whatever reason weren't able to acquire the home video rights for either the Canadian dubs or the movies and specials other than the Z ones, and could only distribute them to broadcasters? Perhaps another distributor secured the rights and sat on them, but eventually sold the home video rights to the OG DB movies and GT special to Manga UK? Ultimately we may never know for sure, but the aforementioned pattern brought this to my mind.
Selling
- Arrival DVD single
- Betrayal DVD single

Whatever the reason was for it taking until 2012 for a UK home release of the series, it just makes me thankful for where we are today. There's no way to say for certain why AB Groupe never attempted putting the series out. At the very least, they could have tried acquiring the Pioneer and Funimation movie releases to test the waters.

I don't know what lead to their decisions, and maybe licensing did play a part, but my impression of AB Groupe has always been that they were out to make a quick profit. No matter how I look at it, there wasn't a good reason for them putting out the Big Green movies, rather than going for the established casts.

Another thing that makes me think they were indifferent to the UK fanbase is the toys that came out at the time. While the Android saga was airing on TV we had toys of Janemba, Super Buu, Gotenks, Vegito, SS3 Goku, and many other characters that viewers wouldn't see for over a year. Movie 12 never aired in the UK at all, despite them releasing multiple Janemba toys.

I understand that AB Groupe enjoyed huge success with the franchise in France. As they're a French company, perhaps it's understandable that France was a bigger priority and an easier territory to deal with. Maybe the toys we had over here had originally released in France and they brought them over, again to make a quick profit.

However I do seem to remember Jerome saying how hard it was to license and release anime series in the UK. I do remember Pokemon Indigo League getting a VHS release back in the day, which was cancelled after 10 volumes despite the huge popularity. Digimon was also in the same boat. I guess that could just be a sign of the 3 episode volume format not working, as both those franchises have done great for Manga UK as complete Season DVDs.

You could perhaps make an argument that AB Groupe may have had good reason for not putting the series out. But them using the Big Green movies to test the waters simply wasn't a fair experiment.

As for Manga UK including DB Movie 1 and the GT Special on their releases beforehand, it's tough to say. It could just be one of those things that slipped under the radar somehow, like the Yamamoto score on their Kai release in 2015. Because they mostly just use Madman's releases without being able to change anything, it's entirely possible that's the reason for their inclusion. The GT Special is on the same disc as the last few episodes, and the DB movie was also on a disc with episodes, so it could have been impossible to remove them.
Top

There's some misinformation about the "Big Green" DVDs. In Britain they were published by Warner Vision International and in the Netherlands they were released by Bridge Entertainment. That said, AB Groupe had nothing to do with publishing the DVDs but making the English dub.

DBZ Movies 2-4 came out on DVD in UK whereas DBZ Movies 1-09 + TV Specials 1-2 came out in Netherlands. DB Movies 1-3 and the DBGT TV Special were only ever broadcast on Toonami UK and those who have the full recordings are keeping it 'hostage' so the rest of us can't really get an idea of what the dubs are like but assume they're as bad as the Z dubs. Although, there's a portion of DB Movie 1's "Big Green" available on the web.
Top 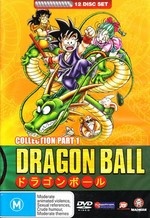 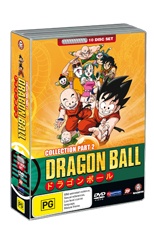