“Kami” — alternatively pronounced “Shin” — (神) is the general-use Japanese word for “god” or “deity”; at its root, it simply means “spirit”, or an aspect of spirituality. In terms of etymology, the original Chinese character for which the Japanese word Kami comes from is a compound of “altar” (礻) and “praying man” (申), literally meaning “praying before an altar”. The word also carries no implied gender, and as such it can be used to reference either male or female. While Kami can be used as a general-use term within the Japanese language, it is unequivocally tied to Shintō (神道), an indigenous religion of Japan. In Shintō, Kami are the spirits or phenomena that are worshiped, which include various elements in nature, animals, forces of creation in the universe, as well as spirits of the deceased.

While many Western fans approach the series with a certain (generally monotheistic) idea of “God” in mind, this is far from where the original author and its audience were coming from; rather, they would have had an extensive — almost bureaucratic — hierarchy of gods in mind. Akira Toriyama even explains his reasoning for introducing gods into the mix in his 30th Anniversary “Super History Book” interview:

I always turn to God in times of trouble. (laughs) Gods and aliens and other unknown beings like that make it easy to craft the story. After all, gods can do practically anything. I have my gods be straightforward and not too fussy, so that children can feel comfortable with them. The reason I give gods attendants… Well, I guess it’s because important people always need butlers, and it’s easy to develop the story through conversations.
— “30th Anniversary: Dragon Ball Chōshishū –Super History Book–” (p. 88)

The Concept of “God” in Dragon Ball

For the deities seen in the original run of the Dragon Ball manga and its animated adaptations, being a god is essentially a job, and not necessarily an inherent state of being. Each godly post centers around overseeing a certain segment of the world or universe. The gods are not immortal, and so they require successors to replace them when they die. Like all jobs, there are certain abilities and requirements necessary to qualify; for instance, the child of the Namekian Katatz had to expel all the evil from his heart before he could become the God of Earth. A certain amount of power also seems to be necessary; Karin only allows the very strong to meet Earth’s God, a necessary step in someone becoming God themselves; additionally, Enma-daiō trained under North Kaiō and is therefore fully capable of subduing unruly spirits. The North Kaiō himself is a powerful martial artist, while each of the Kaiōshin were strong enough to defeat Freeza in a single blow.

In addition, there are certain abilities that seem common among the gods. All gods seem to have some degree of clairvoyance: the God of Earth can see what is happening on the Earth’s surface from his palace far above the clouds, Kaiō can easily view things on other planets, and Elder Kaiōshin can watch women bathing from all the way in the Kaiōshin Realm. This ability is necessary for them to fulfill their duty of overseeing their various regions. Other psychic powers are also common: Kaiō and Earth’s God can speak to people telepathically, while Karin and East Kaiōshin can read minds. Kaiō can sense out and locate people — even those in an area not under his jurisdiction — by using his antennae to pick up their ki signature as if it were a radio wave. Kaiō, East Kaiōshin, and Elder Kaiōshin all have the ability to materialize objects from nothing. Earth’s God is able to travel freely between his temple and the afterlife, while Elder Kaiōshin was able to travel to the living world while dead. Earth’s God even has the ability to at least temporarily possess people, as seen by him taking over the body of Shen during the 23rd Tenka’ichi Budōkai.

Both Dragon Ball Z: Battle of Gods and Dragon Ball Super introduce the concept of gods having a unique type of ki, which non-gods are usually unable to sense. Goku and Vegeta are able to acquire this godly ki through the Super Saiyan God and Super Saiyan Blue transformations, despite neither of them being appointed as gods. This moves the concept of Dragon Ball-style godhood closer to a state of being more than merely a job, although it might be more accurate to say that acquiring this type of ki is a requirement for serving as a god. Even Dende, who started out as an ordinary Namekian, is shown to be able to sense the God of Destruction Beerus’ ki when none of the other characters can, although it is never specified if Dende has any godly ki himself (possibly only higher gods like Gods of Destruction have it, while lower gods are only able to sense it). An example often retroactively applied to this concept of sensing godly energy is Piccolo mistaking the Eastern Kaiōshin for the Dai Kaiō at the 25th Tenka’ichi Budōkai.

Yamcha Talks to Goku Through Kaiō

The gods in Dragon Ball are far from omnipotent, however. Piccolo says that not even God can resurrect the dead; only the Dragon Balls can do that (Elder Kaiōshin was however able to exchange his own life for Goku’s, killing himself in order to bring Goku back to life). Gods also lack the ability (or perhaps permission) to interfere in the affairs of places outside their own region; this is why North Kaiō was unable to do anything to help wish Kuririn back to life when he died on Planet Namek, with Namek being located outside of his own region. The gods’ biggest weakness is that exceptional beings like Freeza or Boo are able to greatly surpass them in power, forcing them to sometimes rely on other, nicer freaks like Goku and company to protect the universe. While Whis assures Goku that the Omni-King is absolutely the strongest and can destroy anything, even the Omni-King has trouble observing some of the faster fighters at the Tournament of Power, showing that he still has certain limitations.

The actual gods of the Dragon Ball world — at least as far as what is shown — do not seem to have any desire for worshipers, merely overseeing people and generally leaving them to their own devices except in times of extreme crisis. As a result, regular Earthlings are completely unaware of the God of their planet, or of the Kaiō, and even the God of Earth only knew of the Kaiōshin through rumors.

That said, certain religions do appear to exist within the “Dragon World”. Namu invokes a Buddhist prayer to Amitabha during the 21st Tenka’ichi Budōkai, and even refers to himself as a Buddhist, clearly indicating that some form of Buddhism must exist on the Dragon Ball version of Earth. Upa imitates a cross to frighten the vampiric Dracula Man, so there may be a form of Christianity as well. In Dragon Ball episode 53, a statue of Durga — one of the main forms of the Goddess Shakti in the Hindu pantheon — had been erected to protect and watch over the pirate’s treasure chest. At the 25th Tenka’ichi Budōkai, Kuririn prays to “Kami-sama” (God) that he receive a good match-up; the joke here is that Piccolo turns to him and remarks, “You know God is just Dende, right?” (which Kuririn would of course have known for many years). 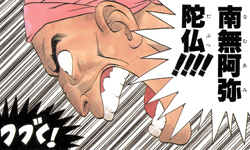 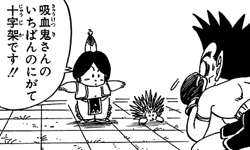 There are also various forms of religious beliefs among aliens. Daizenshuu 7 notes that the Saiyans assigned a mythical, god-like status to the Super Saiyan:

Dragon Ball Z: Battle of Gods and Dragon Ball Super have further expanded on this by introducing the Super Saiyan God transformation, which Shenlong refers to as the “god of the Saiyans”. The name and reference seem to derive from the transformation granting a Saiyan godlike power, rather than the Saiyans of old actually worshiping the individual obtaining such power as a deity.

In the “Saiyan Special Q&A” interview within the January 2018 issue of Saikyō Jump, Toriyama began to expand on the story behind the original Super Saiyan God transformation:

That is to say, very long ago, before Planet Vegeta was the Saiyans’ planet, there was a man named Yamoshi who had a righteous heart despite being a Saiyan. He and his five comrades started a rebellion, but he was cornered by combatants and became a Super Saiyan for the first time, though his transformation and fearsome fighting style shocked the other Saiyans. Outnumbered, Yamoshi eventually wore himself out and was defeated, but this was only the beginning of his legend. Afterwards, Yamoshi’s spirit wandered in continuous search of six righteous-hearted Saiyans, seeking a new savior: Super Saiyan God.
— “Saikyō Jump” January 2018 issue “Saiyan Super Strongest Comics” Supplemental Book (p. 119)

In the case of the Namekians, Daizenshuu 7 remarks that Porunga (“the god of dreams” in Namekian) was viewed as a deity in their culture. Since Porunga was created by the Great Elder, he holds a status above even Porunga, and therefore all Namekian piety is directed at him. However, in this case, it is more like filial piety shown to a parent from a child than actual religious faith or deity worship.

For Namekians, God is the one who created them. All faith is directed toward the Grand Elder, who produced Porunga, the god of dreams. However, that is not the kind of thing you would call belief in a deity; it is closer to honor and affection for a parent.
— “Dragon Ball Daizenshuu 7: Dragon Ball Large Encyclopedia” (p. 41) 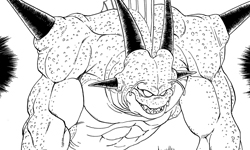 Porunga, the “God of Dreams” 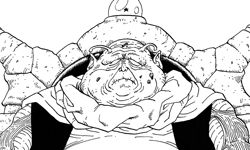 The “Racial Groups” section of Daizenshuu 4 further breaks down the Namekian society, which places the Great Elder at the top above the six other elders (such as Tsuno), each of which have a village comprised of different numbers of Dragon Clan and Warrior-Type Namekians. The villages are also said to make offerings to the Dragon Balls, themselves.

The Namekians make offerings to their gigantic Dragon Balls as if they were protective gods. The Great Elder and the other elders serve to protect the balls and defend them against misuse from outside invaders. Besides the elder, in each village there are several warrior-type Namekians to serve as bodyguards.
— “Dragon Ball Daizenshuu 4: World Guide” (p. 51)

In Dragon Ball GT there are the Loodist who worship the god Lood. They believed that by gathering energy for Lood, he would awaken and grant his followers whatever they desired. In reality, Lood was just a machine mutant created by Doctor Mu to gather energy for Baby, and Loodism was a scam religion created to further this goal headed up by Doltakki.

Previous
Gods & Cosmos Guide
Next
Connect With Us
Support Us
Your support for Kanzenshuu is what keeps us going. You can help by donating to us directly, or by shopping online at certain retailers through our affiliate links below. Every bit counts and helps contribute to our server fees and bringing you new site content, reviews, and contest items.