The governing rules of death in Dragon Ball are fairly straightforward — at least in the original manga — but they have become somewhat misrepresented through the animated adaptations as well as various international translations and dubs over the years. To begin with, these governing rules have been handed down from the heavenly deities of the afterlife since the beginning of time in order to maintain balance between the living world and the afterlife. So while these rules govern the dead, they also inherently govern the living.

As one might imagine, the afterlife is where people go when they die, and where the gods who watch over the living universe reside. Apart from the gods and the dead, the afterlife is also home to the oni, ogre-like monsters of Japanese mythology. They are portrayed as the administrators of the afterlife, assisting the judge of the dead, King Enma, a figure taken from Buddhist and Hindu mythology. Daizenshuu 7 describes Mister Popo and Karin as beings native to the afterlife, sent to Earth to assist its God. Similar assistants from the afterlife are sent to the gods of each world. Later in chapter 476, Goku reveals that time does not exist in the afterlife, although it is not clear just what this really entails, other than that using Super Saiyan 3 there is easier since time is not a factor.

When someone in the living world dies, they normally become a bodiless spirit and go to the afterlife. Every being in the living world goes to Enma’s palace to receive judgments. Even beings from the Demon Realm go to Enma’s palace when they die, as seen in chapter 478 when King Enma says that he sent Dabra to Heaven. Some special exceptions are allowed to keep their bodies in the afterlife, but even they must check in with Enma. However, those killed by members of the Demon Clan (such as Demon King Piccolo and his offspring) are unable to properly pass over into the afterlife. Their spirits are stuck forever in the living world, floating through the air suffering. Some translations refer to these souls as being “in limbo”, but this merely refers to their status of being unable to pass on to the next life, not to any special place specifically called “Limbo”. 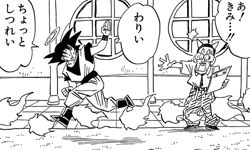 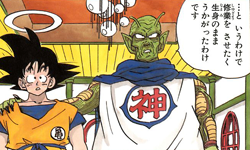 As the judge of the dead, Enma decides whether someone will go to Heaven or Hell, and approves certain exceptional people to go train under a Kaiō. People sent to Hell are cleansed and eventually reborn as new life-forms in the living world. The ultimate fate of those sent to Heaven is never made clear. The dead can also potentially be revived by the Dragon Balls, which override the natural order. The majority of those that are revived by the Dragon Balls seem to have no memory of the afterlife, while others like Goku seem to remember everything; whether or not one has a body in the afterlife might affect this, but nothing is ever stated on the matter. Furthermore, Goku tells Vegeta in chapter 511 that if a dead person is killed again, they will disappear completely from both the living world and afterlife. It is unknown if such people could still be revived with the Dragon Balls, as no case ever occurs where this would be necessary.

Travel to and from the Afterlife

Dead people can return to the living world for a single 24-hour day, usually with the assistance of Uranai Baba. The dead Elder Kaiōshin did freely travel to New Planet Namek without Uranai Baba, but as a god he may be an exception. If nothing else, some sort of teleportation ability is needed under normal circumstances, due to the separation between the afterlife and living world. In Dragon Ball Z movie 9, Goku is able to teleport back to the living world on his own for a split second. After 24 hours, the dead person must return to the afterlife, though it is not clear what would happen if they were to stay beyond this time limit. However, the 24 hour time limit does not seem to be merely an arbitrary rule, as Goku says that his Super Saiyan 3 form uses up so much energy in the living world that it lowers the amount of time that he is able to stay there. 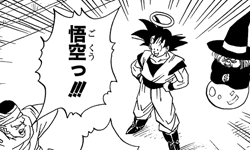 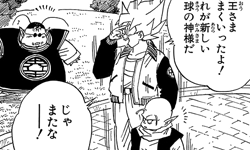 On the other hand, living people seem to have no problem traveling to the afterlife and back, but only if they have teleportation powers. Uranai Baba can travel freely between the living world and the afterlife, and Goku himself teleports back and forth to Kaiō’s planet before the Cell Games begin.

Bodies in the Afterlife

The issue of who does and does not get to keep their body after death is one rule of the Dragon Ball afterlife that has been a constant source of confusion among fans, though this confusion can largely be attributed to inconsistencies introduced by creative anime filler material. In the manga, this concept is laid out rather explicitly.

Following the Cell Games, when Yamcha tries to wish back Goku from the afterlife, Goku explains that when ordinary people and bad guys like Cell die, they become mere spirits. These are the cloud-like souls that can be seen lined up in front of Enma’s palace. Goku says that he was given special treatment, due to his saving the Earth, and so he gets to have a body in the afterlife. His body will not age, since he is already dead, and there are masters from the past in the afterlife for him to compete with. These old masters are martial artists like Goku who were allowed to keep their bodies as well due to their achievements. These may be some of the same masters who Uranai Baba hires to fight for her, like Grandpa Gohan. Later in the Majin Boo story arc, Goku mentions meeting two people from Planet Metamor in the afterlife, who taught him Fusion. 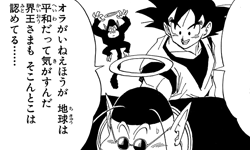 Goku Explaining Things From the Afterlife 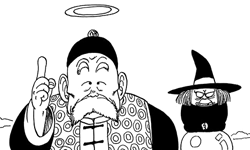 Grandpa Gohan, Back Amongst the Living

This does raise the question: where exactly do these special afterlife bodies come from? At least some of the time, it is the same body that the person had in life, but cleaned up a little. After Goku dies fighting Raditz, Earth’s God teleports his body to the afterlife so that he could use it to go train with Kaiō. The bodies of Tenshinhan and the others who die in the battle with Vegeta and Nappa do not instantly disappear like Goku’s did, but they are all later seen in the afterlife with bodies. It seems that God simply teleported their bodies to the afterlife sometime later, perhaps after they were “approved” to move on to training with Kaiō. Conversely, Chiaotzu’s afterlife body is a new one; Yamcha explains in chapter 261 that God had to regenerate Chaiotzu’s body, since he had destroyed it fighting Nappa.

Goku: But Chiaotzu blew himself to bits. Is he alright?!
Yamcha: Yeah. It seems that God regenerated his body as a special favor so he could train here.
Goku: Incredible!! That’s great!!
— “Dragon Ball Chapter 261” (p. 2)

Earth’s God himself simply fades away when he dies, just like Goku did, and so does the Great Elder of Planet Namek later on. This is perhaps a sign that they have qualified to keep their bodies after death. When Elder Kaiōshin gives his life to Goku, he does not even disappear, but just pops right back up again with a halo over his head. This is perhaps because he died in the Kaiōshin Realm, which is a special place beyond either the living world or the afterlife. This may also be due his status within the god hierarchy and is above receiving judgment from King Enma, at least not right away. The same may have been true back when Goku, Kaiō, and Bubbles (and Gregory in the animated adaptation) were destroyed when Cell self-destructed — their dead state-of-being selves appeared to remain where they were upon dying, although the group are shown flying along the Serpent Road, possibly on their way over to Enma’s anyway. This is our own speculation, however, as nothing is stated either in the series proper or its supplemental materials. 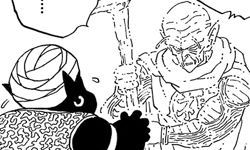 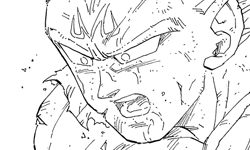 After Vegeta self-destructs against Boo, his body turns to ash and crumbles away, but King Enma gives him a new body in the afterlife so that he can fight Majin Boo, although it is never clarified how he did so. Incidentally, some of this body making happens rather quickly. When Goku, Kaiō, and Bubbles die from Cell’s self-destruction (presumably destroying their bodies), they are all seen with shiny new bodies shortly afterwards. It is seen that Kaiō can materialize objects, so it may be possible that his disembodied spirit materialized new bodies for them. This may be a case of Kaiō and Bubbles being inhabitants of the Kaiō Realm and Goku having previously been granted his body in the afterlife, or the fact that they all died in the Kaiō Realm, which is above the Enma Realm and outside the oversight of King Enma, but this is another matter which is not further clarified in the series or guidebooks.

Goku, Kaiō, and Bubbles Dead in the Afterlife

For the most part, the animated adaptation is fairly accurate in regards to bodies in the afterlife, as far as ordinary people and martial artists are concerned. The majority of the dead are portrayed as spirits, as seen in the manga, with a select few keeping their bodies under special circumstances. However, it does take liberties with the idea that evil people are not supposed to ever get bodies when they die. This inconsistency is seen when Freeza, Cell, the Ginyu Special-Squad, Bobbidi, and others are shown to have kept their bodies in Hell.

The 2015 theatrical film Dragon Ball Z: Resurrection “F” shows Freeza suffering in Hell in what looks exactly like the body he had while alive, even including his cybernetic parts. When Shenlong resurrects Freeza later in the film, his body appears in countless pieces as a result of Trunks slicing him up before he died, forcing his followers Tagoma and Sorbet to put the pieces inside a medical machine to fully heal him. Since Freeza’s body in Hell was not in pieces, this implies that his body in Hell is actually some sort of spiritual body, which returns to his sliced-and-diced physical body once he is resurrected.

Freeza Resurrected in Pieces on Earth

Freeza in “Earth’s Hell” After Being Killed Again

On the other hand, when Freeza again reappears in Dragon Ball Super’s “Universe Survival” story arc, where he is allowed to return to the living world for 24 hours thanks to Uranai Baba in order to fight in the Tournament of Power, there is no mention of providing him with a physical body. This seems to imply that the body he has in Hell is already physical, or at least physical enough to fight in a tournament.

« Previous
Gods & Cosmos Guide
Next »
Connect With Us
Support Us
Your support for Kanzenshuu is what keeps us going. You can help by donating to us directly, or by shopping online at certain retailers through our affiliate links below. Every bit counts and helps contribute to our server fees and bringing you new site content, reviews, and contest items.