The last chapter of Dragon Ball ran in Weekly Shōnen Jump 1995 #25 on 23 May 1995. The chapter concludes with a farewell message from Toriyama:

I truly thank you for faithfully reading Dragon Ball for so terribly long. I’m very grateful for how you all supported me up until the very end. The truth is that I decided on this a long time ago but a lot happened, so please forgive me for announcing this so suddenly.

For this new step in my life, I’ve asked a big favor of everyone concerned and am ending this manga. Of course, I humbly apologize to all you fans too. I’m very sorry. From now on, I think I will take a little break, and then leisurely draw one-shot works. You’ll definitely see me again. I think it (should) certainly be interesting, so look forward to it! Well, until that day, this is goodbye. Let’s meet again.

There are a lot of notable things we can take from that. First off is that in order to end the manga, Toriyama “asks a big favor” of “everyone concerned” (probably his editor, but likely also others at Shueisha or Toei Animation, as well as companies such as Bandai involved in producing series-related merchandise). This backs up the idea that Toriyama was pressured to continue on with the series, or at least that he was not fully free to end it whenever he wanted. We saw this before when Toriyama mentioned in Viz’s “Shonen Jump” that the editors of Jump made him continue during Dragon Ball‘s third year.

Also notice how Toriyama apologizes for announcing the end of the series so suddenly. It is important to remember that it was not at all common knowledge during the Boo story arc’s run in Jump that the series would be ending soon. The second-to-last chapter even has a note from Toriyama saying that “something” was going to happen in the next chapter, and that everyone should look forward to it but without “expecting all that much”. Shenlong Times #4 features a group interview with three representative Dragon Ball fans, calling them “fans among fans” and “fanatics”. Two of them were the 2nd and 3rd place winners, respectively, in the “Tenka’ichi Test” trivia contest Shueisha held, and the third was Toshihiro Suzuki of Bandai, the creator of the Super Butōden series (the 1st place winner of the “Tenka’ichi Test” could not make it for the interview, so Suzuki stepped in). Suzuki notes that “because of my job, I found out a little early that it was ending”, while Hokoto Masumoto (the 2nd place winner) says that “a few chapters before the final chapter, there was a part where Upa appeared, and I thought ‘Is it already over?’ But from the start of the Boo arc, I thought ‘surely it will end with this.'” So even a knowledgeable fan like Masumoto could only speculate that the series was ending, while people like Suzuki who were involved professionally with Dragon Ball were let in on the news a little sooner. This by the way is one of the many, many things the fake “Super Otaku Magazine” interview gets wrong. It has fake-Toriyama talk about the Boo arc as if it were just beginning, but then has him openly refer to the upcoming end of the series. For the Jump-reading public, Dragon Ball‘s end came as quite a surprise.

Even though this ending was announced at the last minute, Toriyama says it was something he had decided on “a long time ago”. It seems we finally have a confirmed case of Toriyama writing a story arc while planning well ahead of time that it would be the final one. Does this mean that Toriyama planned the actual ending of the Boo arc out in advance too? Maybe, but based on the way we have seen him describe his writing style, and on the way the Boo arc actually plays out, we should probably assume he just decided that it was going to be the ending but did not work out many details on exactly what the ending would be like.

That is the same general sort of thing we have noted all along, but the key word is “assume”. Like a lot of what we have written over the course of this guided tour of Dragon Ball‘s supposed and proposed endings, it is just a guess and not a fact… but an educated guess, we would argue, one based on all the relevant facts available. It is what seems most probable and plausible based on these facts, but it could be wrong. It could be that Toriyama did plan all the twists and turns of Boo’s countless transformations out in advance. Or maybe he did plan on Piccolo, rather than Vegeta, falling under Bobbidi’s spell, or Vegetto sticking around forever, and maybe Takeda, in an uncharacteristically strict moment, shot Toriyama down. It is not impossible that this happened, or that Toriyama drew almost the entire Freeza arc thinking it would be the end, only to be informed at the last minute that it would not be the end after all and that he had to un-kill everybody, or that the same sort of thing happened again during the Cell arc.

All-in-all, when you consider what we know about how Dragon Ball was actually made, the time frames and logistics involved, and the roles and habits of those who worked on it, none of these often elaborate and even conspiratorial ideas are likely or necessary in light of the boring truth that the series’ various quirks, loose ends, and ham-fisted plot devices can most easily be explained by the fact that it was drawn by an off-the-cuff artist who was continuously pushed along by the popularity of his creation and without any clear conception of exactly where or how it would all end. 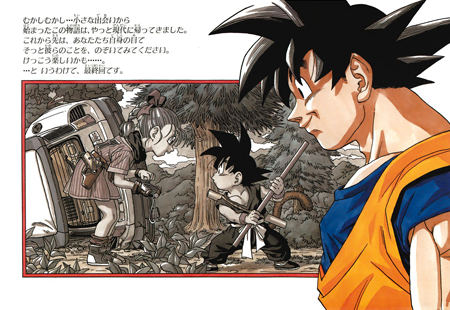