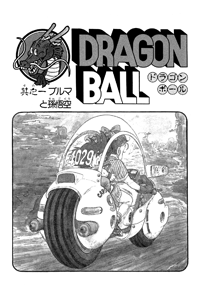 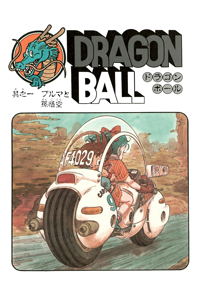 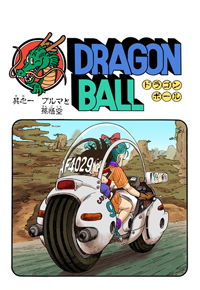 “Once upon a time, deep in the mountains, thousands of kilometers from any city… At any rate, this bizarre story begins in such a place…”

A young boy prepares to do his daily chores of cutting wood. He grabs a slice of tree, hurls it in the air, and kicks it, creating smaller pieces of wood. He then proceeds to gather and stack the wood in a pile. With his chores done, he grabs a short staff, tells a small orb (which he calls “Grandpa”) he’ll return, and departs to find some food. Elsewhere, a young girl looks out over the mountain trying to find something. She pulls out a small device shaped like an oversize pocket-watch, and finds her object of inquiry is farther to the west. Satisfied that she is heading in the right direction, she gets into her car and drives off.

Meanwhile, the boy comes to a cliff, and, looking down it, decides that today is perfect for eating fish. He jumps off, catches a branch, and springs down onto the bank of the river. He then proceeds to take off his clothes and toss his tail into the river to do some fishing. A huge fish sees his tail and tries to eat what it assumes is merely a monkey, but the boy pulls his tail out of the way and the fish flies out of the water. He kicks the fish, killing it and knocking it into the river. He swims down to claim his prize, and happily heads back home with it.

As the boy gets to the road, he hears a noise. A car comes screaming around the bend, barely missing him and his fish. Angered, he yells at the “monster” trying to steal his food. He picks up the car and tosses it, with the car landing on its side, badly damaged. The girl then sticks her head out the window, pulls out a gun, and shoots the boy who just totaled her car. Seeing the boy in pain but apparently unharmed despite being shot, the girl freaks out and can’t believe he’s not dead. The boy prepares to attack with his staff, but the girl suddenly screams that she is human. The boy stops and thinks she looks different from him. She explains that it’s because he’s a man, and she’s just a delicate girl. Having never seen another human, He wonders where her tail is.

The boy wants to know about her monster, and asks if she caught it. She explains that it’s not a monster, but an automobile. He then asks her if she came from the city. The girl says she’s from the west, and he says she should come with him to his house to have a feast because she’s a woman. As they head off to his house, she says that he’s strong for such a little guy. The boy explains that his Grandpa trained him, and that’s why he’s so strong. The girl thinks that he’s weird, but his power could be of some use to her.

They arrive at his house, and the boy tells his Grandpa that he’s brought back a woman. The girl takes a look at “Grandpa”, and suddenly cries out. She goes over to the small orange orb resting on a pillow. The boy yells at her to not hurt Grandpa’s memento, and she pulls out two more balls just like it. The boy is shocked that she has two Grandpas. She explains to him that these are called “Dragon Balls”. She further explains that there are seven balls in total, and that in the middle they have stars, going from one star to seven stars.

The boy says his Grandpa’s ball has four stars, and the girl says it’s the Four-Star Ball. The first one she found was in her basement, the Two-Star Ball. She holds up her other one, the Five-Star Ball, which she says she found about ten days ago in a northern valley. The boy wants to know why she’s searching for them, so she explains that when all seven are gathered, Shenlong, the Dragon God, will appear and grant any one wish. The boy is amazed that these little balls can do all that. The girl says that the last person to use them became a king, but the balls were scattered, which is why she’s searching for them.

The girl says she knows what she’ll wish for: a dreamy boyfriend. That’s why she needs his Four-Star Ball, but he refuses to give up his Grandpa’s memento. She decides to bribe him, by lifting up her skirt and offering to let him cop a feel. He says he doesn’t want to, so she suggests that he join her in the search for the Dragon Balls. The boy finally agrees, so long as he gets to hold onto his ball. She’s happy and thinks to herself that he’ll make a good bodyguard for her.

The boy asks how they’ll find the other balls, if they don’t know where they are. She shows him her Dragon Radar, and explains that it detects the faint electromagnetic waves put out by the balls. She shows him on the radar that the next ball is about 1200 kilometers to the west. Thinking that it’s too far to walk, she looks in her pouch for something to use, since he destroyed her car. Realizing she doesn’t know the boy’s name, she asks him, and he introduces himself as Son Goku. Goku asks the same and she says her name is Bulma, which makes Goku laugh. Goku begins to make fun of her name, and she yells at him.

Bulma pulls a case out of her pouch and decides to use the No. 9 capsule. She throws it, it explodes, and as the smoke clears there is a motorcycle. Goku accuses her of using evil magic, and Bulma explains that it’s just a Hoi-Poi Capsule. They mount the motorcycle and drive off towards the next Dragon Ball. Down the road, Bulma takes a hill a little too fast and lands hard, coming to a stop. Bulma excuses herself, but Goku doesn’t understand, and she yells at him, saying she’s a lady and she has to pee. Goku thinks she’s strange for going all the way off into the bushes just to pee. Then he hears her scream, and runs to find out what happened.

A Pteranodon has grabbed Bulma, and Goku asks if she knows him. The Pteranodon says he is going off to talk with her, and tells Goku to wait here. He ties Goku to a tree, and flies off with her. Bulma yells at Goku to come help her, or she’ll get eaten. Goku unties himself with his tail, but realizes he can’t fly. He runs to the motorcycle, starts it, and gives chase. The bike goes up a hill and flies off into mid-air, and Goku jumps off towards the Pteranodon. Goku pulls out his Nyoi-Bō, tells it to grow, and whacks the Pteranodon over the head, causing him to drop Bulma. Now in free-fall, Bulma screams in terror, and Goku throws the Nyoi-Bō at her. He lands safely on the ground and finds Bulma, suspended from the Nyoi-Bō, which is stuck into the side of a cliff. Goku laughs as Bulma wets herself. 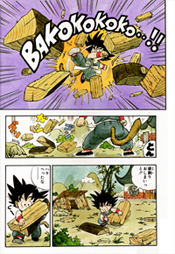 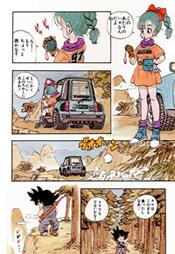 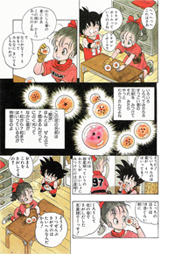