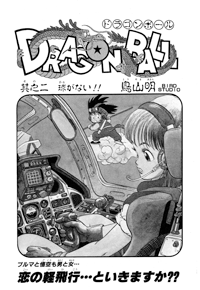 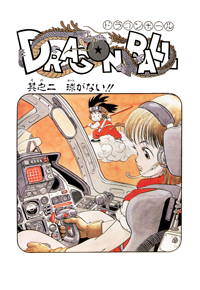 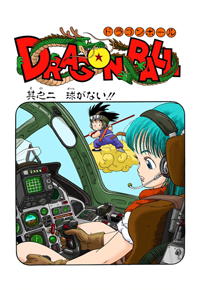 Bulma and Goku continue on the down the road in search of the next Dragon Ball. Goku thinks it should be easy to find the rest of the balls, but Bulma says he doesn’t understand how huge the world really is since he’s a bumpkin. Bulma decides this is as far as they’ll go tonight since its getting dark out and Goku is complaining about his hunger. Thinking this is as good a spot as any, Bulma stops the motorcycle. Goku asks if this is where they’re going to camp, but Bulma only laughs. She says she’s too delicate to camp, and pulls out a Hoi-Poi capsule containing a house. Telling Goku to watch out, she throws the capsule and boom… instant house. Goku can’t believe it, and thinks she really is a magic user or something. They go in, and Goku is curious why it’s daylight inside…

Bulma turns the TV on to a rock music video. Goku wonders about this guy in the TV, but Bulma wonders what stinks so bad… Goku says he doesn’t know what a bath is, and decides she should give him one. Bulma wonders something about Goku’s silly tail accessory being attached to his butt. She says it’s in the way, but Goku says its okay, and he takes the scrub brush with his tail and begins to scrub his butt. Bulma freaks as she realizes the tail is real. Goku says that maybe men only have tails, and Bulma agrees, assuming it’s possible since she’s never seen a man’s butt before. Then Goku says that his grandpa didn’t have a tail either, so Bulma decides that men don’t have tails and Goku’s just plain weird.

Bulma decides that she needs to take a bath herself, and as she’s soaking in the bubbles, Goku walks in and says her butt is in a weird place. She yells that it’s a bust, and it’s only okay for kids under ten to see. She asks how old he is, and he says fourteen. So, he’s a peeper and a pervert, and she starts throwing things at him. As Bulma dries her hair, Goku says he’s hungry and they decide to eat something.

Goku complains that the bread has no flavor, and the soup is bitter. Bulma explains that it’s coffee, not soup. So Goku decides to head out and go hunt for some better food to get his strength back. Goku later returns to the house with a centipede and a wolf hanging from the end of his Nyoi-Bō. He wants to barbecue them, but Bulma is disgusted and slams the door in his face. Goku roasts the wolf and eats it outside.

Back inside, Goku says it’s been a while since he’s slept with someone else. Bulma says that’s not where he’s sleeping, and she rolls out a spot on the floor. Goku doesn’t understand why she says it’s so weird since he used to sleep on Grandpa’s crotch like a pillow, and Bulma yells at him for thinking he could do that with her. As she brushes her teeth, she asks Goku about his parents. Goku says he just knows that his grandpa found him abandoned in the mountains when he was a baby and she figures he was abandoned since he had a tail. Goku asks if she was also abandoned for having a butt on her chest, and she yells that it’s not a butt, and she wasn’t abandoned. She informs him that she’s on summer vacation, so she only has another thirty days to find the remaining Dragon Balls.

The next morning, Goku wakes up first and notices Bulma’s crotch. He lies down between her legs, but something doesn’t feel right. He pats her crotch, then takes off her panties, and screams in horror. Bulma wakes up and asks him what’s wrong. Goku says there aren’t any balls! (Or a wee-wee, either….) Bulma quickly runs over to the Dragon Balls, and sees that they’re all there. She yells at him for surprising her like that. At the same time, a shadowy figure approaches the capsule house… 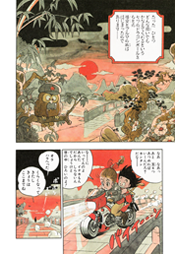 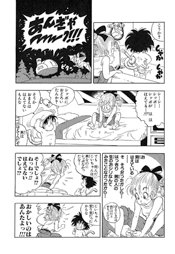 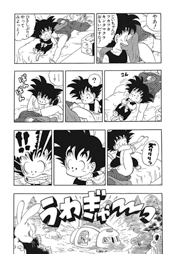