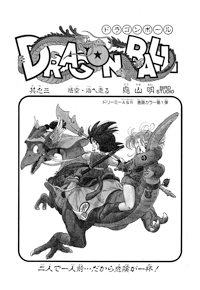 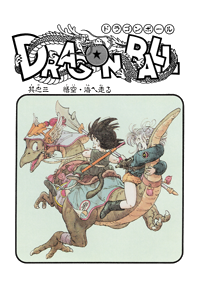 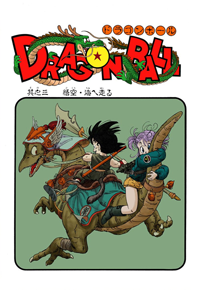 Goku – Running to the Sea

Goku can’t believe Bulma’s taking so long to get ready in the morning and tells her she moves any slower she’ll turn into a turtle. She says that she’s two years older than him, and he shouldn’t keep calling her “you”, but “Bulma-san“. Bulma decides to have some coffee, but Goku doesn’t like that bitter soup, so he goes outside to exercise. He runs around, then picks up and crushes a huge rock. He runs over to another rock, and it turns out to be a large sea turtle. Goku yells that she really turned into a turtle, and Bulma comes running outside to see what’s happening.

Finding Goku, she wonders what in the world a sea turtle is doing so far away from the sea. The turtle asks if they could spare some sea water and maybe some seaweed. So Bulma goes and gets him a bucket filled with salt water. He says he was out looking for matsutake mushrooms, and he got separated from the others and lost his way. He has been trying to find the sea for a year now. Bulma looks on the map and says that the sea is about 120 kilometers south from there. Goku says they’ll take him to this “sea” place, but Bulma says there’s no time for that and it has nothing to do with them. Goku says he’ll just go alone then, and he leaves carrying the turtle on his back. She wonders if he’ll be back, and looks around to see huge dinosaurs passing behind the house. She quickly hops on the motorcycle and catches up with them.

The three continue along, until a giant bear sporting a mohawk spots them. He demands they give the sea turtle to him, as it’s his favorite food. Bulma insists that Goku give up the turtle, but he refuses. The bear pulls out a giant sword, and Goku puts the turtle aside. The bear swipes at him a few times, but misses, and Goku jumps on the blade of his sword. He then hops onto the bear’s nose, and punches him with his Jan-Ken Gū to knock him out. Bulma and the turtle are really impressed by his strength, and Goku asks the turtle if he really is delicious. The turtle insists he isn’t and Goku agrees.

They finally arrive at the beach, where a robotic figure clinging to a palm tree informs that reader that “This isn’t Penguin Village!”. The turtle is excited that he has finally reached the sea, and Goku is amazed at the huge river. The turtle gratefully thanks Goku for helping him, and says to wait there; he’ll be back with something to thank him. Goku plays in the sea, but soon realizes that he doesn’t like the taste of sea water. A while later, the turtle returns, with a flashy old man on his back. The old man says “Hello! Sorry to keep you waiting!!” and is wearing a turtle shell on his back. 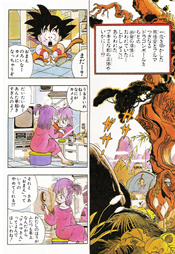 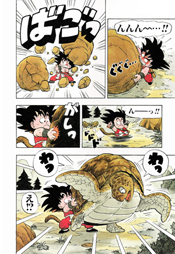 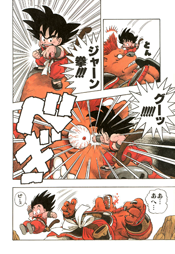