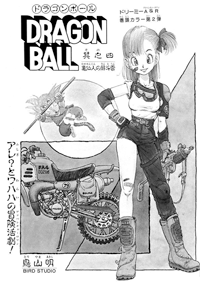 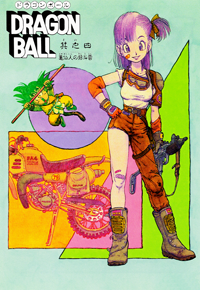 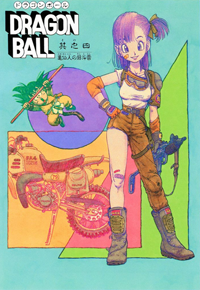 Bulma thinks there must be something wrong with this cloud since this old man is giving it to Goku. Kame-Sen’nin then tells Goku that in order to ride on Kinto-Un you must have a pure heart. He decides he should show him, but he just falls right through Kinto-Un. Goku, however, jumps on and has no trouble whatsoever. He flies off into the sky as Bulma and Kame-Sen’nin are left on the ground in awe. Bulma wants one too, and so Kame-Sen’nin asks Umigame if she also helped him. Umigame says she didn’t, and she yells at him saying that she gave him salt water. Kame-Sen’nin doesn’t have another Kinto-Un. He can give her something else instead though, provided that…he gets a look at her panties.

Bulma is embarrassed about showing her panties, and the turtle yells at Kame-Sen’nin that this is why he can’t ride Kinto-Un. Bulma finally agrees and lifts up her night gown, showing Kame-Sen’nin what she’s got. Kame-Sen’nin wasn’t expecting to see all that and wonders what he could give in return. Then Bulma asks to see “that”, the thing hanging from his neck. He says he found it at the bottom of the ocean a hundred years ago and made it into a necklace. Bulma then calls Goku down from the sky and shows him that she has another Dragon Ball. Goku says it has three stars, so it’s the Three-Star Ball.

Kame-Sen’nin wonders what this Dragon Ball thing is supposed to be and thinks he should get another look at it since this thing was so great. Bulma nonchalantly flashes him again, and so he hands it over, wishing he’d brought a camera. They part ways, and Bulma and Goku ride off down a road back to the capsule house. Bulma goes in to change her clothes and screams. Goku runs in, and finds Bulma wondering why her panties are here. Then she freaks out about not having any on when she flashed Kame-Sen’nin. Goku reassures her that it’s ok if she doesn’t have a weewee and balls. Bulma wonders if he took her underwear, and Goku doesn’t understand. She shows him what underwear is, and he admits to taking them off this morning. Then she starts firing at him with a machine gun.

Bulma puts the house back in its capsule as Goku rubs his head from the gunshots. Bulma then wants to try riding on Kinto-Un, but she just falls through. She thinks being too beautiful must be a sin. Then they set out in search of the next Dragon Ball, as Goku makes fun of Bulma for being so slow. Finally after three days, they come to a seemingly deserted village (though Goku admits to feeling people’s ki) where the fifth Dragon Ball lies. 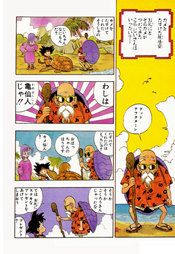 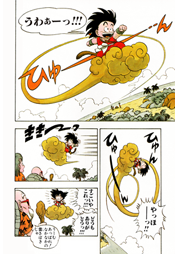 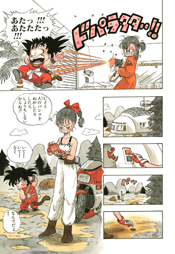