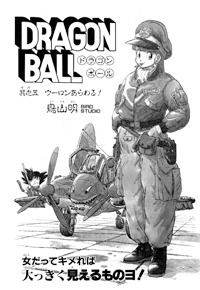 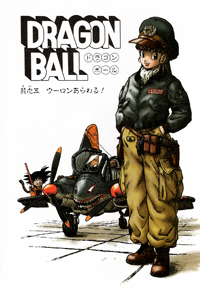 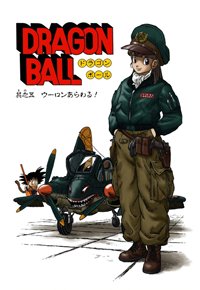 Bulma and Goku head into the empty village and Bulma yells out to see if anyone is there, but it’s still silent. Bulma checks the Dragon Radar, and sees that the Dragon Ball is definitely in village. Goku says that there are people here, and he’ll prove it. He knocks on a door (“Sherman Priest”), but there’s no answer. So he punches through the door, opens the door, and is hit over the head with an axe. Goku yells at the man, and the man apologizes to “Oolong-sama“, saying he has plenty of food or money, but asks that he spare his daughter. Goku and Bulma ask who this Oolong is. Realizing they’re not Oolong, the man invites them into his house.

The other villagers come to the house, and the man’s daughter treats the bump on Goku’s head. The man apologizes, and says that he thought Goku was Oolong, a shape-shifting monster. Bulma yells at him that they could’ve been killed, and then Goku pat-pats the daughter, proclaiming that she’s a girl! Bulma whacks him over the head for it, and then she asks the man about this Oolong. The man explains that he’s a horrible shape-shifting monster, and nobody’s ever seen his true form. Yesterday, Oolong came and said he’d be back tomorrow at noon to take his daughter as a bride. He says Oolong’s already run off with some of the village daughters. If they don’t do like he says, Oolong will eat everyone in the village.

Bulma then pulls out a Dragon Ball, and asks the man if he has one of these balls. He doesn’t, but an old woman says she has one like that, and shows Bulma the Six-Star Ball. Bulma says that if she gives that ball to them, they’ll get rid of the monster called Oolong. The old woman objects, saying Bulma can’t do it, but Bulma says it won’t be her, it’ll be… Goku pat-pats the old woman… “You’re also a girl!!” The old woman blushes as Bulma yells at him. Then Bulma has a great plan. They’ll use a decoy girl in place of the man’s daughter, and then that’ll lead them to Oolong’s hideout. Goku is volunteered, but doesn’t like wearing a dress at all. Oolong is coming, and Bulma yells for everyone to hide, and leave it to them. Then, Bulma tells Goku to go do it, and Goku asks what she’ll be doing, and Bulma says she’ll be praying.

Oolong arrives in the form of an Oni in a white tuxedo, and starts to check out Goku, thinking “she” is the daughter. Goku starts shaking, and Oolong thinks she’s scared. But actually, Goku has to take a piss. Oolong decides to transform into a more pleasant-looking form for this nervous girl. Oolong is now a handsome young man, which Bulma can’t resist. She steps out of the house, announcing her name and age. Oolong asks for her bust size and Bulma proclaims “85!!!”.

Oolong fantasizes about ‘pafu-pafu‘ with a sixteen-year-old bust, and then wonders if he shouldn’t take this older girl instead… And then he spots Goku taking a piss. Oolong can’t stand being made a fool of, so he transforms into a bull. Bulma doesn’t like the bull, and quickly steps back into the house, yelling to Goku that there’s a change in plans. Goku takes off the dress, and he and Oolong prepare to fight. 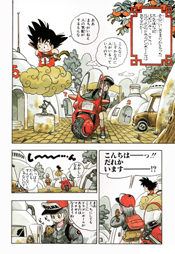 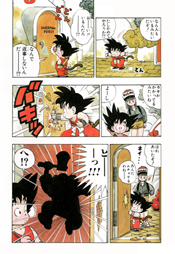 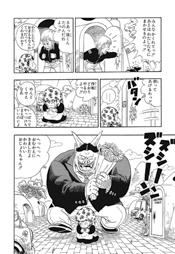