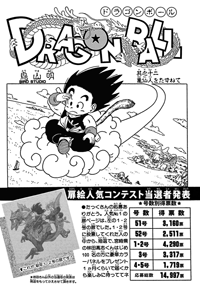 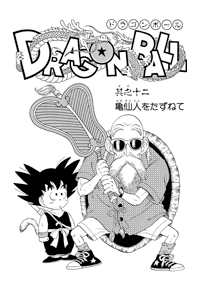 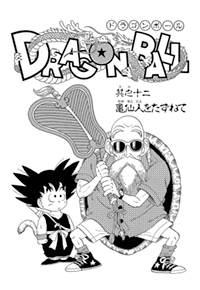 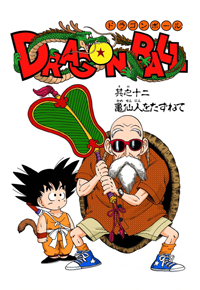 In Search of Kame-Sen’nin

Gyūmaō asks Goku where Muten Rōshi lives and Bulma says it’s probably off in the ocean from that beach. Gyūmaō is excited about going back into his castle, and then he spots Goku’s Nyoi-Bō and asks about it. Goku says he got it from his grandpa. Gyūmaō asks if his grandfather isn’t Son Gohan, and Goku says he is. Gyūmaō is excited to meet Gohan-san‘s grandson. Yamcha and Pu’er are watching from afar, where Yamcha notes that the kid has befriended Gyūmaō after all. Gyūmaō explains that Goku’s grandpa was Muten Rōshi’s #1 student, while he was #2. Bulma can’t believe that perverted Kame-Sen’nin is such an amazing person.

Gyūmaō has a favor to ask Goku. He says that the Bashō Fan, which Muten Rōshi possesses, can put out the mountain’s fire. So, he wants Goku to take Kinto-Un and go ask to borrow it. Goku asks for a Dragon Ball in turn, showing Gyūmaō the Four-Star Ball. Gyūmaō has seen one of those before, and will happily give it to Goku afterwards. This is Yamcha’s first viewing of a Dragon Ball, and is surprised at how small it is.

Goku prepares to leave on Kinto-Un, but Gyūmaō asks him to wait. Yesterday, he had sent his only daughter, Chi-Chi, off to find Muten Rōshi. Since she’ll probably be on the way, Gyūmaō asks Goku to find her and take her with. If Goku does that, she can be his bride. Goku doesn’t know what that means, and Oolong pictures Chi-Chi as a very ugly female version of her father. Gyūmaō takes out a photo of her, and Oolong thinks she’s really cute. Yamcha freaks out, as the girl in the picture is the one he’d knocked out earlier.

Yamcha and Pu’er then hop in their car and speed back to the girl. Chi-Chi wakes up and sees him, and prepares to use her helmet beam on him. But Yamcha tells Chi-Chi to wait, and she wonders how he knows her name. Yamcha says he’s sorry about knocking her out, and that he loves her. Chi-Chi’s very embarrassed, and she can’t believe this. Yamcha says to look into his serious face to prove he’s not lying, but she thinks he looks funny with that missing tooth, which strikes a nerve. Chi-Chi is very embarrassed about all of this love stuff. Yamcha and Pu’er notice Goku approaching, and take off.

Goku spots her and asks if she’s Chi-Chi. She wonders why a lot of people know her name today. He must also love her. Goku explains what Gyūmaō sent him to get the Bashō Fan, and tells her to get on Kinto-Un. Chi-Chi wonders how it’s possible to ride this cotton candy-looking thing. Goku says she needs a clean heart to ride it, and Chi-Chi says that’s no problem because her heart is as clean as a flushable toilet. She pulls on Goku’s tail to get leverage to climb up there, and he falls off in pain. Goku says his tail is his weak point, and Yamcha overhears this. Goku and Chi-Chi then fly off. Yamcha tells Pu’er that they’ll sit here, wait for them to get the sixth Dragon Ball, and then follow them on the way to the seventh. Once they’ve gathered all seven, he’ll use his Rōga Fū-Fū Ken again. Pu’er wonders if they shouldn’t go visit a dentist in the meantime, but Yamcha hates dentists, and gets even more annoyed at Goku.

Kinto-Un flies through the desert, where Goku decides to pat-pat Chi-Chi with his foot. “Yep, no weewee! You’re a girl!” Chi-Chi screams and knocks him off the cloud, but then she and Kinto-Un crash into some rocks. Meanwhile, Gyūmaō, Oolong, and Bulma wonder about them, with Bulma hoping he’s not pat-pating her. Once they’re both on Kinto-Un again, Goku wonders why she got so mad over nothing. Chi-Chi thinks that she must become his bride, having been kicked “there”. Over the ocean now, Goku decides to ask a dolphin about Kame-Sen’nin’s house, and it points them in the right direction. Kame-Sen’nin is pleasantly surprised to see him again as they arrive on his island. 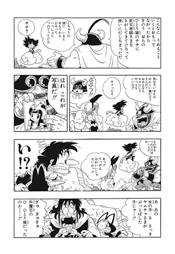 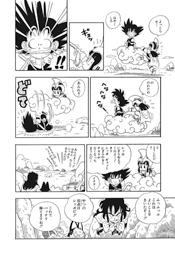 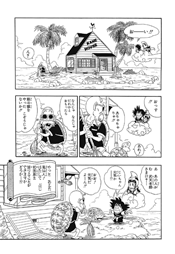