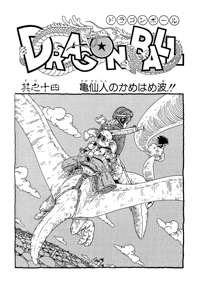 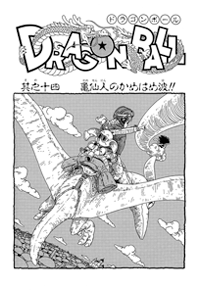 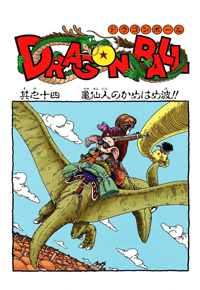 Kame-Sen’nin surveys the situation, and then calls Gyūmaō over. He lectures Gyūmaō about killing people to protect his treasure, and Gyūmaō cries and says he was overcome by greed; his treasure doesn’t matter, so long as the fire is extinguished. Oolong is amazed that Gyūmaō’s apologizing. Kame-Sen’nin nudges Goku about their agreement, and so Goku, Kame-Sen’nin, and Bulma all go aside. Kame-Sen’nin explains to her about their deal, so that he’ll put out the fire. If he doesn’t put out the flames, she can’t get the “whatever” ball. Bulma is angry at Goku for saying too much. Goku says it’s just poking her chest, and she yells at him to shut up. But she still agrees, if Muten Rōshi actually can extinguish the fire. He then makes her pinky swear she’ll do it. Now, Kame-Sen’nin will put out the fire.

Kame-Sen’nin takes off his shirt and shell, revealing his scrawny body. He asks Bulma if he’s sexy, but only gets a dirty look. He needs a boost from Goku to get up on the ledge, and then he begins. After two panels of bulking up, he goes from a bony old coot into a huge mass of muscle. Gyūmaō realizes Muten Rōshi-sama is using his Kamehameha. Yamcha has also heard of the Kamehameha, and he explains its mechanics to Pu’er.

Kame-Sen’nin positions his hands together, and aims them at the flame engulfed Mount Frypan. “Ka…me…ha…me…ha!” A huge beam comes out of his hands, and he fires it at the mountain. Goku, Bulma, Oolong, Gyūmaō, Pu’er, Yamcha, and Chi-Chi are all amazed, and then it’s done. With his work done, Kame-Sen’nin sits down to rest. Gyūmaō points out that while the fire’s been extinguished, so has the mountain and the castle. Kame-Sen’nin nervously says he overdid it, and everyone falls over. 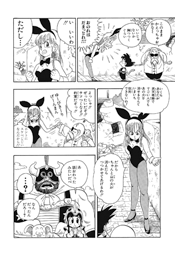 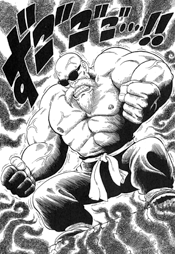 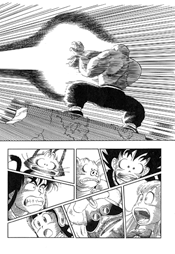